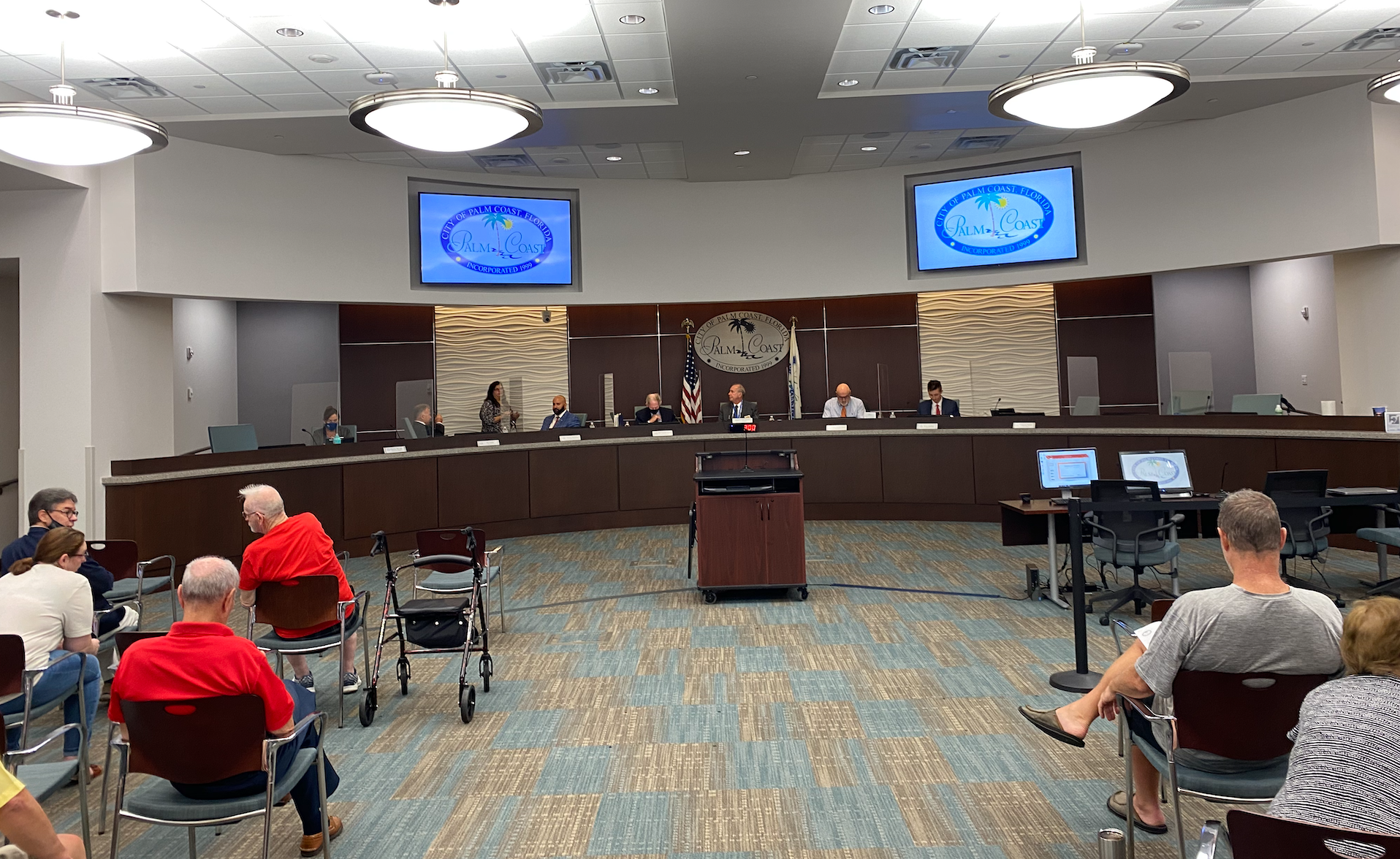 The Rule Remains the Same

Despite strong efforts from Councilmen Ed Danko and Victor Barbosa, the policy prohibiting commercial vehicles from being parked openly in residential driveways will remain the same. The Council deliberated for a considerable amount of time at Tuesday morning’s meeting, and the discussion even got heated at times. After a spirited debate between the Council members, a motion passed 3-2 to leave the policy unchanged.

In Palm Coast’s Municipal Code, a commercial vehicle is defined the following way:

“A commercial vehicle means any agricultural, construction or industrial equipment; any motor vehicle upon which advertising markings have been affixed which occupy in excess of three square feet per side; any motor vehicle having a carrying capacity of more than one ton; any motor vehicle to which has been added a platform rack or other similar apparatus designed for carrying property or cargo, but excluding a standard luggage rack; any pickup truck to which has been added a cargo box, or similar carrying device, which is located outside the flatbed portion of the vehicle, or which is located within the flatbed portion but exceeds the height of the cab portion of the vehicle; any motor vehicle equipped with a hoist or other similar mechanical equipment.” (Chapter 44, Article II, Section 44-34)

To be clear, the efforts from Danko and Barbosa were to decide to loosen the code as a broad notion; had it passed, specifics would’ve been hammered out at a later date. Mayor David Alfin handed the gavel off to Vice Mayor Eddie Branquinho early on in discussion, allowing him to make the motion to maintain Palm Coast’s current code.

A variety of public commenters took the podium before deliberation began, several of whom were local realtors. Several, including Democratic Party activist Mike Cocchiola, advocated for a referendum decision on commercial vehicles, placing it in the hands of the voters. Pam Richardson, associate broker at Watson Realty Corp and 2016 City Council candidate, had strong comments against any changes. “Commercial vehicles are breaking the rules in every size, not just the small vans as you state.” Richardson went on to call the idea of a rule-loosening, ‘foolishness’. 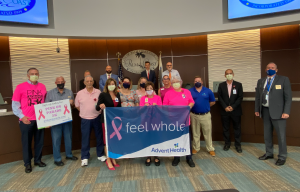 After public comments closed, Mayor Alfin handed off the gavel and made his stance known. It was an unusual approach from Alfin, who in his mayorship so far has tended to keep his stances close-to-the-vest until it came to a formal vote. Alfin is also a career realtor, but did not cite any personal experience in the realty industry as rationale for his opinion. His initial plan was to hold off on the change and do it as a binding ballot resolution.

After Alfin, Ed Danko made a long and impassioned case to loosen the rule. His first point was that many small business owners were not present to make their argument at the meeting, which was held on a weekday during business hours. He then took aim at the notion that Palm Coast was a de facto homeowners association: “We’re not an HOA. If you don’t want to see a work vehicle, move into an HOA.”

He criticized the realtors’ public comments, suggesting their advocacy to have open house signs allowed was hypocritical considering their stances against commercial vehicles. He made the case as a pro-business issue, praising Palm Coast’s ‘Be Local, Buy Local’ campaign and asserting that current commercial vehicle policies were antithetical to this slogan: “Nothing is more anti-local than not allowing people to have their work vehicles parking in their driveway.”

Danko went on to claim that getting commercial vehicles off of code enforcement’s pallet would allow them to better tackle other code issues, potentially preventing the need to spend money hiring more officers. He closed by advocating against putting the issue on a ballot: “I don’t think minority rights have any place on a referendum…That’s not America.”

Nick Klufas commented that he’d like to see realtors able to place open house signage, but that allowing some signs but not all was a First Amendment issue.

After this, an exchange started between Barbosa and Branquinho that eventually turned heated. “I’m a little confused, and I see there’s a lot of residents confused about this,” Barbosa said to open his part of the discussion. He clarified that semi trucks were not on the table, as some residents have speculated that they may be. Barbosa also questioned the statements made by the meeting’s realtor speakers, asking why they weren’t worried about property values should they be allowed to place open house signs around. At this point, Pam Richardson was shaking her head from the front row.

From Barbosa’s perspective, the role of the Council was to execute the will of the people on contentious city issues. “I don’t care if this passes or not,” he said. “My job is to bring what the residents want to the table.” He expressed that he had liked the idea of a referendum decision, but that the potential costs of doing so were enough to dissuade him from the idea (for reference, this summer’s special mayoral election cost taxpayers $127,983.15).

Barbosa also referred to his own experience as a small business owner, citing the effectiveness his own Mancave Barber Shop truck has had in attracting business. 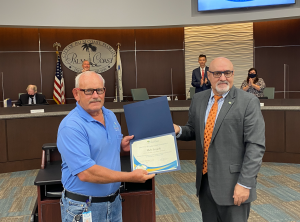 Next up to speak was Branquinho, who strongly advocated for a decision that day, and not a referendum that could take over a year. He began to reference other Council members’ statements, which Barbosa immediately objected to. The two began to raise their voices at one another, and Branquinho slammed the gavel down (he hadn’t yet ceded it back to Mayor Alfin) on multiple occasions as Barbosa spoke.

“He’s allowed to attack everyone up here but we can’t say anything to him,” Barbosa said, at this point visibly frustrated. Branquinho gaveled, and told Barbosa to let him finish speaking. “Then talk to the people, don’t talk to us,” responded Barbosa. “I’m tired of this. You’re being a little kid.” The two each accused each other of being out of order. “I’ve been sitting here quiet, listening to your garbage,” yelled Barbosa.

Once tensions simmered down between the two Councilmen, Danko requested a moment to clarify his earlier remarks about minority issues on a referendum, which Branquinho had referenced moments earlier. Danko and Branquinho’s conversation was notably more measured, standing in contrast both to the exchange that’d just happened, and to a September 7th meeting where Danko and Branquinho had engaged in a similarly amplified disagreement with one another.

Danko reiterated his point to Branquinho, who at this time still held the gavel, and things proceeded as planned.

Getting back to the specifics of what changes might take place, Barbosa posed a question: “How do you determine if [something] is a commercial vehicle?”, which earned him a nod of concurrence from Councilman Klufas. Code Enforcement Manager Barbara Grossman had a brief back-and-forth with the Council explaining some of the exact parameters laid out in the code.

Vice Mayor Branquinho then pulled things together for one final roll call vote. At this point, though everyone’s position was mostly well-established, a palpable tension had come over the chambers its attendees. Alfin made the motion to maintain the code on commercial vehicles as it was written, something he was procedurally allowed to do only since the gavel was passed to another member. Branquinho seconded. They were joined by Klufas in the final vote, with Danko and Barbosa dissenting. The code is to stay, unchanged.

The Tuesday decision represented a very tangible consequence of the results of the July 27th special mayoral election. By electing Alfin to the mayorship, a majority was formed to prevent the code from being changed this time around. Of the next two highest finishes in the six-person field, Cornelia Manfre was skeptical of making the change without a demonstrated large public consensus, while Alan Lowe expressed support for allowing larger visible signage if a majority supported it.

Toward the meeting’s close, there was a bit more back-and-forth between Council members, including Danko objecting to comments Klufas had made about him in a recent interview on TalkFlagler Weekly News Update. He refuted Klufas’s characterization that Danko had attempted to pull money from the emergency fund to pay for a rolled back millage rate.

Danko did state at the September 9th meeting, “I have no problem with tapping into the reserves,” which may have been what Klufas was referring to. Danko did, however advocate for budget cuts as a first choice to financially allow a his desired tax cut. He went on to apologize to Branquinho for comments at the September 7th meeting, where he’d told Branquinho to go back to his home state of New Jersey, calling it a joke.

City Attorney Bill Reischman reiterated to the Council the rules of decorum, asking that members refrain from personal attacks and interruptions of one another. The meeting adjourned shortly thereafter. 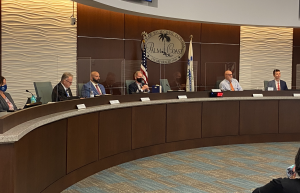