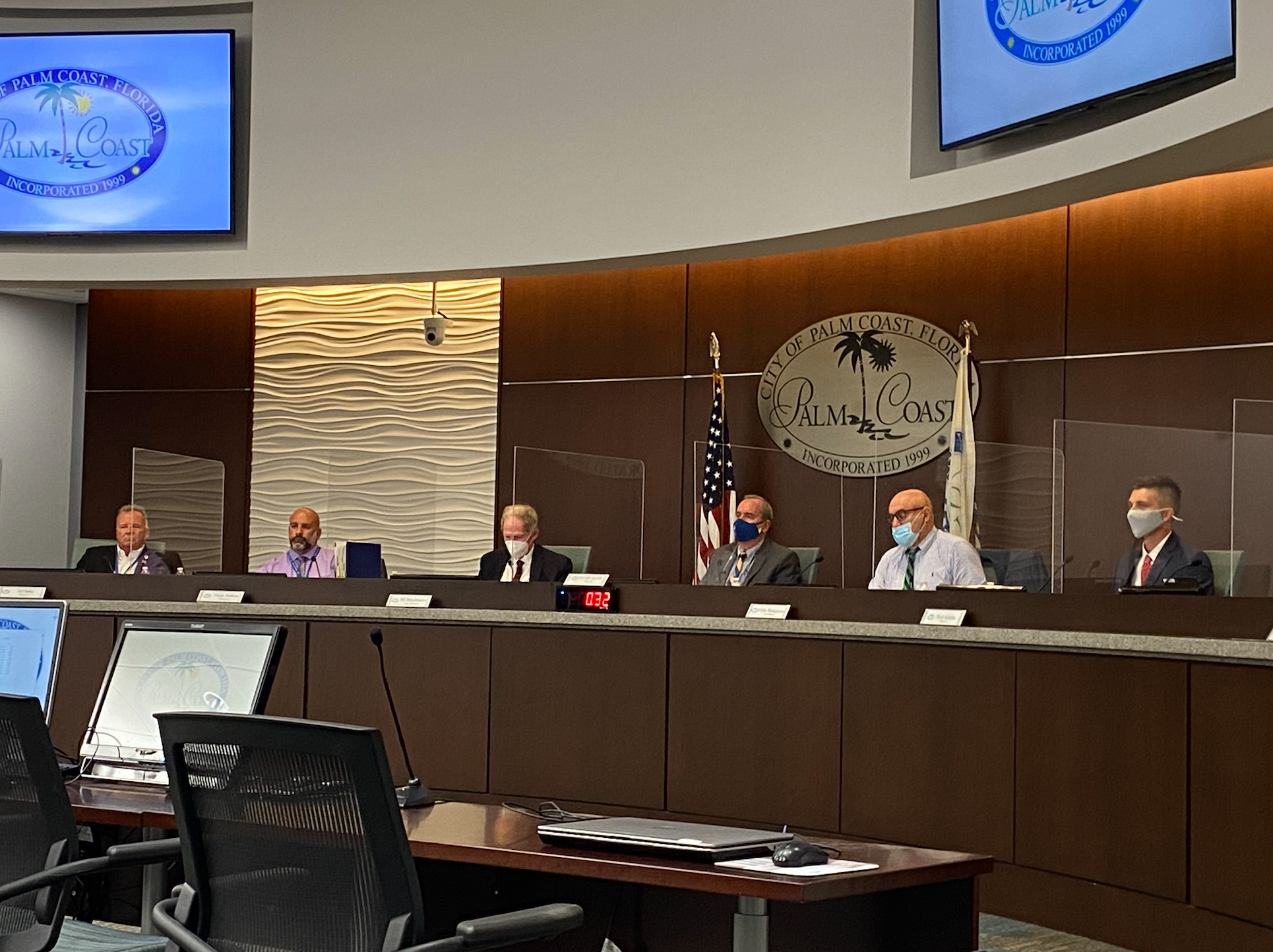 The Special Budget Workshop held by the Palm Coast City Council on Tuesday did not take long to turn into a fiery, at times personal ordeal. The initial discussion revolved around balancing spending in relation to a handful of recent spending propositions. Notably, the Flagler County Sheriff’s Office has requested funding for ten new deputies; the City’s presentation pitched the funding for four.

Also discussed were the budgetary constraints of a previously approved tennis and racquet center, the ideal millage rate to move forward with for 2022, and proposed pay and bonus increases for City employees.

Councilman Ed Danko brought up the idea of killing the racquet center to support a tax decrease in the millage rate. He asked City presenters how much that would restore to the general fund, and was told $250,000.

Danko then brought up the idea of doing away with the proposed pay and bonus increases for employees before Councilman Nick Klufas interjected. Klufas inquired with Danko about why it’d taken him until Tuesday to make such suggestions.

Danko immediately raised his voice considerably, yelling: “I’m not finished Klufas! So why don’t you zip it and let me finish. What is wrong with you? You do this every time!” At this point, Mayor David Alfin began using his gavel to call order to the Council. “Let me finish speaking without interruption from the guy at the end of the row,” Danko added. This exchange was the most recent, and perhaps the most impassioned, in a series of disagreements between Council members Danko and Klufas.

When order was restored, discussion over budgetary matters resumed. Danko inquired about the amount spent on City Attorney Bill Reischmann’s law firm, and suggested eliminating new hires. He brought up complaints he’d heard about the city’s swale system, and how there was no budgetary consideration for creating a crew to respond to the problem.

When Nick Klufas then had the floor, he took a moment to appeal to the Council’s conduct: “We’re leaders up here,” Klufas said. He went on to speak to the city losing employees to the private sector, and stressed the importance of competitive pay amidst cost of living increases.

Klufas expressed gratitude for the Flagler County Sheriff’s Office, and gave his support for the funding of new deputies. He agreed with Danko’s concerns about the swales, calling them “brutal”. He took issue with the idea of creating funds by cancelling the racquet center, saying that it would be a “staple of Palm Coast” which would provide value to residents both in recreation and child activity.

Minutes later in the meeting, the calm was once again broken, with Danko and Councilman Eddie Branquinho now engaging in a yelling match. “To hell with you!”, Danko yelled at his colleague, before telling him: “Why don’t you go back to [New] Jersey where you can be a Democrat again?”

When he received his allocated speaking time, Branquinho mocked propositions questioning the need of fire trucks locally. “This is not about politics,” he went on to say, urging what he saw as greater-good budget priorities.

Danko elaborated on his frustrations after the budget meeting concluded: “I’m tired of being interrupted by Klufas. Every time I speak he interrupts me. I’m glad to see that our attorney corrected him on that. I’m getting really tired of Eddie’s outbursts. He’s a lifelong Democrat. I wish he’d go back to New Jersey.”

Klufas naturally saw things differently: “I wish I could [expand upon the disagreement]. The outbursts seemed to be unprovoked. I’m not exactly certain what he was saying. Well, he was rebuking or really just kind of making outlandish remarks. I honestly don’t know what caused him to go off on that type of tantrum. It was unprovoked. We continued, I mean, perhaps it was an interruption, but throughout the meeting, that was a pretty mild [one] to say the least. And that was the first time that we had spoken tonight. So somebody woke up on the wrong side of the bed.”