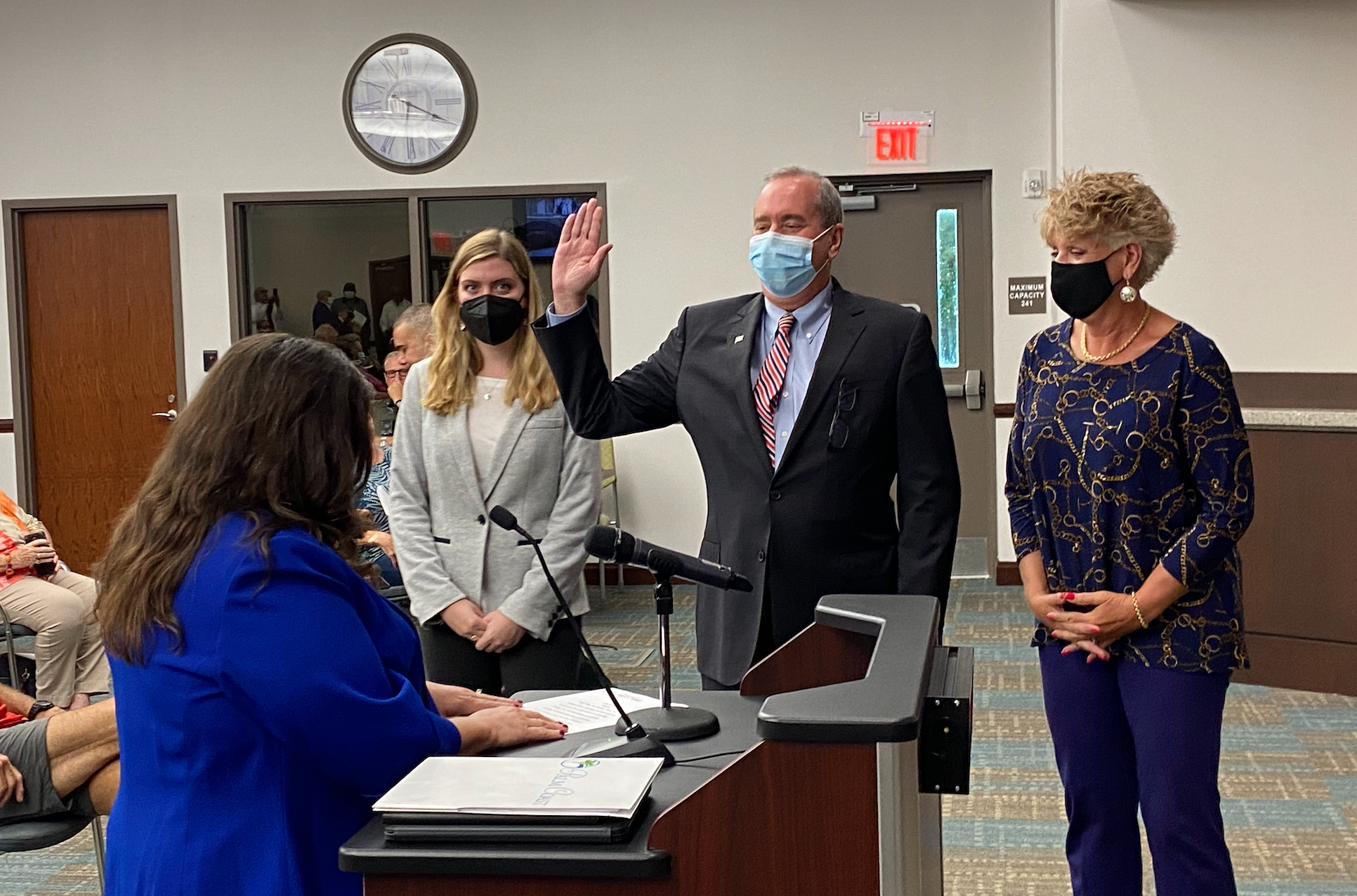 David Alfin was sworn in Tuesday evening as the new Mayor of Palm Coast. His oath of office was taken after short introductory proceedings, including the Pledge of Allegiance, public comments, and a vote to certify the election results. It was a three-man Council before Alfin took his seat, as Councilman Victor Barbosa is currently in the hospital battling COVID-19 and pneumonia. He did, however, post to Facebook during the meeting that his breathing was improving.

“We’ve worked very hard in preparation for the swearing in,” Alfin said in his last minutes as Mayor-Elect. “I look forward to moving through the agenda in an efficient and effective manner.”

There was very little contest against the election results in the opening public comments section; only six residents took the podium and two made comments related to the election. Former candidate Cornelia Downing Manfre spoke to congratulate Alfin and give well wishes to the Council. Another gentleman who introduced himself as David Willis took the opportunity to speak about a purported violation Palm Coast City Charter. He stated that the results of the election had been reported by the City before polls closed at 7:00 pm on July 27th, and that lawsuits may be incoming. Then-Mayor Eddie Branquinho instructed the gentleman that he would have the opportunity to make comments related to the election before the Council voted to certify the results. He did not reapproach the Council when that time came. Former County Commission candidate Denise Calderwood took the podium as well, criticizing Councilman Ed Danko’s outlook on property values in Palm Coast. 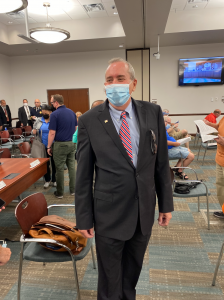 After public comments, the next agenda item was to certify election results. The Council did not have much to discuss, and quickly put it to a vote. Councilman Nick Klufas made the motion to certify, with Councilman Ed Danko seconding. The motion passed with a 3-0 vote.

Then Mayor-Elect David Alfin then approached the podium, and was administered the oath of office by City Clerk Virginia Smith. He was accompanied by his wife Tammy and daughter Melanie. When Alfin was officially sworn in, he received a round of applause from the meeting attendees, and took a moment to address the attending residents before taking his seat at the dais.

Mayor Alfin’s first agenda item of his mayorship: a presentation on the current COVID-19 situation in Flagler County. The Council learned about the prevalence of the new Delta variant, and encouraged the public to exercise caution to slow the spread. Branquinho, now a Councilman again, rebuked those who refused a vaccination, juxtaposing their community stewardship against those who serve in the armed forces. Klufas reminded residents of how overwhelmed AdventHealth Palm Coast has been by Covid cases. Alfin encouraged residents to either get vaccinated, wear a mask, social distance, or multiple of the three.

The Council then proceeded to item 5 on the agenda: “approving a revision to the land development code Chapter 10.02 floodplain management-continued to time certain date to September 14, 2021 City Council workshop with first read on September 21, 2021 business meeting.” The motion went to a vote and passed 4-0.

Next up, the Council heard item 6: “approving the amendment of the City of Palm Coast 2035 comprehensive plan, as previously amended, pursuant to chapter 163, Florida Statutes; creating Chapter 10 – property rights element.” It too passed 4-0.

Item 7 on the agenda was “approving rezoning of 10.85 +/- acres from High Intensity Commercial (COM-3) to Multi-Family Residential-2 (MFR-2) for property known as the tribute – application # 4738.” The Council heard the presentations and the ordinance passed 4-0. Branquinho brought up questions of overpopulation, labelling it as more of a concern for Palm Coast than overdevelopment. 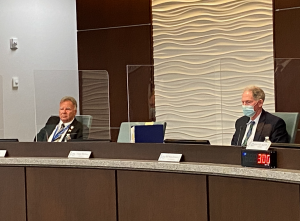 Resident Charles Bowman took the stand in the public comments section representing the Republican Liberty Caucus of Flagler County. He spoke pointedly to Mayor Alfin, snapping “don’t act like you don’t know me” at him when Alfin asked for his name. Bowman asked if he could place a Freedom of Information Act request on Alfin’s former correspondence with Jay Livingston, who was a part of these presentations about housing development. Bowman’s wife filmed his comments at the podium, and engaged in a brief exchange with a critical resident in the crowd once his comments were over.

Former mayoral candidate Carol Bacha took the podium next, providing her own perspective on the project with historical references. Resident Mark Lewis took the podium after Bacha to provide his insight on the balance between commercial and residential landspace within Palm Coast. Calderwood then returned to the podium, praising the developers who’d presented about their plans in Palm Coast.

Next up was Leslie Johnson, who praised the quality of the development plans but wondered aloud where people who move into workforce housing would work. Mark Langello followed, speaking as a developer and contractor by trade. He spoke to the value of multi-family developments as preventing the City from becoming monolithic, and being easier on the environment. Next was James Vincent, who criticized the presenters’ assessment of traffic impact. He presented high estimations of current traffic flow, and questioned whether Palm Coast’s roads could handle an additional influx.

After Vincent was Greg Blosé, President & CEO of the Palm Coast-Flagler Regional Chamber of Commerce. He praised the project, acknowledging other speakers’ concerns but ultimately declaring it to be a good idea. He also questioned Vincent’s traffic estimations. Tony Tobin came up next, and in his comments classified Palm Coast as a blooming ‘healthcare mecca’, referencing expanding hospital projects and the upcoming UCF MedNex development.

Following was Paula Lewis, a resident of the C section. She was sharply critical of the development proposal, and expressed instead an exasperation with the lack of good shopping resources in Palm Coast. The last speaker was Lisa Perkins, who also expressed her disagreement with the project. She urged the Council to address issues of water first, and echoed questions of where new residents would work within the city.

After public comments on the ordinance closed, Jay Livingston took the podium to make clarifications. He assured residents that they were not developing 246 houses as claimed, but merely added multi-family accommodations to existing development. He also stated that the housing would be high-end, as opposed to affordable in nature. Nick Klufas motioned to approve the rezoning from high intensity commercial to multi-family residential, with Ed Danko seconding. The motion passed 3-1, with Eddie Branquinho representing the dissenting vote. 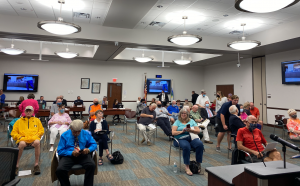 Turnout was high for one of the most pivotal city government meetings of 2021. ⓒ AskFlagler

Item 8, the last of the ordinances first read, was about voluntary annexation of a 141.5 acre area three thousand feet north of SR-100 on the east side of Roberts Road. This passed unanimously.

Next up was item 9, setting the maximum millage rate for the City. This item was brought up at the July 20th meeting, but the Council could not reach a three-vote agreement on any one rate, and balked the issue up to Tuesday’s meeting. It was required by law that the Council choose a maximum rate prior to Wednesday, August 4th. The Council again received a presentation summarizing current budget items for the 2022 fiscal year, reminding them of the information that stood to shape their imminent decision. 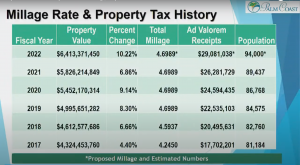 Some of the potential millage rate choices presented to the Council.

At last, the issue came to a final vote. Alfin relayed that he was quickly bringing himself up to speed on the line items in the budget, and expressed his desire to keep low the tax burden upon residents. This issue also had its own public comments section. First up was Mark Stobridge, a Flagler Sheriff’s Office chief who also spoke at the meeting’s onset. He spoke to Sheriff Rick Staly’s opposition to a millage rate increase, even with some advocating for it as a means to better fund the Sheriff’s Office and local Fire Departments.

Mark Lewis reapproached the podium as well, advocating for a conservative outlook to the budget and a decreased millage rate. Third was Jessico Bowman, wife of earlier speaker Charles Bowman. She also expressed her opposition to any increase in the millage rate. Charles then returned to the podium, and asked for a “little bit of a break” on the millage rate.

With comments over, Nick Klufas and Eddie Branquinho expressed their support for keeping the maximum rate the same: 4.6989. This was also the maximum rate in the fiscal years of 2019, 2020, and 2021. Ed Danko supported Alfin’s assurance that he’d look for potential budget cuts, and advocated for the rollback rate. He reminded Alfin of his campaign promises to be a fiscal conservative. Alfin doubled down on his commitment to review every line item in search of reductions. He did, however, support the idea of leaving the rate the same, with the rationale of not wanting to constrict the City’s budget options early on in the budget process.

Branquinho motioned for the maximum millage rate to remain the same, and Klufas seconded. The motion also included a date and time to set the ultimate 2022 millage rate, which had to be at or below the maximum rate decided upon Tuesday. The motion passed 4-0. Item 10, adding $340,392 from the Cares Act for a public service subrecipient assistant program, passed unanimously as well. The Consent items on the agenda were also approved unanimously.

First up in final comments was Klufas, who welcomed Alfin and praised the decorum of the meeting, and thanked Branquinho for his job performance filling in as Mayor between the terms of Milissa Holland and Alfin. Branquinho then spoke, congratulating Alfin and provided him encouragement. He thanked law enforcement for twice saving a juvenile in mental health crisis, and requested a proclamation thanking a good samaritan who saved 17 animals from severe neglect. Danko echoed this sentiment from Branquinho, welcomed Alfin, and wished a fast recovery to Victor Barbosa. Alfin thanked the public for their attendance and welcomed them back for future meetings.

City Attorney Bill Reischmann had no comment. Interim City Manager Denise Bevan expressed that she looked forward to working with Alfin, and encouraged citizens to complete hurricane preparedness as the season went on. The meeting then adjourned.

Along Manfre and Bacha, many other notable public figured and elected officials were on hand for Alfin’s oath of office: Elections Supervisor Kaiti Lenhart, County Commissioners David Sullivan, Joe Mullins, and Andy Dance, School Board member Jill Woolbright, former County Commission candidate Denise Calderwood, and City Council candidate Sims Jones. The overall turnout numbered in the dozens, one of the best showings of the 2021 year. Seats were spaced apart to combat the spread of the Delta variant, and many in the room appeared with masks. With his first meeting having come and gone, the Alfin era has officially begun here in Palm Coast. 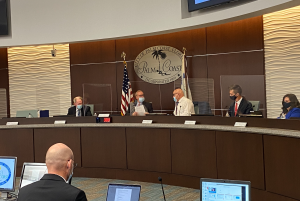