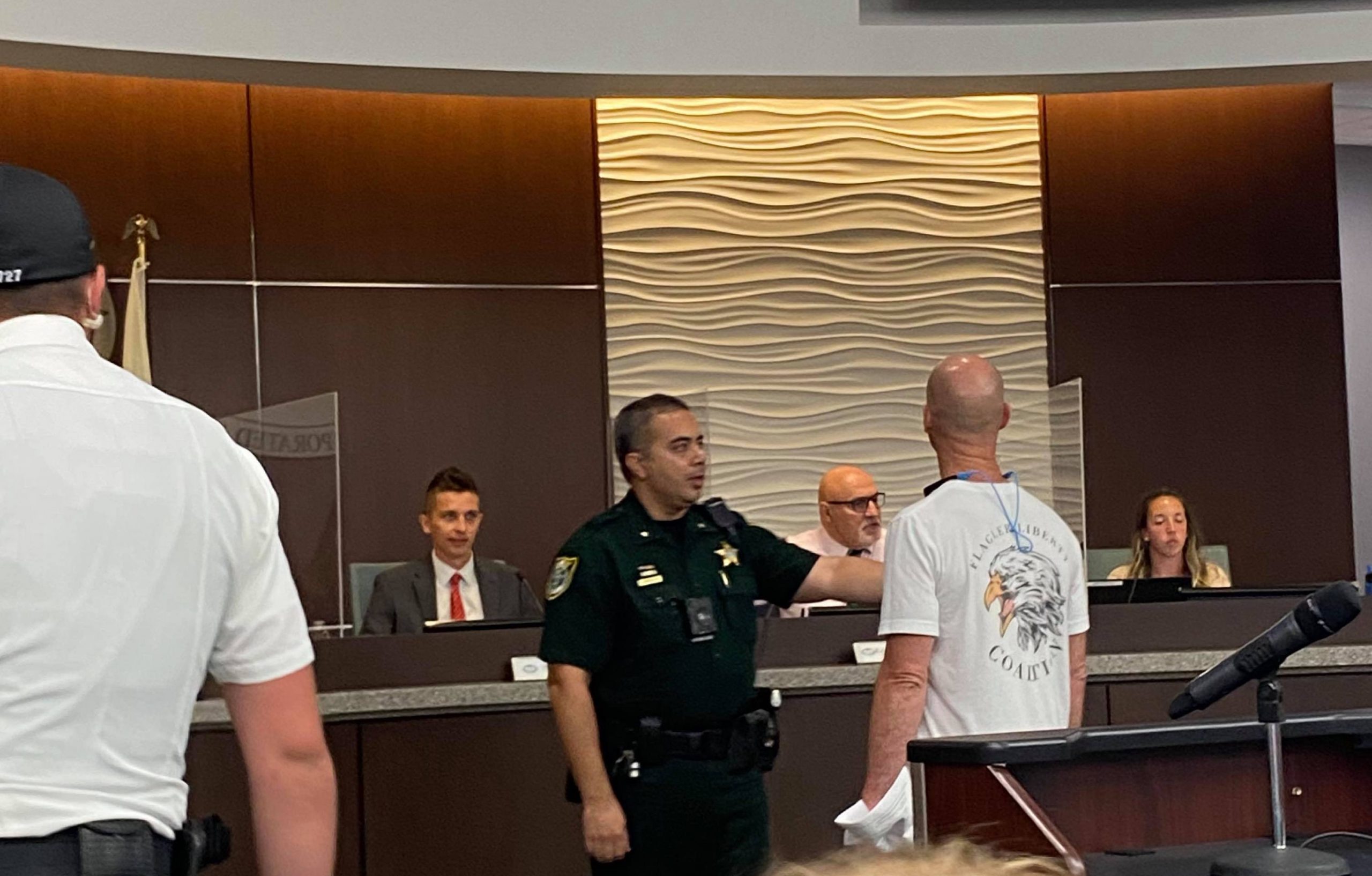 Phillips, second from right, is stopped by a deputy as he approaches the mayor's dais at last Tuesday's meeting. ⓒ AskFlagler
ADVERTISEMENT

Mark Phillips, an activist affiliated with the Flagler Liberty Coalition, is discussing plans to appeal a decision made Thursday to permanently ban him from Palm Coast City Hall. The call came after an incident in which Phillips approached Milissa Holland, Palm Coast’s mayor, at her seat on the bench during a council meeting Tuesday. 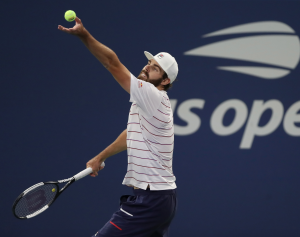 Reilly Opelka, an ATP-ranked tennis player from Palm Coast, will be the namesake of the new racquet courts. Photo courtesy of Tennis.com.

The conflicts between the Liberty Coalition and the Palm Coast City Council began during Tuesday’s meeting when the council deliberated whether to fund a new facility of pickleball courts, at an estimated $5.4 million expenditure. Leading up to the decision, attendees at the meeting were provided a window to voice their opinion on the project for the council and mayor to consider. Though several speakers voiced their enthusiastic support, Phillips and a little over a dozen others used the opportunity to demonstrate an impassioned opposition.

One point made by the group of opponents, which included several representing the FLC, was to at least take time for further study and survey before making such a steep financial commitment. More than one speaker expressed frustration that the council had even brought forth the idea, though otherwise proceedings were mostly normal.

After the public comments section of the meeting was over, it became time to vote on the courts. Before a final vote, a motion was put forth by councilman Ed Danko to table the vote until more extensive research could be done and public opinion could be accrued. Danko’s concern was specifically based on figures proposed by Alan Lowe, a political ally of Danko who’s already begun his city council campaign in the 2022 elections. Lowe put forth that construction and maintenance costs were being underestimated, and that downgrading the project to only a few courts would be a good step to move forward on the project without risking large-scale financial disaster.

Danko’s motion was then seconded by councilman Victor Barbosa. It needed a third vote to delay proceedings, but the third vote never came. The motion to table failed, and the courts moved to their final vote. The split was the same: Holland, Nick Klufas, and Eddie Branquinho in favor, Danko and Barbosa opposed. The gathering of anti-court residents was furious.

From here, much of the congregated citizens stood up to leave, including most of the Flagler Liberty Coalition. Mark Phillips had left the room after Danko’s motion failed, and he was already in the hallway when the others followed suit. According to Phillips, he thought with the courts voted on, the meeting had been officially adjourned. He then re-entered the room to confront Holland face-to-face, a common occurrence between residents and council members before a meeting commences and after it adjourns. The meeting was, however, still in session. There was a sizable chunk of the agenda left to be discussed.

As city manager Matt Morton was speaking, Phillips walked through the rows of chairs and past the speaking podium. The area between the podium and the council’s dais is generally considered off-limits while a meeting is in procession. Phillips stepped into the space and was voicing his frustrations to Holland, when the mayor exclaimed in objection to his surprise approach. Phillips stepped back in confusion as he was confronted by a FCSO deputy. Bob Paffrath, a friend of Phillips’ and fellow FLC member, joined Phillips at the front of the room before the two were seen out of the room by two deputies. 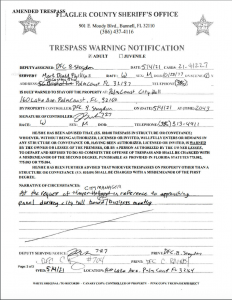 Though Phillips and the Flagler Liberty Coalition were quick to attribute the incident to misunderstanding that night, the council in the moment was clearly under a different impression. All five council members denounced Phillips’ approach as an act of intimidation, and a discussion was sparked about how to advocate with poise in a government meeting.

On Thursday, two days after the council meeting, Phillips was notified in a letter from the Office of the City Manager that he was being trespassed from Palm Coast’s City Hall building, located at 160 Lake Avenue. The full document, filed by the city clerk, indicated that the action was taken at the request of Morton. Attached were instructions for Phillips to appeal, an action which he is strongly considering pending discussion with his legal representation.

Phillips stated in bodycam footage taken by the deputy that escorted him out that he also planned to sue the city. The deputy told Phillips that Holland had requested him to be trespassed, though documents later crossed Holland’s name out and replaced it with Morton’s.

In his first statement to the press since the event, Mark Phillips told AskFlagler in light of recent events:

“I would like to know the answer to my question. How could the mayor and her two pals vote down a common sense motion to table the $15 million+ pickleball stadium, until, at the very least, we find out how much this is costing the taxpayers of Palm Coast. They didn’t have to spend the money for a couple years! So, to not table the motion until we find out some logistics on a $15 million+ pickleball stadium shows total lack of responsibility and malfeasance in my opinion on the three sitting council members! They rammed it through without the public knowing. Two of them have taken part in events at the tennis center, this brings into question how this project made it to the top of a list of 25 projects that have been outlined for Palm Coast. When they couldn’t table something this big with zero information it really shows who is up there working for the people and who is up there working for their own selfish interests!

“One thing Branquinho and Klufas like to rub in the public’s face is they were voted in so it’s their decisions we live with. These two guys need a lesson in civics. Just because they were voted in does not give them the right to ignore the will of the people! Victor Barbosa got it right when he said I stand with the people, I vote to table. Ed Danko got it right as well when he made a common sense motion to table the project. As far as me approaching Holland to ask her that question, I was outside in the hallway, saw people come out, so I backed up, looked back in the room, I saw people standing, talking and I thought the meeting had just ended or was in recess or something…I didn’t hear anyone talking from the front of the room. Simple mistake that was blown way way way out of proportion by the cities propaganda press.”

Though the city council decided with a 3-2 vote to move forward with the pickleball courts, opponents of the project are far from finished in voicing their frustration and advocating for its cancellation. ‘Stop Pickle Ball Stadium’ is a new Facebook group created with the intent of organizing to try and halt the project in its tracks. Mark Phillips and Bob Paffrath represent two of the group’s four administrators. 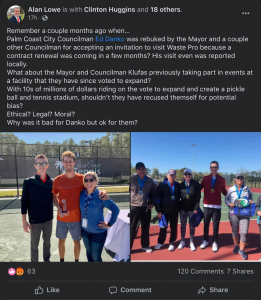 These residents’ frustrations with the council spilled out into a heated Facebook debate on Saturday, where Alan Lowe posted two pictures showing occasions on which councilman Nick Klufas had been present at tennis and pickleball facilities in the past. Lowe recalled an incident in which Klufas had rebuked councilman Ed Danko for visiting a Waste Pro facility in the leadup to the company’s contract being renewed, and implied that Klufas having a presence at the courts before voting on their expansion contradicted his previous criticism of Danko. Many other opponents of the courts who were Facebook friends with Lowe chimed in with agreement, criticizing Klufas for purportedly acting with a double standard.

“Ed Danko met privately with a bidder for an upcoming waste removal contract. The first picture is from the Palm Coast ATP Futures event award ceremony and the second is from one of the Palm Coast Pickleball tournaments (there is another upcoming in May, you’re invited.)”

Lowe responded arguing that Danko was forthcoming about his visit, whereas Klufas had failed to disclose his ‘involvement with the sport’ at the time of the vote, implying a potential conflict of interest. Klufas affirmed that had in fact disclosed his involvement, and asked Lowe “What color is the atmosphere on the planet you live on?”. From there the other commenters, almost universally on Lowe’s side (given, they were mostly Lowe’s own Facebook friends), quickly defended the ’22 council candidate and touted him as a Christian and defender of the Constitution. This prompted Klufas to bring up Lowe’s former sovereign citizenship, a designation Lowe held for a time in the 90’s in which he denounced the United States government. Klufas, Lowe, and a host of commenters exchanged pointed debate on ethics and the duty of government officials, not likely leading to any changed minds.
Moving forward, construction is expected to begin on the Reilly Opelka Racquet Center around December, but not without the impassioned resistance of those like the Flagler Liberty Coalition and their new Facebook group.
In this article:alan lowe,ed danko,FCSO,flagler county sheriffs office,flagler sheriff,milissa holland,nick klufas,palm coast,palm coast city council,Palm Coast Mayor