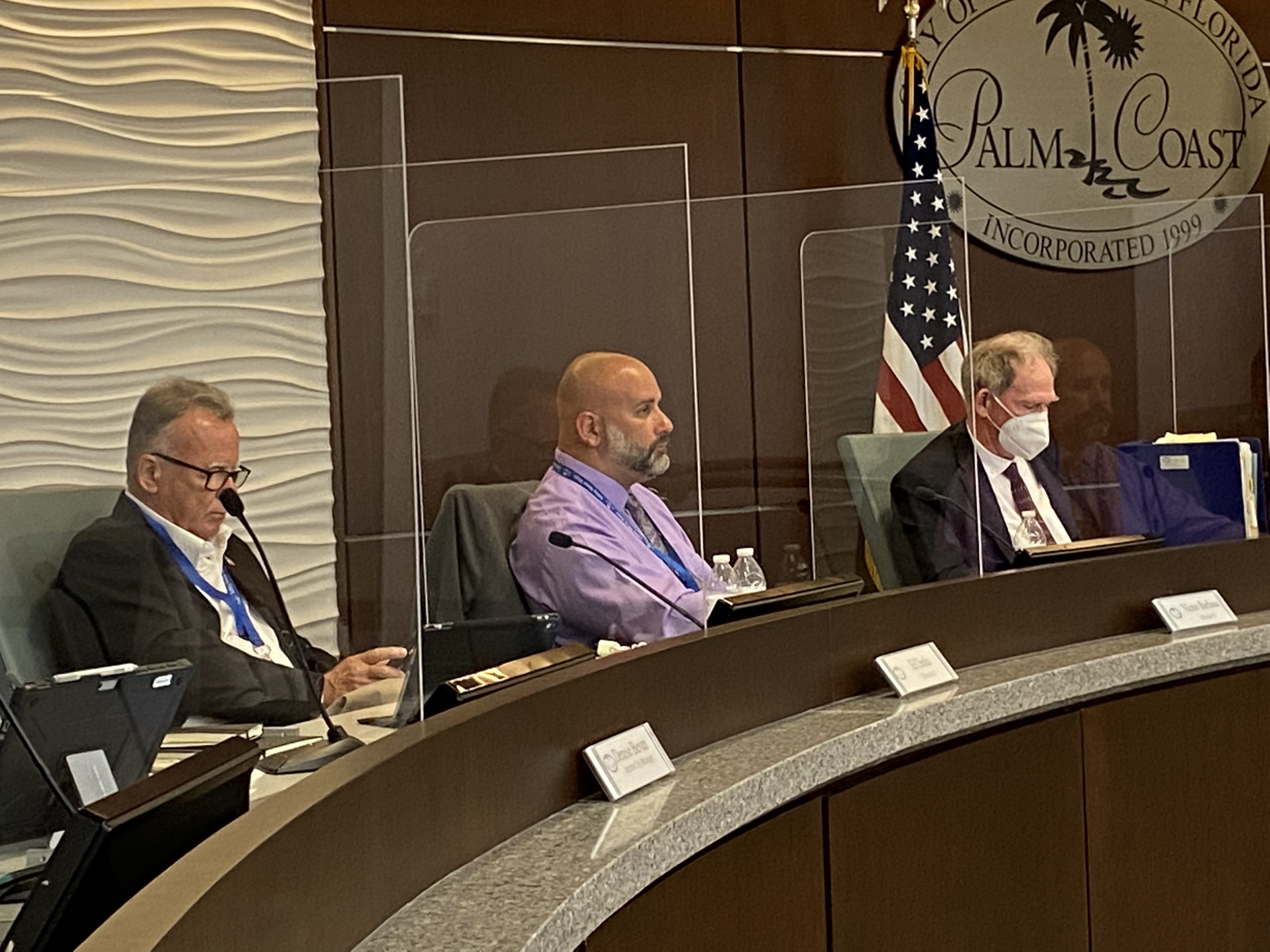 Following a tumultuous budget workshop, the Palm Coast City Council met in regular session Tuesday night to conduct four proclamations and hear a handful of presentations, mostly proposals for rezoning throughout the city of Palm Coast.

First up on the evening was the Presentations & Proclamations portion of the agenda. The four topics outlined on the schedule were each slam-dunk causes of celebration, a much needed respite from the tensions of the budget meeting just minutes earlier.

Second was the presentation of the Photo Contest winners. Palm Coast holds an annual contest to take photos of a variety of sights and scenes around the city. This year’s awards were broken down into six categories. Only two of the six winners were on hand at the time of presentation, but both were ecstatic to receive their honors before the Council gathering.

Next, Councilman Victor Barbosa took to the podium to present about National Recovery Month, a designation for the month of September to support those in recovery from addiction. Standing with Barbosa were representatives from Flagler Open Arms Recovery Services, a local organization which aims to help individuals who’ve battled substance abuse. Barbosa commented before his speech that his breathing was still somewhat impaired following his hospitalization for COVID-19 and pneumonia in late July.

After these presentations, the Council moved on to Ordinances Second Read and Ordinances First Read. There was a brief exchange between Mayor David Alfin, Councilman Ed Danko, and City Attorney Bill Reischmann regarding a potential ex-parte communication by Danko relating to Item 9 (Approving Rezoning Of 10.85 +/- Acres From High Intensity Commercial (COM-3) To Multi-family Residential-2 (MFR-2) For Property Known As The Tribute – Application # 4738). Danko had engaged in a Facebook comment conversation in which, while discussing the project with constituents, he alluded to how he thought then-mayoral candidate Alan Lowe would’ve voted on the issue. Lowe weighed in independently in the same comment section. Though Danko was unsure whether this exchange met the criteria of an ex-parte communication, he declared on the record that if it did, he had engaged in it.

On Item 11 (Seminole Pointe, Application No. 4820 to Rezone 71.74 +/- Acres From The Master Planned Development (MPD) and General Commercial (COM-2) Zoning Districts to The Multi-Family Residential-2 (MFR-2) and High Intensity Commercial (COM-3) Zon), Councilman Eddie Branquinho spoke up to describe an employment offer his wife had received from a representative of the project. Due to this fact, he chose to recuse himself from the vote based on potential appearance of impropriety. The item passed 4-0 with the absence of Branquinho’s vote.

The final item on Tuesday night’s agenda was to appoint a member to the Flagler County Housing Task Force/Affordable Housing Advisory Committee. The committee, which Mayor Alfin had once chaired, had an opening that the Council was in position to fill. Alfin questioned whether the matter had to be resolved that night, to which City Clerk Virginia Smith clarified that it did not. The decision was made to look into increasing the applicant pool.

In the portion of the evening dedicated to non-agenda topics of discussion, a few matters came up. Councilman Danko observed that the Council had still not held a vote on commercial vehicle code within the city, but was satisfied to learn that a presentation would be held at the next workshop meeting. Danko also took a moment to dispute an assertion made by Branquinho at the workshop that he had relation to the Flagler Liberty Coalition, a group whose members had previously been involved in moments of great confusion within City Hall. “These people that cause problems here at City Hall are part of a group that I have no membership in,” Danko said. “I’m not part of the Flagler Liberty Coalition at all…I have nothing to do with those folks.” Danko clarified that he was a member of leadership in the Flagler Trump Club, another large conservative group in Flagler County.

Councilman Barbosa was critical of the conduct at the workshop meeting, namely the exchanges between Danko and Klufas & Branquinho. “It’s time to put things aside and move forward. We’re here to help the city.” Barbosa also inquired about burnunf within city limits.

Klufas echoed Barbosa’s questions about burning, and congratulated Palm Coast’s own Reilly Opelka for a fourth-round appearance in the U.S. Open of tennis.

Branquinho’s comments came with a weighty accusation levied at Danko and Barbosa: according to Branquinho, a Facebook post in July documented the two speaking about government matters away from a Council meeting, thus violating state transparency laws. “July 26th at 6:05 pm there’s a video of two councilmen here at this dais who clearly violated the Sunshine Law.” The only post on Danko’s timeline matching the time Branquinho described shows the two together at a campaign event for Alan Lowe.

City Attorney Bill Reischmann commented that if such a violation had occurred, it could only be investigated at the state level.