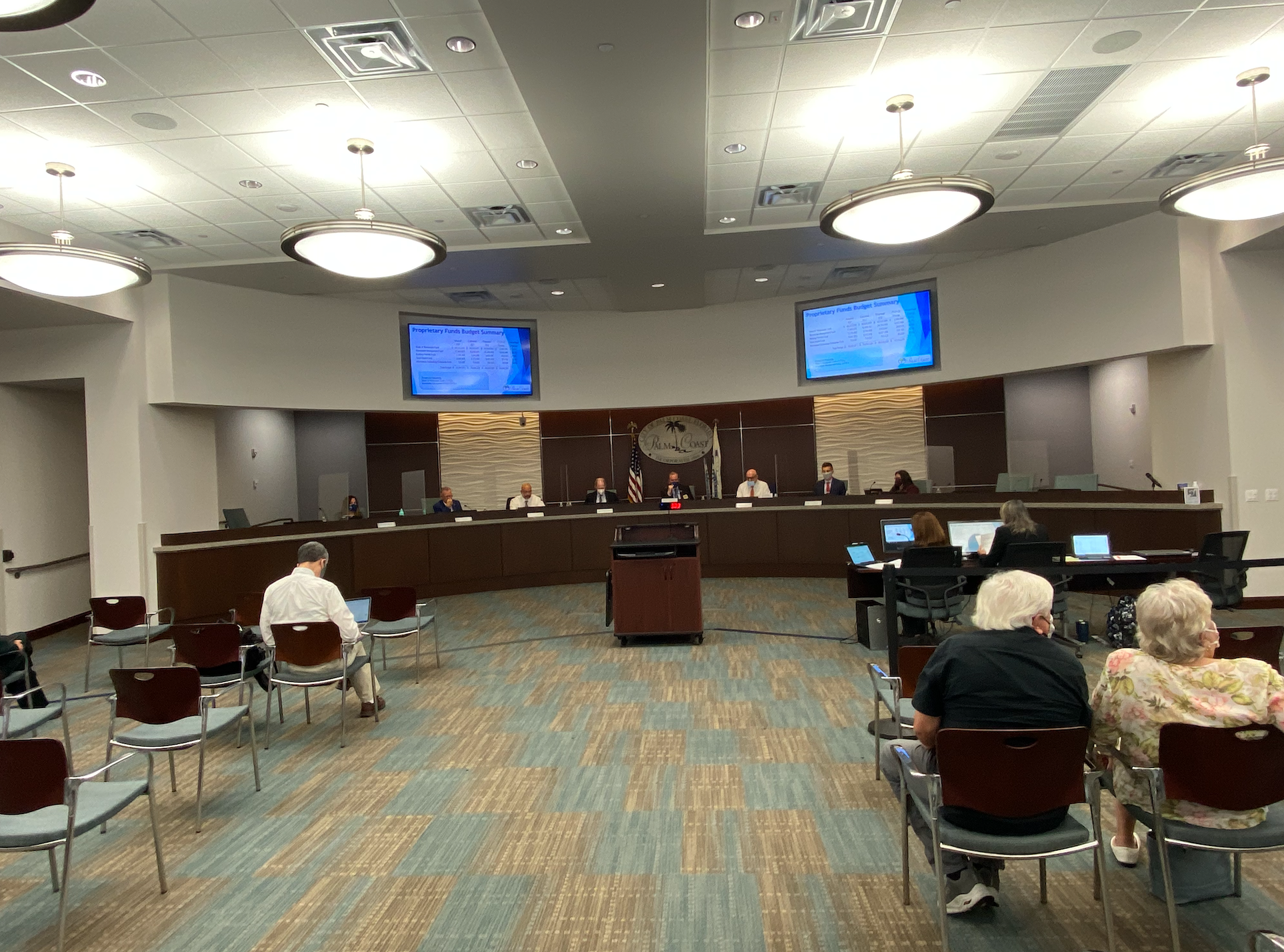 The Palm Coast City Council voted Thursday night to adopt the millage rate for the 2022 fiscal year. They wound up picking a 4.6100 rate, which is a decreased rate from this year’s 4.6989. Based on parameters the Council gave itself on August 3rd.

The three votes which placed the rate at 4.6100 were from Mayor David Alfin and Councilmen Victor Barbosa and Nick Klufas. The two dissenting votes each had different proposals for the rate. Eddie Branquinho wanted it at 4.6989 (the maximum) in order to ensure a robust support for local fire and law enforcement. Ed Danko pushed hard for a rolled back rate of 4.4593, in order to give the maximum possible tax cut for Palm Coast homeowners.

It is worth noting that the new 4.6100 millage rate is a tax decrease by rate, but will likely result in higher taxes paid for homeowners whose home values have risen over the last year.

At the onset of the meeting, Mayor Alfin took a moment to speak as a mediator of the Council. Just two days out from heated exchanges between three Councilmen, Alfin seemed to encourage his colleagues to remain respectful of one another’s time and try to focus on passing the budget items. “We each have different views and opinions regarding the agenda,” Alfin said. “We must form a consensus and majority vote to approve budget items this evening.” 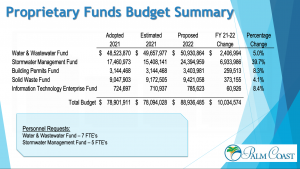 Opening the evening meeting was a presentation from the city finance department, categorically breaking down budget projections for the 2022 fiscal year. The first area was the Proprietary Funds Budget Summary. Of note, the projected budget for Stormwater Management was up 39.7%, and each of the five categories were higher than they were for 2021. The funds for Water & Wastewater and Stormwater Management called for seven and five new full time employees. 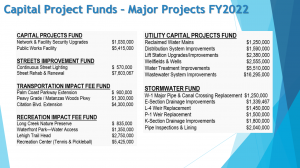 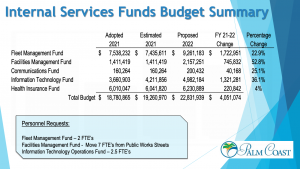 The Internal Services portion of the presentation outlined different areas of funding within the City government’s operations. Each of the five categories see an increase for 2022, including the Facilities Management Fund which is set to increase by 52.8%. 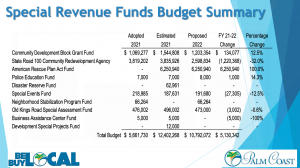 Of the different categories within the Special Revenue Funds Budget, four were set to decrease in 2022 compared to three that will increase. The American Rescue Plan Act Fund will account for $6.250m of funds for the city both in 2021 and 2022. 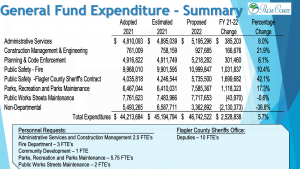 In discussing the General Fund, the Council took the opportunity to reflect on the importance of the Palm Coast Fire Department and Flagler County Sheriff’s Office as public safety agencies in the community. Sheriff Rick Staly had requested funding for ten new deputies to patrol Palm Coast.

The Non-Departmental portion of the General Fund saw a dip of -38.8%, a change the presenters attributed to the MedNEX initiative no longer taking up budget space next year.

Councilman Nick Klufas proposed a phased approach to Sheriff Staly’s request, providing the funds over time as opposed to all at once. He also inquired on how soon the funds will convert into trained, serving deputies. There to answer the question was Chief Mark Strobridge, who often attends Council meetings as a representative of the Sheriff’s Office. Strobridge spoke to an efficient recruiting process, and a quick turnaround for the community to see the fruits of the additional funds. 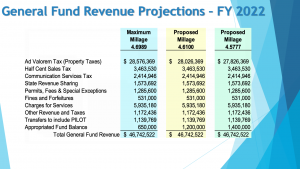 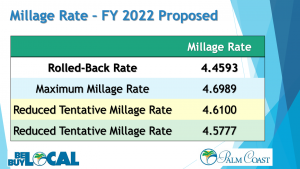 One important aspect of the General Fund: Palm Coast’s millage rate. The rate has been a topic of contention in recent months, with the Council taking multiple tries to reach a majority vote to set the maximum millage. That maximum was decided to be 4.6989, thanks to a 4-0 vote last month (Victor Barbosa was hospitalized for COVID-19 and pneumonia at the time).

With a ceiling of 4.6989, the Council now had to set the actual millage rate for 2022. It soon became apparent that there were three different opinions between the five members, potentially threatening the ability to achieve a three-vote majority. Ed Danko has been vocally in favor of a rolled-back millage rate of 4.4593, which would set the lowest proposed property tax rate for Palm Coast homeowners.

Also put forth was a rate of 4.6100, which would still represent a rate decrease for homeowners, but not as much as Danko’s proposal. This idea quickly garnered the support of Klufas and Barbosa, with Alfin abstaining from weighing in before his fellow Councilmen.

The third option proposed was to adopt the maximum rate of 4.6989, which Eddie Branquinho supported. Branquinho reasoned that a higher tax revenue gives the City the maximum freedom to support the police and fire departments.

In discussing Danko’s proposal, Councilmen Klufas and Branquinho expressed a weariness to dip into the City’s reserve fund to offset the lower revenue of a rolled-back rate. “We shouldn’t be proud of having to transfer out of our savings for a placement program if we don’t actually think it’s an emergency,” said Klufas. “I don’t think we should be hitting our reserve funds.”

Danko was wholly unopposed to doing so if it meant the lower millage rate: “I have no problem with tapping into the reserves.” He pointed out that in the event of a disaster like a major hurricane, FEMA’s contributions to recovery would be enough that a lessened reserve would not cripple the City. 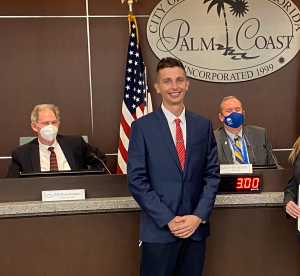 Councilman Branquinho’s criticism was somewhat more pointed than Klufas, telling Danko: “Touching the reserve funds is the easy way to govern. It’s the one that doesn’t require much intelligence on our side.”

Seeing that using the reserves to fund a rollback rate wasn’t likely in the cards, Danko went to a second plan. Without immediately elaborating, Danko asked Alfin if he could make a motion. Alfin asked, and Danko agreed, to hold off until the financial department fully concluded their presentation.

Victor Barbosa, who has traditionally erred on the side of lower taxes, expressed his disagreement with the way the Council had debated the issue in recent meetings. “Hard decisions are hard decisions,” Barbosa said. “We need to stop attacking other people’s decisions.”

With the presentation concluded, Danko made his move, motioning to ax the proposed tennis and racquet center after strongly indicating he’d do so ever since the courts were first proposed. “We’ve made virtually no effort to make any cuts,” Danko said, echoing a longtime assertion that the City should slim down its budget.

Danko had a brief conversation with Carl Cote, the City Director of Stormwater & Engineering on how much money the City could recover by ceasing all future expenditures on the courts. After some deliberation, Alfin offered to formally revisit the courts at a later date complete with a presentation from the finance department. Danko agreed, and the courts survived another meeting.

Still, Danko’s efforts to kill the courts struck a nerve with Klufas, who questioned Danko’s familiarity with the City’s amenities as a whole. Klufas attempted to voice this sentiment to Danko through Alfin, who was putting forth his best efforts to keep the meeting civilized. “What’s the last amenity that you used?”, Klufas asked Danko via Alfin.

The Mayor declined to prompt a response from Danko, calling the query irrelevant to the topic at hand. Danko did insist on a reply though, saying that he uses the canals in and around the C section and that they currently represent a more pressing need for amenity funding. “To me, quite frankly, that’s the most important amenity we have in Palm Coast,” Danko said.

After this, the discussion did return to the millage rate, and Alfin took the Council’s temperature on their preferred numbers. Klufas backed 4.6100, Branquinho advocated for 4.6989, Barbosa concurred with Klufas, and Danko stumped again for 4.4593.

Alfin, who’d kept his own opinion close-to-the-chest until now, indicated that the Council had a majority and attempted to put it to a vote.

City Attorney Bill Reischmann then interjected to remind the Council that they were legally required to take a quick recess to make a decision as the SR-100 Corridor CRA Board before voting on millage. It was a little anticlimactic, but the Council complied. 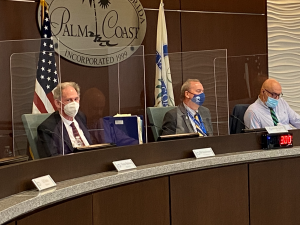 In its recess, the Council had to officially reconvene as the SR-100 Corridor CRA Board, a separate entity than the City Council, despite containing all the same people. After quickly moving through that order of business, the Council reconvened as a Council again, eager to move onto the official millage rate vote.

Victor Barbosa then tried to make the motion to approve the millage rate, before Alfin asked the Council for any final comments. Danko inquired with the finance team about the City’s interest return rate. Barbosa’s motion was then put to the floor, advocating for a 4.6100 millage rate. Klufas seconded.

Ed Danko took the opportunity to make one final case for the rollback rate. “I think this is a mistake,” Danko said. “I think we’ve not looked at any place to make cuts. I certainly am in favor of the ten deputies the sheriff requested, that’s the only thing in this budget I really like.” He advocated for Palm Coast’s homeowners as the Council’s direct constituents on the matter, and even demonstrated his agreement with Cocchiola as a sign that a tax cut was in order. His plea would, of course, not be a difference-maker.

Barbosa spoke against cancelling new hires, as Danko has recently suggested. “If we don’t hire people now, we’re going to be so far behind,” Barbosa argued. He concluded that the 4.6100 rate was a happy medium that was necessary to prevent this from happening.

Eddie Branquinho remained steadfast at setting the rate at the maximum 4.6989. His argument centered around praise for the fire department and Sheriff’s Office, but was also futile in stopping the majority.

“I am not a political poker player,” added Alfin. The Mayor stressed his commitment to public safety, and made the case that this millage rate would allow the city to invest in it adequately.

The motion to set the millage rate at 4.6100 passed 3-2, with Ed Danko and Eddie Branquinho dissenting. The final budget hearing will be held on September 22nd, 2021.