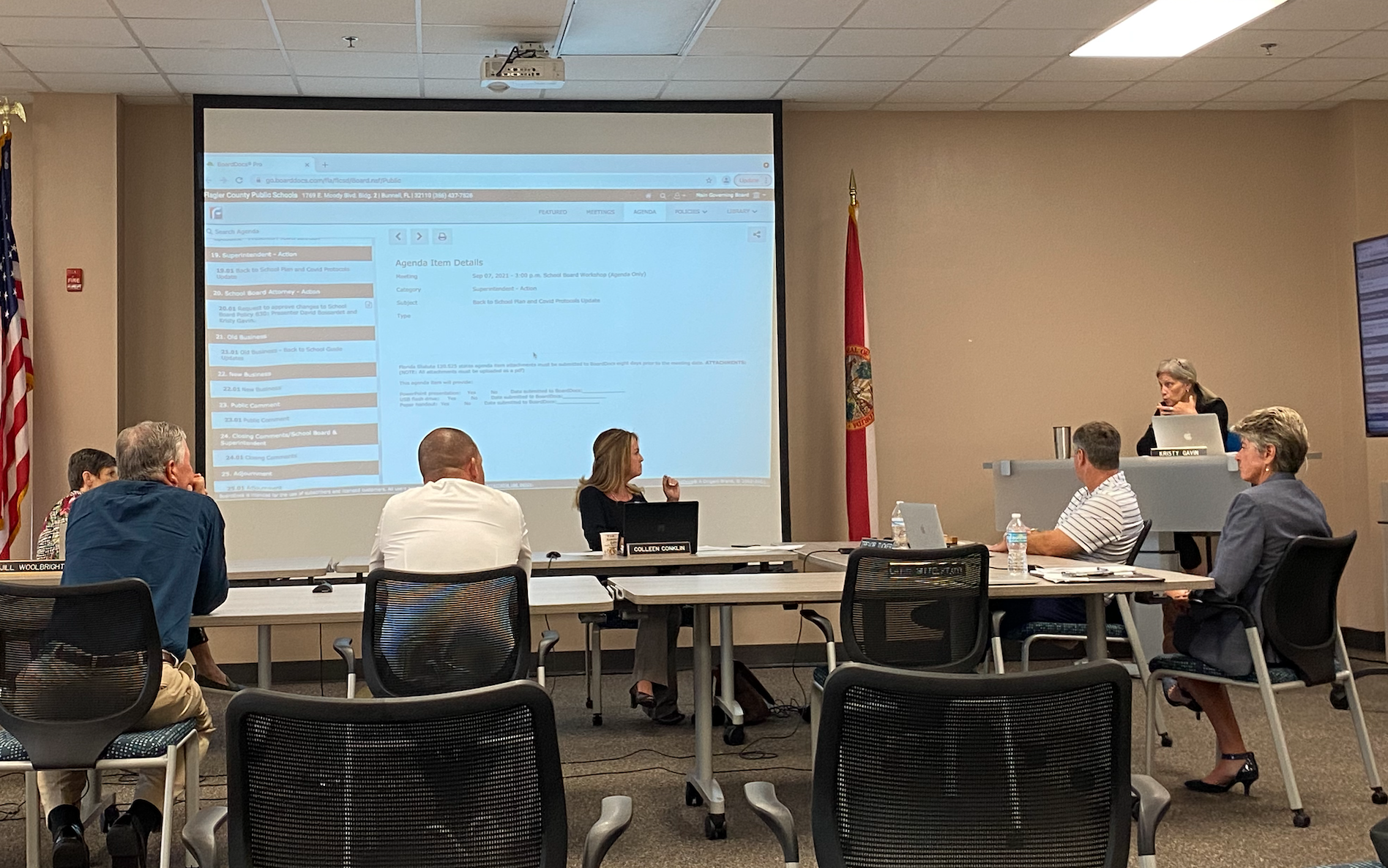 When the Flagler School Board met Tuesday afternoon for its scheduled workshop, nobody was quite sure what to expect. Things had become quite tumultuous at the last meeting on August 17th, particularly surrounding a proposed countywide school mask mandate. To the relief of Board members and county faculty however, there was nothing resembling the shouting and outbursts of that previous meeting on Tuesday. The topic of mask mandates did still come up however, and both the legalities and merits of them were discussed by the Board.

In Tuesday’s discussions, Board member Jill Woolbright accounted for much of the conversation with the presenters (Flagler Department of Health official Stephen Bickel, and David Bossardet, risk management and safety specialist for Flagler Schools) on potential mitigation measures for the present school year. Woolbright stressed that until Governor Ron DeSantis’s ban on mask mandates was officially overturned at the legal level, that instituting a mask mandate was off the table. 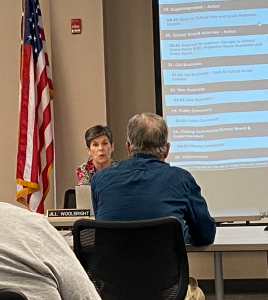 Jill Woolbright discusses with the presenter the legality of instituting a mask mandate. ⓒ AskFlagler

Later on, Board member Janet McDonald had a contested back-and-forth debate with the presenters. McDonald made several assertions that were quickly refuted by Bickel as untrue. McDonald, who has long been outwardly opposed to the COVID-19 vaccines and to any form of mask mandate, suggested Tuesday that PCR tests are ineffective, and that the CDC had declared masks to be 1% effective. Bickel responded to her, “That’s not even close to true.”

Bickel went on to express exasperation with his conversation with McDonald: “You’re entitled to your point of view…..but in certain things like, ‘do the vaccines work?’, ‘do the tests work?’, this is so far…you are such an outlier point of view, it’s hard to respond.”

McDonald also uses her personal Twitter as a source of expressing her opposition to vaccines and masks, helping lead to her becoming a highly controversial figure in local government. “The jab kills and maims!!” was one such recent statement made on McDonald’s Twitter (@USA1Mom). Her stances on COVID-19 and LGBTQ+ issues resulted in a petition being made last year calling on her resignation.

Both stances on the efficacy of masks were represented on the School Board Tuesday; McDonald expressed her skepticism with them, while Colleen Conklin was steadfast in her support of CDC recommendations. It’s hard to argue, Conklin stated, that masks are not helping mitigate the spread of the virus. 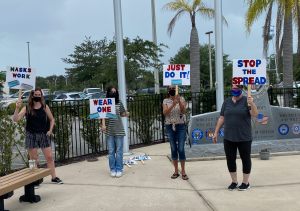 A few pro-mask demonstrators gathered outside the Government Services Building prior to the meeting. ⓒ AskFlagler

Following a lengthy conversation between McDonald and Bickel, Chairman Trevor Tucker pivoted the conversation to the legalities of a mask mandate, calling on the insight of attorney Kristy Gavin. The Board then received a summary of the status of Governor DeSantis’s mandate ban. In short, she informed the Board that DeSantis’s ban was thrown out, but was on an automatic stay while the case was being reviewed. Woolbright asked if a timetable was apparent for these proceedings, and Gavin responded that she didn’t know.

Also brought up in discussion surrounding a mask mandate: the only thing explicitly banned by Governor DeSantis is a mandate without parent opt-out. School districts have the option to impose a mandate with the opt-out and not incur the opposition of the Governor’s office. Colleen Conklin attempted to pass such a motion at the August 17th meeting, along with two other versions of a mandate. None passed then, but it’s not impossible that the Board revisits the idea as the legal status of DeSantis’s ban continues to evolve.

UPDATE 12:46: A new court ruling has thrown out the automatic stay on DeSantis’s mandate ban, allowing schools to legally institute mask mandates in the time until his appeal is heard.