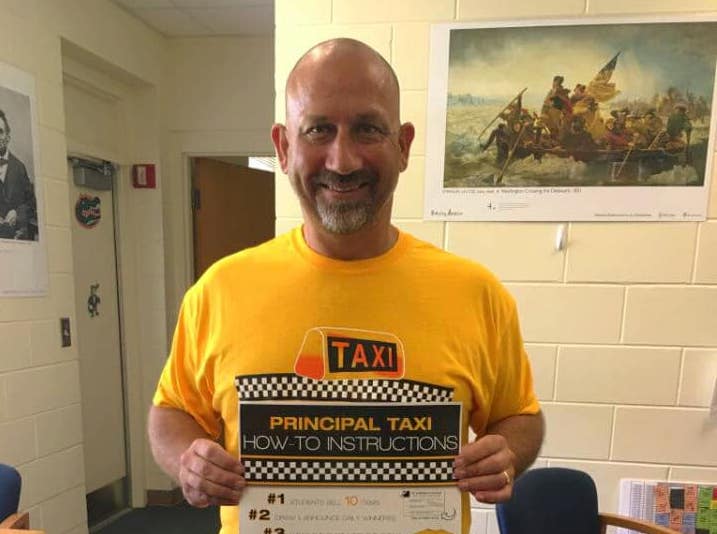 After months of speculation and careful consideration by the school district, Greg Schwartz has been appointed the new principal of Flagler Palm Coast High School. The announcement is made a little over four months after the tragic news that FPC’s previous principal, James T. Russell, had passed away.

In addition to vetting by Superintendent Cathy Mittelstadt, Schwartz was interviewed by a group of FPCHS employees, students, and parents. In her announcement revealing the choice, Mittelstadt talked about a particularly thorough selection process, culminating in Schwartz becoming the district’s choice.

Prior to accepting the FPC principal job, Schwartz has worked in public schools for the last 25 years. His career began at Seabreeze High School in Daytona Beach, where he was a teacher from 1996 to 2012. Schwartz also served as head coach of Seabreeze’s wrestling team and defensive coordinator of its varsity football team. 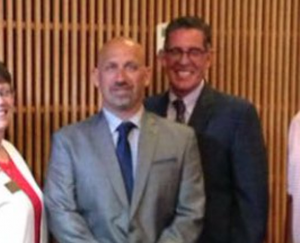 Schwartz (left) stands with his predecessor Tom Russell in a photo posted to his Twitter feed.

In July 2017, Schwartz gained his first experience as a principal when he accepted a job at Pathways Elementary School in Ormond Beach, where he still resides. He stayed in that role until June 2020, when he accepted a job as principal of South Daytona Elementary, a position he’d hold until he learned of his new gig here in Flagler County. Prior to working in Volusia County Schools, Schwartz obtained a bachelor’s degree in physical education from Hanover College, and a master’s degree in educational leadership from Nova Southeastern University.

Out of the 38 applicants for the newly opened principal position, Schwartz made the shortlist alongside a former Flagler Schools principal in John Fanelli and the active head of professional standards, Robert Oulette. Among those who endorsed Schwartz’s qualification for the job was Dusty Sims, who’d preceded the late Tom Russell at FPC from 2015 to 2018. Since 2018 Sims has worked for the state of Florida overseeing the improvement of schools in northeast Florida, but it’s easy to imagine how Sims’ words still carried weight for those in charge of appointing Sims’ second successor.

Supplementing Greg Schwartz’s years of experience in teaching and administration is his experience from having his own kids currently attending FPC. His two sons are both student-athletes on the wrestling team, and one of them also competes as a linebacker for the varsity football team.

“Mr. Schwartz went through an unprecedented process in becoming the principal at FPCHS. The final round of interviews was conducted by a group that included faculty, staff, student, and parent representatives.

“‘I wanted to make sure our major stakeholders at Flagler-Palm Coast High School had a part in determining their next leader,’ says Superintendent Mittelstadt. ‘There are easier and faster ways to do this, but it is important that we fill this vacancy with the right person to move FPCHS forward. Greg is that person.’

“On accepting the job, Greg Schwartz says, ‘I am excited and humbled to join Flagler-Palm Coast High School. It’s a school built on academic excellence, top-tier athletics, extraordinary performing arts, and a multitude of activities and opportunities for our students.’ He’s also got immediate plans ahead. ‘In the upcoming weeks as I transition into my new role, I am eager to meet with faculty, staff, students, and community members. Joining Florida‘s Proudest Campus is a dream come true, GO BULLDOGS!’

“Mr. Schwartz graduated from Hanover College in 1996 with a Bachelor’s degree in Education. In 2013 he earned his Masters in Educational Leadership and Administration from Nova Southeastern University. Mr. Schwartz began his education career as a permanent substitute teacher at Atlantic High School. He was then hired to coach at Seabreeze High School. He’s been a teacher, assistant principal, principal intern, and principal in Volusia County. He’s currently the principal of South Daytona Elementary School. There is a very important connection to FPC though. His sons Grant and Garrick attend Flagler-Palm Coast High School, where they both wrestle. Garrick also plays football for the Bulldogs, so Greg has flipped his share of burgers in the concession stand. Greg and his wife Jennifer also have a daughter, Anna Theresa, an up-and-coming gymnast.”

Earlier in April marked four months since then-principal James “Tom” Russell passed away following a bout with COVID-19. The Flagler Schools community expressed an outpouring of admiration for their late friend and colleague, holding celebrations of his life and legacy both at Flagler Palm Coast High School and in Daytona Beach, where only a minor league baseball stadium was sufficient to host the multitudes of Russell’s loved ones. The shoes left by Tom Russell are sure to be hard to fill, but there’s confidence across the board at FPCHS that Greg Schwartz is the man for the job.

I am excited for the opportunity to join the @FPCHS family! https://t.co/urrfk7Oyn1