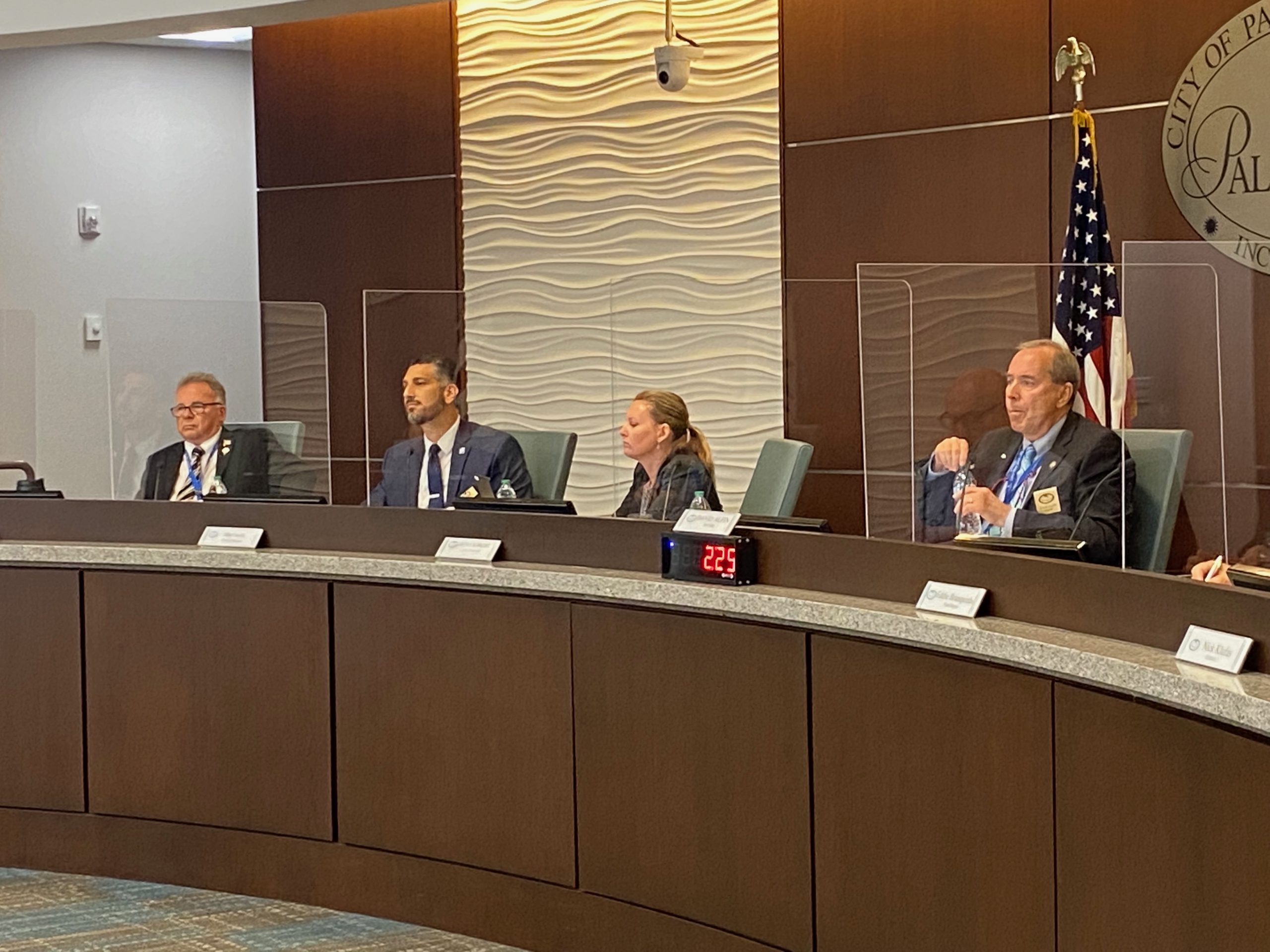 PALM COAST – It was a robust turnout Tuesday morning for the Palm Coast City Council’s bimonthly business meeting. The issue of the day: a final vote on whether to increase Council salaries substantially from what they’ve been for over a decade.

The meeting opened as usual: the Pledge of Allegiance and reading of public comment rules. Mayor David Alfin explicitly requested all comments pertain to an item not on the agenda (saving time for agenda comments until their designated time).

Regular speaker Robert MacDonald petitioned the Council to close loopholes used by certain individuals to pass through City Hall’s metal detectors, speculating that a disgruntled employee or “disgruntled Council member” may enter the public chambers with a weapon.

Two other items were approved, each unanimously: a resolution approving a work order with an engineering firm pertaining to water quality, and an ordinance amending the comprehensive plan. 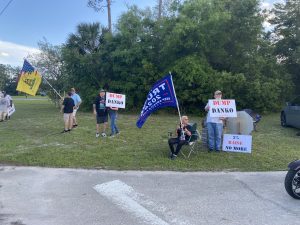 Many who showed up to protest against Danko Monday evening professed to have voted for him in 2020. ⓒ AskFlagler

On Monday night, community organizers gathered at the VFW Post 8696. The building was hosting the evening’s meeting of the Flagler Trump Club, a conservative group which assembles around their admiration for the former President. The Club’s Vice President, Ed Danko, happens to be one of the Palm Coast City Council members who’s expressed enthusiastic support for an ordinance which would give himself and his fellow Council members a 365% pay raise from $9,600 to $44,670.

Councilman Danko saw the dozen or so protestors roadside when he arrived at the Trump Club meeting. He declined to give comment on the gathering. Mike Martin, the organizer who’s leading a petition to have Council raises approved via referendum, did offer remarks about the gathering: “The idea is kind of, ‘get in your face’ to the Council members to let them know that there are really a lot of upset people out here,” Martin said. “Danko is the most stubborn about this, he hasn’t even talked about trying to lower his demands or compromise. Certainly you can’t tell me Danko spends 40 hours a week working on city business.”

Of course, Danko isn’t the only City Councilman who’s shown support for this raise. The idea was proposed by Mayor Alfin originally, and backed by Councilmen Danko and Nick Klufas. Interim Councilman John Fanelli didn’t weigh in at first, but was a Yes vote when the ordinance had its first official vote. Councilman Eddie Branquinho has consistently been the lone voice on the Council against the raise, having suggested a much more modest raise as an alternative.

The people of Palm Coast have also made their voices clear on the issue. As with any contentious matter, residents can be found with both opinions, as well as ones that fall in the middle. That being said, residents who chose to make their voices known have seemed to skew against the raise. An AskFlagler reader poll had 4.03% of respondents agreeing with the raise, and 95.97% standing against it. Hundreds voted, but the poll was not conducted scientifically and so shouldn’t be taken as a definitive look at residents’ opinion on the matter. 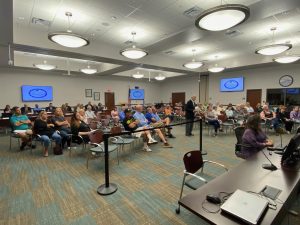 A solid crowd came out to argue against the Council raise. ⓒ AskFlagler

The issue of the raise came up in the business meeting at 10:43, over an hour and a half after the meeting began. Attendance had gotten lower by this point in the morning, though some had attended for other agenda items. “It’s no secret that I’m completely against this raise,” Branquinho said to open up discussion. He mentioned the City Council’s low approval rating as cause to forego a raise. He refrained from making a motion, but asked for a raise to $15,000 at maximum. “I think that we should listen to the people of Palm Coast. And from what I’ve heard, people are not in favor of this.”

Councilman Klufas framed the issue from a standpoint of diversity. He endorsed the rationale that the raise would attract higher quality candidates, saying that with a similar type of person would lead to the Council becoming homogenized in members’ backgrounds. Councilman Danko deferred his own comment in favor of endorsing Klufas’ statement.

Councilman Fanelli relayed public feedback that residents had agreed the hours were full-time in nature. He then made a motion to amend the ordinance, putting the raise at $24,097.61 for Council and $30,039.47 for the Mayor (an average salary compared to cities with similar populations), to tie Council salaries in with those of city staff for cost of living instead of the process of evaluating their own pay separately, and to make Council members eligible for benefits equal to those of city staff (paid in cash if the Council member didn’t take them). It was the greatest impact on Council business that Fanelli had made since being appointed to the interim seat on March 22nd.

Councilman Klufas seconded Fanelli’s motion. Councilman Branquinho questioned Fanelli’s research, confirming that the cities which were looked at had been of similar government formats. He then reiterated that amendments ought to, in his view, come in accordance with public opinion.

Mayor Alfin made one final plea before public comments: “Do we restrict our candidates from running for office and serving the community because we are tying it to their financial wealth and ability to serve without an adequate compensation?” Then, the people took to the podium.

The first commenter put forth that her disability benefits would preclude her from being able to run under the compensation structure laid forth. “You all knew your compensation when you ran for this office,” she said. She then went after the Council members’ workload, laying out the hours spent on Council meetings and events. She received applause at her conclusion.

Robert MacDonald returned to the podium next, speaking of his time working for the U.S. Postal Service. He criticized the Council, voice raised, for not clarifying how much their benefits would cost. Alluding to Klufas, he reiterated the point of Council members knowing the salaries when they ran. Alluding to Danko, he brought up the Councilman’s promise to never raise taxes when he campaigned. He commended Branquinho for his opposition. Turning to Alfin, he was succinct: “This ain’t gonna work, pal.”

Mike Martin was next. His point was that with continuous filled seats since Palm Coast’s incorporation, the salary is enough to attract adequate candidates. He cited the city’s Strong Manager – Weak Mayor form as proof that the work isn’t meant to be full-time. “If this is about attracting better candidates, make yourselves ineligible for this raise,” he said, accusing them of greed. It drew an applause which was louder yet. 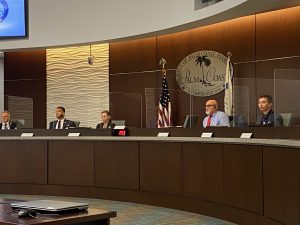 The City Council dais was briefly without its Mayor during public comments on the Council raise issue. ⓒ AskFlagler

Alan Peterson, a former Flagler County Commissioner, urged the Council to reconsider the raise amount. He also implored the Council to change the meeting times to the evening as a potential way to attract better candidates instead of a pay raise. The next speaker argued that the City Council is a full-time job, but still assured the Council that approving a raise would lead to them not being re-elected or even a potential recall effort. Following him was a speaker who curtly told the Council: “you’re fired”. He told the Council to accept what city employees receive without benefits.

“Are you out of your minds?” asked the next speaker, who took Alfin and Fanelli to task specifically, before calling for the entire Council’s removal. Patrick Miller, the former City Manager of Williston, Florida, told Alfin that the timing was awful. Thirteen more residents came up to speak next, bringing the total to 21. They were uniform in their message. At one point Mayor Alfin walked to the back for a few minutes, briefly ceding moderation to the City Attorney. He missed most of the comments of one of the members of the public.

Councilman Klufas expressed openness to revisiting the idea of benefits, something the public urged against. He praised Fanelli’s research on other cities’ Council compensation. Branquinho asked Fanelli to withdraw his motion so he himself could make one to put the raise within a $12,000 – $15,000 window. He recalled the late Mayor Jon Netts, who designed City Hall for the Mayor and Council to have the smallest offices in the building, calling it a hint on the prioritization of employees within the city government. “You, the people of Palm Coast, should be the arbitrator,” he said, arguing that a raise should go on the ballot in line with Martin’s petition.

The City Attorney gave the Council a history of Council compensation since the city’s incorporation. The procedure for the Council to set their own salaries had been written into the City Charter since the beginning, she described.

Councilman Danko remarked that he considered requesting that Fanelli amend his motion to exclude an optional cash payment in lieu of benefits, but that at a $750 figure he wouldn’t be doing so. Fanelli expressed that he himself would not stand to see the fruits of a raise, as he himself is in an interim term and doesn’t plan on running in November. “This is not a money grab,” he said, reaffirming his stance.

Mayor Alfin called the vote. It passed 4-1, just like the ordinance’s first reading. Branquinho was the lone No vote. The Council moved forward with the rest of the agenda and the majority of attendees left in frustration.