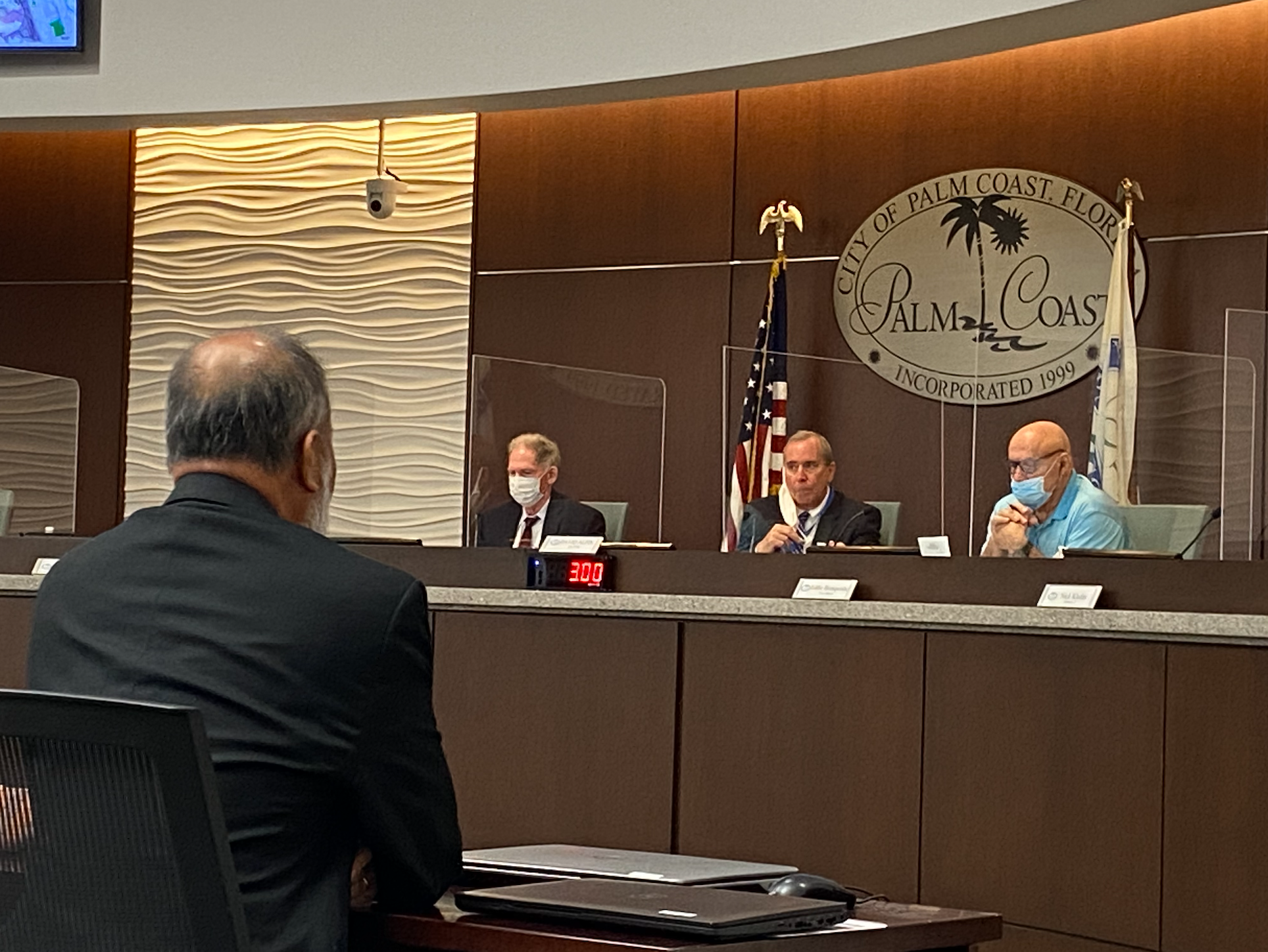 Tuesday morning’s City Council workshop meeting began as usual: the call to order, Pledge of Allegiance, and roll call. Following that was the regular allotted section for public participation. Attendance was relatively sparse compared to the previous week’s meeting, in which Palm Coast’s City Hall was filled to the brim. Most of the meeting’s attendees donned masks, but doing so was not mandatory. Councilman Victor Barbosa was back on the dais, returning from a scary bout with COVID-19 and pneumonia for which he’d been treated at the Mayo Clinic in Jacksonville.

The first speaker was resident of Hidden Lakes off of Old Kings Road. This resident spoke to the changing traffic flow of Old Kings since he’d lived in Palm Coast, and the need for the road to be improved. He suggested that he’d be willing to pay a fair share in taxes to help fund such a project.

Speakers two and three both came up to address problems on Cimmaron Drive. The first recalled being at the podium three months prior, and urged the Council to take expedient action to remedy the traffic issues. He recalled a neighbor who’d moved to the P section to escape Cimmaron, and warned of danger to motorists, pedestrians, and cyclists should inaction continue. The city government recently held a meeting at the Palm Coast Community Center to engage with residents on their plan to act on their concerns. 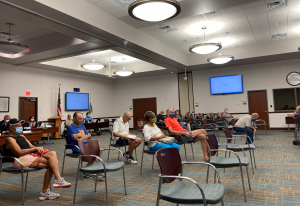 By Item 3 on the agenda, there thirteen residents in the crowd observing Tuesday’s workshop meeting. ⓒ AskFlagler

The fourth and final speaker in public comments came representing Palm Coast’s tennis and pickleball community. He referenced Item 4 on the Council’s agenda for the morning, which be a presentation on parks and recreation master plan and implementation. The man expressed emphatic support for an upcoming expansion of the city’s tennis and racquet sport complexes, predicting it would be a valuable expansion of the local economy.

The first presentation of the morning brought in a special Zoom presenter to speak with the Council ahead of Item 1 – approving the Old Kings Road special assessment roll to be transmitted to the Flagler County tax collector.  Item 2 was a presentation on pavement and roadway assessment. The presenter put Palm Coast’s roadway value at upwards of $800m in total, based on a formula of $1.56m per mile of two-lane road. The city’s roads met a designation of Satisfactory in assessing their current condition.

Item 3 was among the most anticipated of the morning, covering bicycle-pedestrian facilities in the city. The presentation detailed how Palm Coast developed from a car-centric community into one which is known for its bike and walking trails. Planners discussed what future projects are on the radar, and how paths and sidewalks can alleviate safety concerns for cyclists and pedestrians in Palm Coast. Councilman Nick Klufas thanked the city staff for the recent Cimmaron Drive meeting. Mayor David Alfin inquired about the most immediate measure that could be taken to improve the situation.

The fourth item on the morning moved on to parks and recreation. There, a detailed breakdown was presented to the Council on the city’s amenities, including breakdowns of funding, future expansion, and maintenance routines. Mayor Alfin spoke with the presenters about the ties between population and parks acreage, especially relevant as Palm Coast’s residency grows.

Item 5 was a presentation on the proposed budget for the fiscal year of 2022, focusing on internal services, capital, special revenue, and all other remaining funds. The Council was given a summary of types of impact fees, and what types of projects in the city they can be used to fund. Also covered was the allocation of funds from the American Rescue Plan Act, in which $6,250,940 are designated for Palm Coast in the fiscal years of 2021 and 2022, totaling in a little over $12 million in funds for the city overall.

Doug Akins, Director of Information Technology for the City, presented the portion on IT Internal Services. His department made the requests for funding increases to stay up to date with anticipated needs for the 2022 fiscal year. 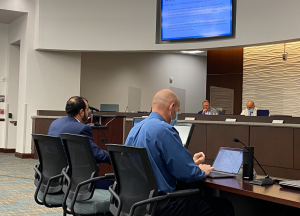 DeLorenzo stayed at the presenting table to cover Item 7, an ordinance which focused on the regulation of collection bins within city limits. As this concluded around noon and three hours in, Mayor Alfin floated the idea of taking a brief break. After brief discussion with Councilman Branquinho, the decision was made to power through.

Item 8 came up next, with DeLorenzo now presenting on screening requirements for garbage containers. The change of wording proposed would require trash containers to be screened from view when not set out for pickup. The idea of a break was again floated, as delivery food had apparently arrived at City Hall. The Council again elected to keep going. 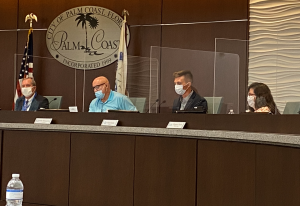 Next up to present was Lauren Johnston, Palm Coast Chief of Staff. She introduced Item 9, amending the parks and recreation fee structure. After warning the Council that it would be lengthy, Alfin at last decided on a 15 minute recess beforehand.

When the break concluded, this presentation opened by discussion the Community Center, and some of the public feedback that’s been received about it. It was stated to the Council that the Center currently loses money on renting its spaces, due to the prices being too low. The Community Center was compared to similar centers in town in order to strategize on boosting revenue to help pay for its upkeep and usage.

A section on tennis and racquet sports was included, explaining the role this particular sport plays in the larger recreation economy in Palm Coast. The presenters stated that once the expended facilities are constructed, different membership fees may see increases, and such plans will be presented to the City Council when the issue is pertinent.

Next up after tennis were the topics of aquatics and golf, explaining their place within the city and what facility maintenance and provided revenue look like from each source. The city’s golf facilities received high praise from Branquinho, who expressed support for a proposed $2 fee for golf cart usage to offset replacement costs. Carts are currently set on a three-year replacement schedule.

Different Holland Park aspects were discussed, including pavilion rental and the recently opened splash pad. Last up for Parks & Recreation was sports facilities, in which usage fees were broken down and shown to the Council. Thus concluded the Item 9 presentation.

The penultimate resolution item, Item 10, was approving the continuation of the health insurance with Florida Blue and to include stop loss and life and disability insurance. With a few questions by the Council, this item went fairly quickly.

The last item on the agenda was Item 11, approving the final nuisance abatement assessment. Not much discussion occurred, and the final item was concluded.

In the tail end public comments section of the meeting, Jarrod Maxwell came up to speak as President of Mad Dogs Flag Football. Maxwell related some unsafe experiences he’d seen local athletes have on local fields, such as Wadsworth Park and Ralph Carter Park. As his time expired, Maxwell also made a brief point of noise restrictions being oppressive to the quality of product his league offers. 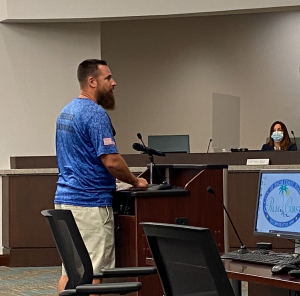 Following Maxwell was Michael Caine, President of Florida Elite Soccer Academy. Caine pleaded his own case with the Council, citing the need for field space to host larger soccer tournaments. Like Maxwell, Caine argued the benefit to the community from being able to host large athletic events in Palm Coast.

Immediately as Mail wrapped up, Councilman Branquinho pledge $500 to go toward scholarships awarded by Florida Elite Soccer Academy, in the name of his own late son. There were no further public comments.

In his closing comments, Branquinho spoke about the dangers of COVID-19, and how hard it’s hit the City Council. He remembered the late Mayor Jon Netts, who’d passed away after a bout with the virus. He encouraged residents to practice personal caution. Councilman Victor Barbosa expressed frustration with residents who lived near Holland Park that’d been complaining about kids at play, and thanked the community for their support as he battled COVID-19 and pneumonia. Barbosa related his experience at the Mayo Clinic, and encouraged residents to go and get a Covid vaccine.

Councilman Danko floated the idea of live-streaming workshop meetings the same way the city does for regular meetings, an idea which Alfin was receptive to. He also inquired about approving new work vehicle signage. Alfin’s final comments thanked city staff for the detailed presentations of the day.

Interim City Manager Denise Bevan took her slot to address Danko’s question about the vehicle signage, and to give support to Barbosa in his recovery. The workshop meeting then adjourned, over four hours after its onset.