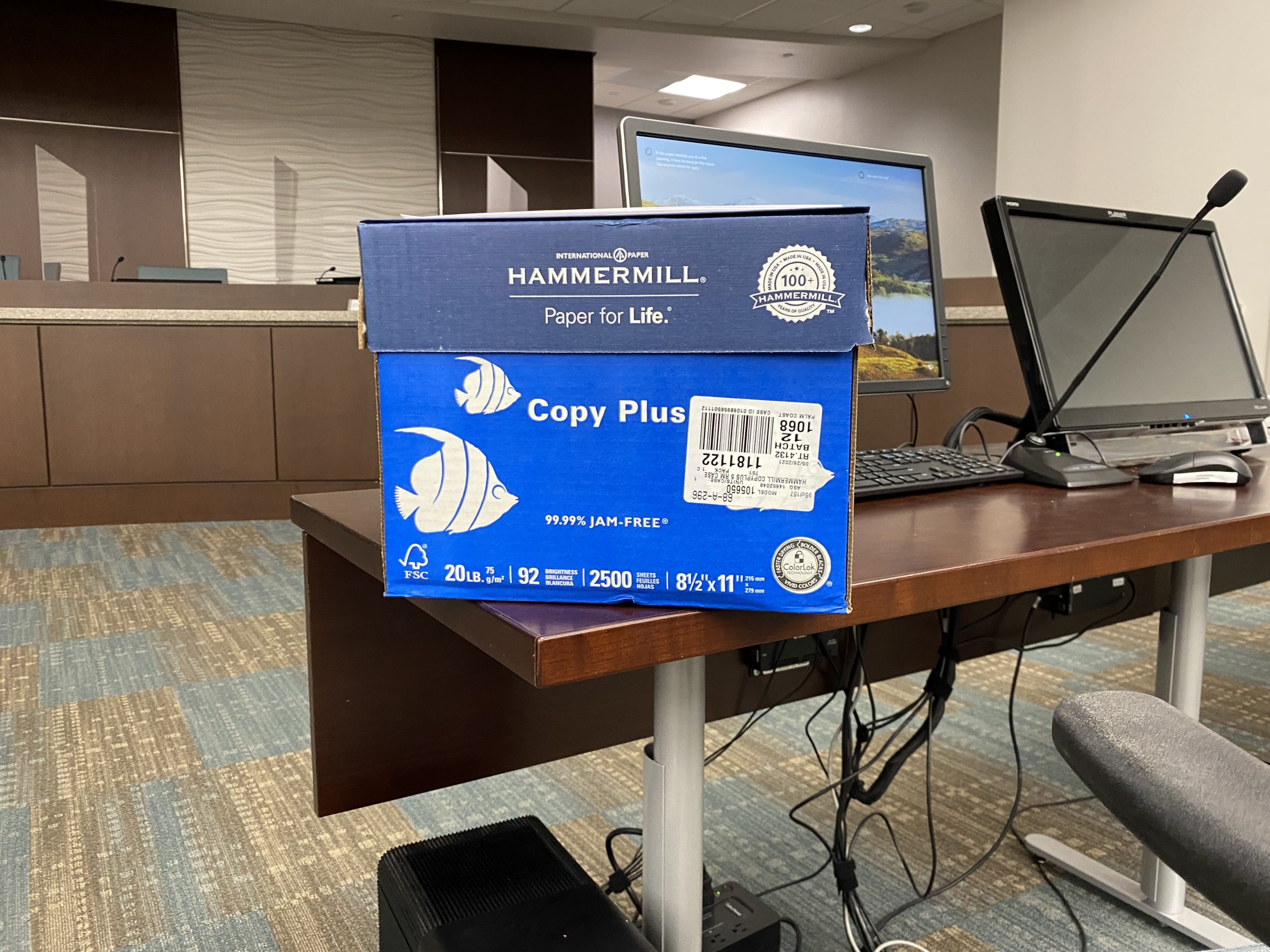 The box of legal documents handed to the City of Palm Coast by Robert M. Young. ⓒ AskFlagler
ADVERTISEMENT

A lawsuit was filed Tuesday against the City of Palm Coast and others by members of a now-notorious ‘Naughty List’, kept by the city to document citizens they’d deemed difficult or dangerous to deal with. The list had existed unknown to the public or to those listed until it was published on May 25th by the Daytona Beach News-Journal.

Who are the Defendants?

The City of Palm Coast is legally represented by Garganese Weiss D’Agresta & Salzman, PA under contract. Its primary City Attorney is William E. Reischmann Jr, a 1983 graduate of the University of Florida Frederic G. Levin College of Law.

Barbara Grossman is the Code Enforcement Manager for the City of Palm Coast.

Nick Klufas the District 3 council member for the City of Palm Coast, elected in 2016 and re-elected in 2020.

Milissa Holland is the former Mayor of Palm Coast, elected in 2016 and re-elected in 2020. She resigned just months into her second term in May 2021, citing a need to be attentive to her daughter’s medical crises. She is succeeded by interim Mayor Eddie Branquinho, and a special election to find a permanent replacement is set for July 27th.

Matthew Morton is the former City Manager of Palm Coast, first appointed in April 2019 and resigning in May 2021. Morton was succeeded by interim City Manager Denise Bevan.

Michael Hadden is a Code Enforcement Officer with the City of Palm Coast.

Luis Mendez is the Code Enforcement Supervisor with the City of Palm Coast.

Bryan Shelley is a Code Enforcement Officer with the City of Palm Coast.

Eddie Branquinho is the District 4 council member for the City of Palm Coast, elected in 2018. He currently serves as interim Mayor of Palm Coast following Milissa Holland’s resignation in May. He will return to being a council member only when the new Mayor is elected on July 27th and certified on July 30th.

When asked for initial reactions, Reischmann, Klufas, and Councilman Ed Danko had no comment. Councilman Victor Barbosa commented: “He’s entitled to his stuff, and we gotta have [Reischmann] look at it and see what’s going on. Hopefully, he’ll get back to us and fill us in with more information.”

Robert M. Young, one of the plaintiffs on the case, spoke at Tuesday’s City Council meeting where he disputed characterizations of himself by acting Mayor Branquinho at the last meeting (Branquinho described Young as having made threats of ‘blood in the streets among other things) and announced to the Council that he’d filed a case against the city in district court. Young gave the following statement to AskFlagler after handing the City of Palm Coast legal documents:

“A whistleblower under the federal statutes is for the employee that worked for a government agency.  Under the federal statutes, it’s also an employee who works for a government agency. No whistleblower in the city of Palm Coast works for anybody, they’re not paid. They’re not employed, they are neighbors, so what they’re doing is they’re empowering a neighbor to control who lives there. To push other people out to harass them, to create strife in the community. This is not a way of creating unity and a neighborhood. God said, love thy neighbor how can we love somebody just constantly harassing you?

“It’s unethical and immoral and to have this list without due process is a violation of everyone that’s on this list. I’m on that list. I was appalled when I found out, but I wasn’t shocked that they put it out.

“Because when I talked to Barbara Grossman on April 21st, I started to hear about the whistleblowers and then she threatened me with criminal prosecution. Then she said that she was going to if I wanted to complain because I have flags for my company that are outside of my retail business and there are flags all over this city and I informed her of over 17 flags from my house to my commercial property that I’m my retail space. I’ll put your name on and basically put an X on your back. And I said, ‘you’re missing the point.’

“The point is whistleblowers aren’t supposed to tell you how to do your job. If you are going to effectively put out these rules and codes which are in violation of the 5th and 14th amendment, then you need to do them uniformly across the board to be constitutional in the 14th amendment. And if you don’t, they are illegal and unenforceable. You can’t tell me I can’t have my flags out there if everyone else has their flags. In essence, they continue to harass my client or my landlord. My landlord asked us to leave because the harassment was getting to him. This harassment started over five years ago, and her personal residence. We have a property that was not part of the city. The city incorporated it. They adopted it and the HOA rules and regulations and codes. The problem with that is that under the Florida Statutes and other government statutes, any HOA has to be an LLC and not a government agency, and government agencies can’t control it. If it looks like a duck, it walks like a duck and it quacks like a duck by God, according to the court, it’s a duck.

“For all intents and purposes, everybody in this community realizes this is an HOA that says city it’s illegal. They didn’t do under due process means that when the city enforces rules and regulations upon city citizens, you’re taking away their free simple rights. When you do that, you must. Pay every citizen for the loss of their freedom. That’s the due process. It’s in my documents.

“What I’m willing to do and what I’m looking for is people who are fed up with not being able to have their own recreational vehicle in their driveway or on their premises or people who have been targeted or people who feel like their neighbors are targeting because I’m not going just after the city in all of these, and let me give you an idea how big this case is, just so you could get an idea: I can prove that the loss of equity on each individual home within Palm Coast has been lowered approximately $50,000. Due process requires them to pay that equity loss, infringing on their rights. There are 36,000 homes roughly. In Palm Coast, that’s over $1.8 billion. That’s just one factor of what I’m trying to do now. The court may not allow me to sue on behalf of people that are not involved in the lawsuit. So I need everybody that’s interested to get in touch with me because I’m hoping that doesn’t happen. I told the city two years ago if they persisted in this illegal activity that I would bankrupt them.

“Every person that has left Palm Coast because of the over regulations. There are people who move here. They get a permit to make an extended parking area for RV’s and recreational vehicles. The city allows them to do this, but then when they parked their recreational vehicle there where they just got a code in order to build it. They start getting harassment. They don’t know about these rules and regulations by law must provide CC and Rs to each and every homeowner that buys in. These people are unaware that they buy into an HOA there for every person that’s left.

“The costs that they had lost in that transaction, their cost for moving and relocating the city owes them that money. That’s another portion. Every if they find that these are unconstitutional rights ’cause they didn’t do a due process, that means.

“Every fine that they received since the inception of these rules and regulations that have to do with things that are 55 and older and remove your fee rights, they have to pay that money back within so every person that’s ever got a fine, felt like they were harassed, or put on this list for libel and slander that is included in this list and I need them to get in touch with me so we can make our voices heard because enough is enough.”