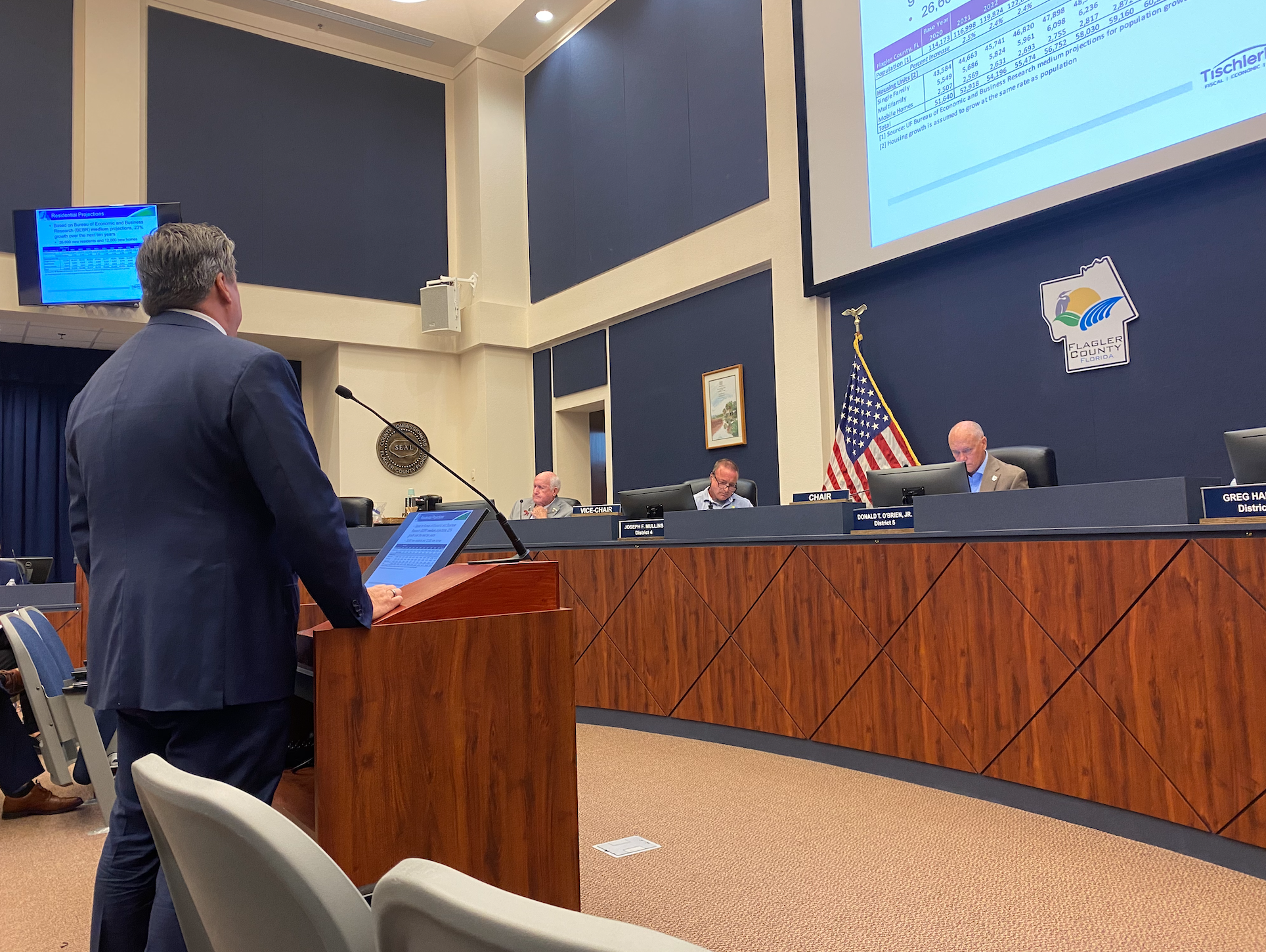 Representatives of the Flagler County School Board attended a County Commission workshop Tuesday to present the Commission with information about the Board’s 2021 impact fee study. The impact fees have remained static since 2004, and the Board requested this workshop earlier this month in order to propose a situation in which the County adopts fees for Flagler’s unincorporated areas. 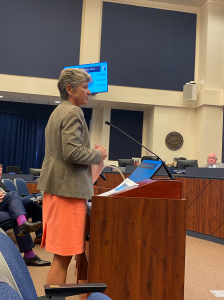 Cathy Mittelstadt presents to the Commission from the podium. ⓒ AskFlagler

Superintendent Cathy Mittelstadt was first up to present to the Commission, in which she filled the five commissioners and the public in on what the fees are and how the study was conducted.

In the words of the slideshow that Mittelstadt read at the meeting: “Impact fees are a one time charge assessed on a new development to help pay or new or expanded public school facilities that will directly address the increased demand created by that development.”

The Board approved an impact fee study in January of this year, and in April awarded it to TischlerBise, a fiscal consulting firm based out of Bethesda, Maryland.

On hand to speak to the firm’s side of things was Carson Bise. In his allotted presentation time, Bise spoke to several statistics, including student housing data and student generation rate.

Relevant to Flagler Schools’ request: the state legislature passed House Bill 337 on April 26th, capping increases in impact fees by local governments to 50% of the existing fee, barring ‘extraordinary circumstances’. This phrase was a defining one of the meeting, as there was considerable debate as to whether such circumstances were present.

Patty Bott, Flagler Schools’ Coordinator of Planning and Intergovernmental Relations, presented the Commission with a case that they were. Bott used statistics from the Bureau of Labor to argue that inflation had rendered the 2004 rates far out-of-date ($3,600, the single-family home impact fee set in Nov 2004, equates to $5,156.24 in August 2021 money). 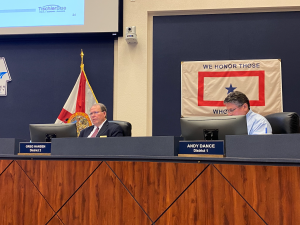 In public comments, several representatives of the Flagler Home Builders Association spoke to the Commission advocating against the changes. One such speaker was Annamaria Long, executive officer of the FHBA. Long was incensed with the rationale behind a proposed extraordinary-circumstance increase, laying out her assertion in plain terms: “There is no extraordinary circumstance here.”

Also speaking was Michael Chiumento III, who provides legal representation to many landowners and developers in Flagler County. Chiumento implored the Commission to look at a fee increase with a more measured approach. “Maybe we should slow this down, take another look,” the attorney said. He suggested looking at a smaller increase as a better option.

The County Commission will make a final decision on Flagler Schools’ proposed impact fees on September 20th, at 10:00 am. The Flagler School Board already approved the increase on their end by a 5-0 vote.