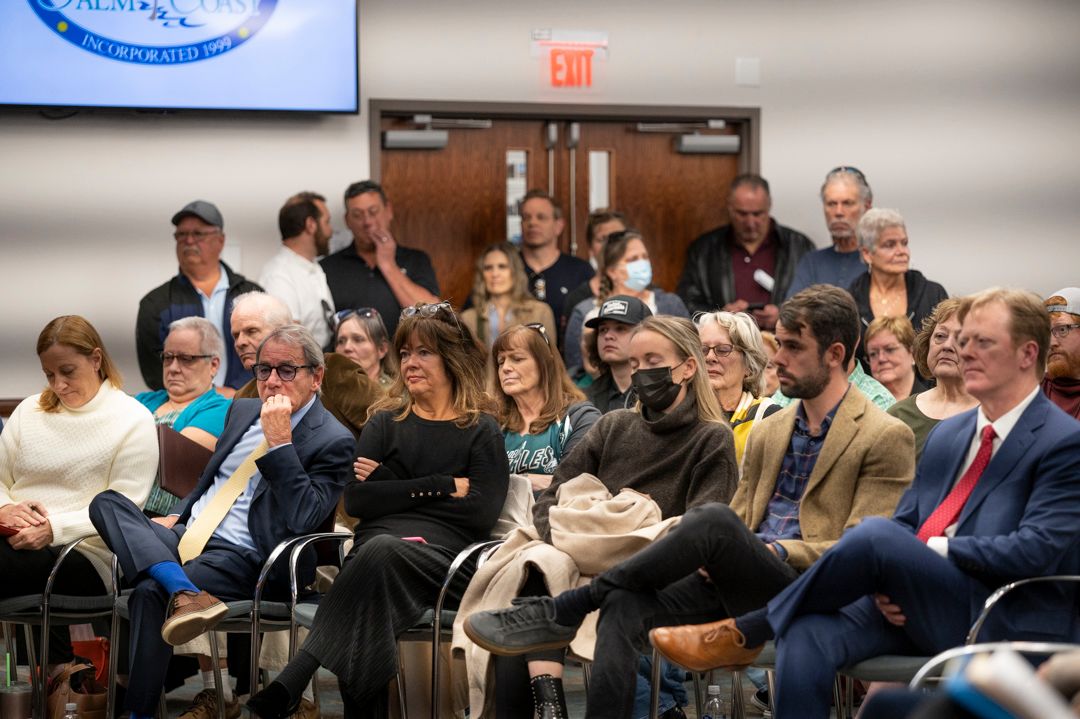 Dozens of residents came to show their support for the Marlow family and the Green Lion Café. ⓒ Stephen Helfrich
ADVERTISEMENT

PALM COAST – The Palm Coast City Council backed down from a decision made last week to put the Green Lion Café’s building space up for auction, terminating the long-running lease agreement they’ve had which revitalized the Palm Harbor Golf Course. The decision came after around two hours of a public comment session in which nearly every speaker urged them to do so. 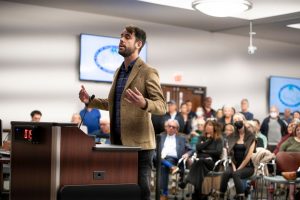 The Green Lion Café, established in 2017, set up shop at the Palm Harbor Golf Course in an effort to give it new life. The space, which is shared in a double-wide with the clubhouse, was less than savory for prospective restaurant owners. The owners of the Golden Lion Café in Flagler Beach were lonely in their bid to move in, and many didn’t have generous predictions for how the project would fare. Against the odds, the Green Lion prevailed.

In addition to the inherent challenges of opening a restaurant at a strained golf course, the Green Lion had to deal with two months of closure due to the pandemic and with month-long repairs to its floors, which the owners say were at one point caving in.

Of the Council who cut the initial deal to bring in the Green Lion, only Nick Klufas still serves. The other four Councilmen were less familiar with the transaction, and had to be brought up to speed on it as the issue came to rise. Their decision asserted that only $600 a month in rent was a bad business deal both for the City and its taxpayers. The rent was scheduled to increase to $1,200 in September, and then up to $2,500 in five years on a set of staggered increases. 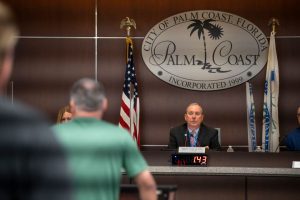 Before the public comment section of the meeting commenced on Tuesday, Councilman Victor Barbos tried to intervene. He attempted to make a motion ordering city staff to re-engage with the Marlow family who owns the restaurant. Mayor David Alfin had him reserve his motion until after public comments had concluded.

What followed were two of the most unified hours in the history of Palm Coast’s community. Nearly every singly speaker at the podium criticized sharply the Council’s treatment of the situation up to that point, and urged them to reassess. Comments began shortly after 9:00 am, and wrapped up around 11:00 am.

Mayor Alfin spoke first to attempt to mediate the relations between the citizens and the Council, certainly at their most strained since he took office last summer. “Good governance starts right here, right now,” he said, thanking the people for their overwhelming turnout. He attempted to garner consensus that the City Council would go back to the negotiation table with the restaurant. 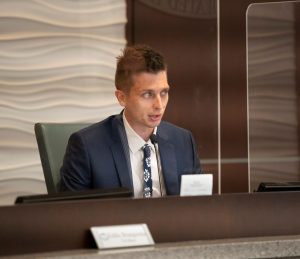 Councilman Nick Klufas, the last member serving who was a part of the 2017 deal, remained an advocate for the Green Lion throughout the process. ⓒ Stephen Helfrich

Eddie Branquinho still had grievances to air on the matter. He asserted that he had no personal gripe against the Marlows, but pleaded that the rates being paid were unacceptable. He listed numbers which would put the Green Lion’s rent per square foot at pennies on the fair market dollar, before Councilman Klufas corrected him that the fair market price he’d cited was a yearly figure, not monthly – bringing the Marlows’ price much closer to a reasonable figure.

Councilmen Ed Danko and Victor Barbosa also heeded the concerns of their citizens for the most part, and Barbosa apologized to the Marlows for having previously rallied against their case.

It’s not a completely done deal at this point in time, but one thing looks absolutely clear: the people of Palm Coast will not let the City Council do away with a beloved community eating establishment. 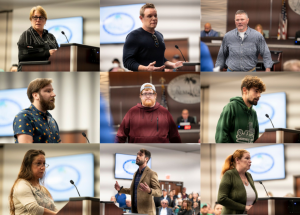 Dozens came to support a restaurant the knew and loved. ⓒ Stephen Helfrich