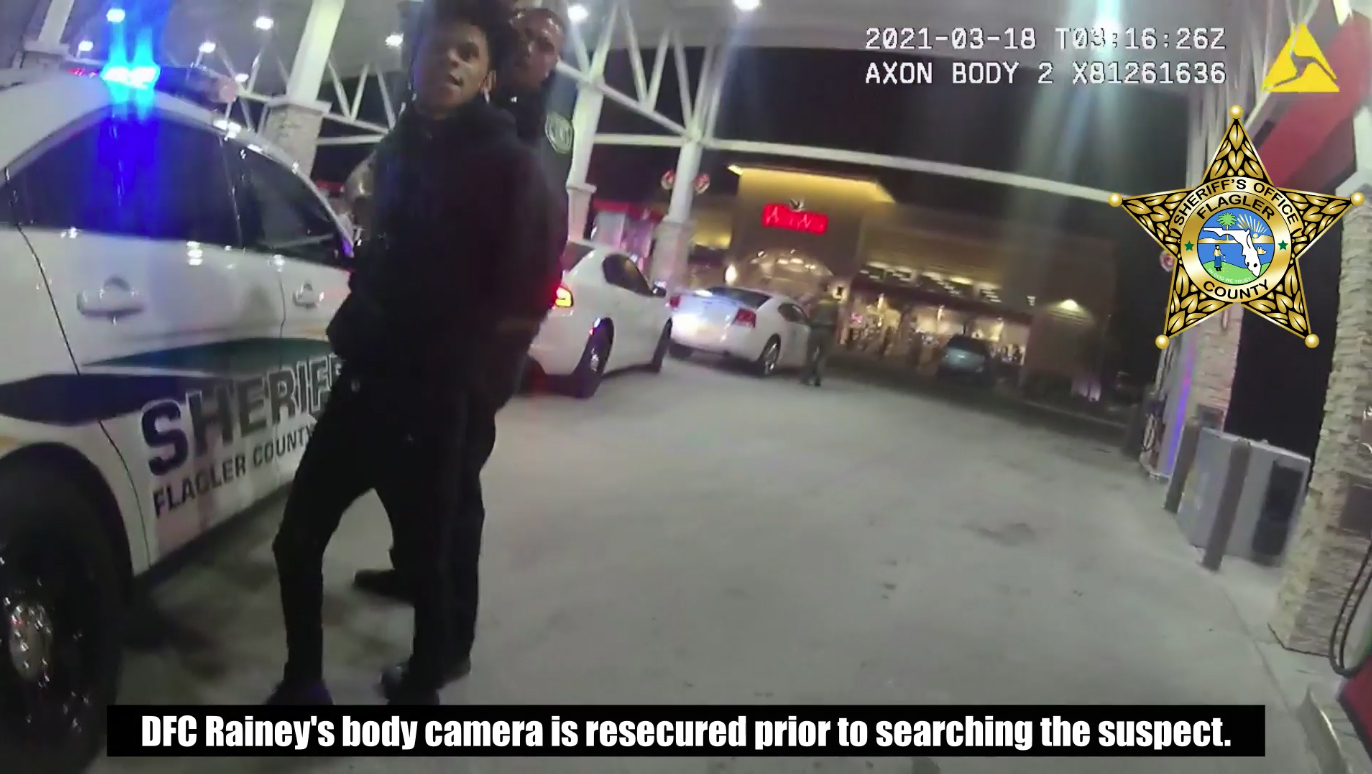 Flagler County Sheriff’s Office (FCSO) Deputy First Class (DFC) Crista Rainey conducted a traffic stop on a white Dodge Charger at the Wawa on SR 100 in Palm Coast on March 17th at 11 pm after witnessing it traveling at 63 mph in a 50 mph zone. A strong odor of cannabis was emitting from the vehicle but both the driver and the passenger, 21-year-old Shaquan Moore (DOB 1/14/2000) denied having any narcotics or medical marijuana prescriptions in the vehicle.

Deputy Aaron Clay and Deputy Aaron Beausoleil arrived as backup and Shaquan was still actively resisting. Several verbal warnings were given to Shaquan to stop resisting or he would be tased. Deputy Beausoleil then administered a total of four drive stuns as Shaquan continued to resist and would not bring one hand away from his waistband. Shaquan was eventually secured in handcuffs. A loaded 9mm handgun was recovered from Shaquan’s waistband.

Shaquan was found to be a fugitive from Fulton County, Georgia with an active warrant for homicide. The warrant was confirmed and Shaquan was medically cleared at Advent Health Palm Coast for minor abrasions from resisting arrest.

Shaquan was transported to the Sheriff Perry Hall Inmate Detention Facility and charged with Resisting Arrest with Violence and Possession of a Concealed Firearm. He was additionally arrested for the Fulton County warrant and held as a Fugitive from Justice. He remains in jail with no bond allowed.

“This goes to show that no traffic stop is ‘routine’ and a simple speeding violation can quickly escalate into a violent encounter with a very dangerous individual,” Sheriff Rick Staly said. “DFC Rainey had no idea that she was pulling over a fugitive wanted for murder. This could have easily turned into a deadly encounter but our deputies reacted quickly, used their training to safely take this suspect into custody, and, thankfully, God was watching over our deputies last night.”

A probable cause search of the vehicle yielded a small amount of Cannabis. The driver was given a verbal warning for speeding and the possession of cannabis. He was subsequently released with his vehicle from the scene.