What began as an interstate chase of a stolen car reaching speeds of 95 mph came to an end this weekend thanks in part to a new K-9 team, Sheriff Rick Staly, deputies from Flagler and Volusia County, VCSO’s AirOne, the Florida Highway Patrol and the latest in high-tech crime fighting technology.

“Whether they work on two or four legs, or in the air, every member of the FCSO and our law enforcement partners play important roles in keeping the people of Flagler County safe and stopping criminals in their tracks — literally in this case.” 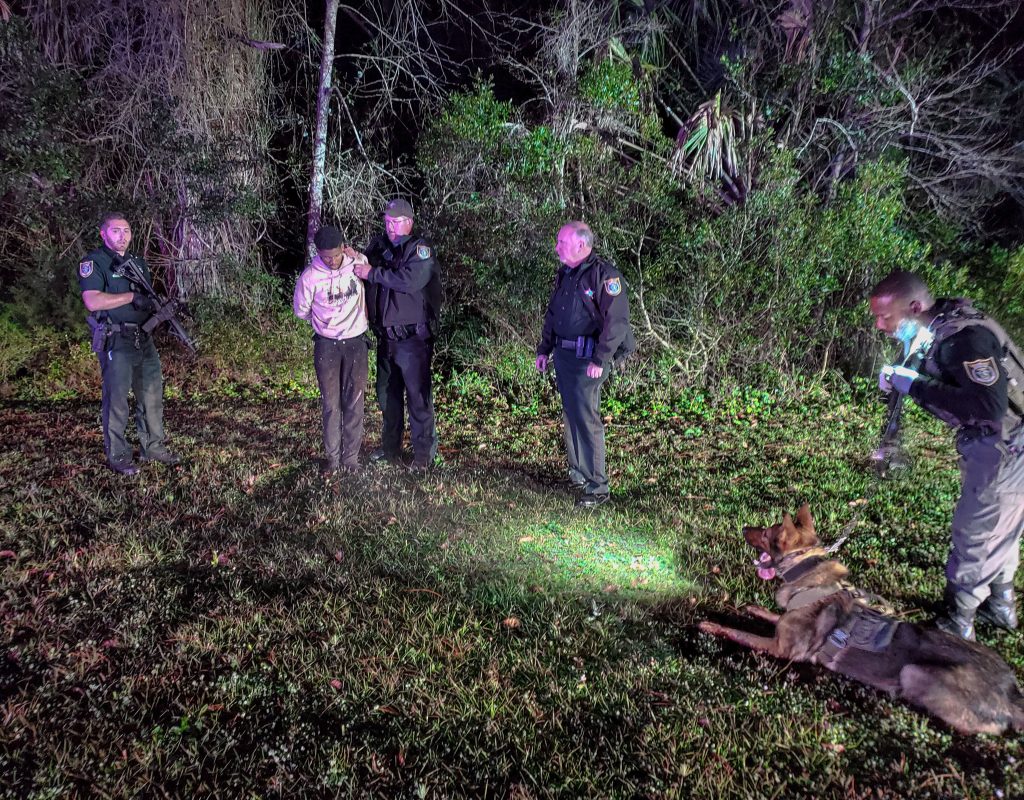 As Flagler deputies converged on the car, the thief saw his plan begin to unravel on Interstate 95 near Old Dixie Highway.

First, the Sheriff’s Communications Center worked with the automobile navigation system On-Star to slow down the stolen vehicle, dropping its speed eventually to 5 mph and turning on its emergency flashers while deputies activated their emergency lights and sirens to stop the stolen vehicle.

The car thief then bailed out of the car and fled across I-95 into a wooded area on the east side of I-95.

Staly and deputies from Flagler, Volusia and the FHP converged and set-up a perimeter.

Flagler’s newest K-9 team, DFC Marcus Dawson and K-9 Baro, began tracking the suspect through a dense wooded area along the interstate. K-9 Baro kept tracking back toward the interstate, and a citizen called in and said he had seen a subject run across the interstate. 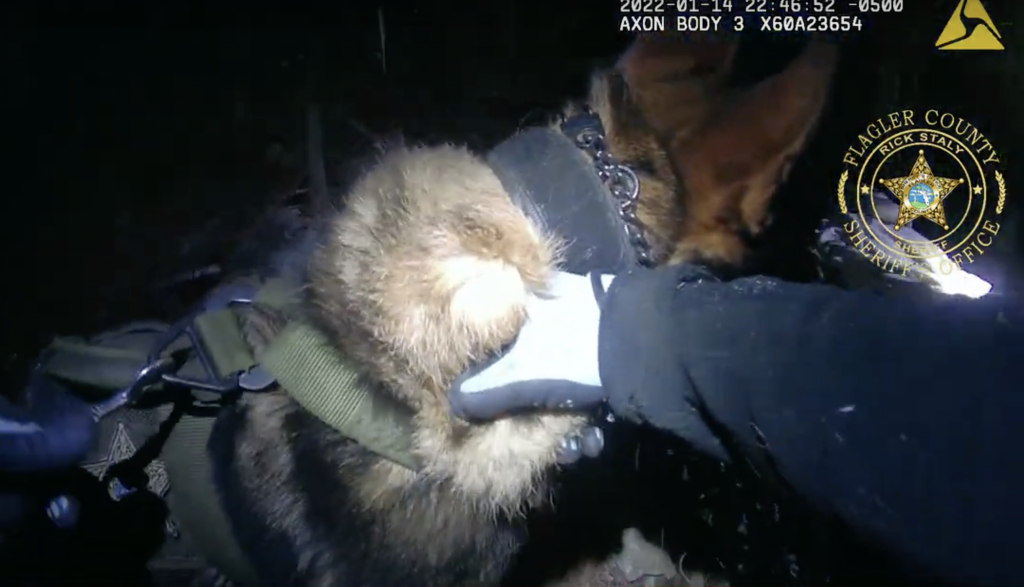 K-9 Baro approaches the suspect, as seen in his handler’s body camera footage.

Staly, who was out on one of his Friday night patrols and was on the perimeter near the abandoned stolen car, decided to take his unmarked patrol car and search for the suspect near an old abandoned hotel and nearby gas station on Old Dixie Highway.

As Staly pulled in to the BP gas station, he spotted the suspect near the hedges of the parking lot.

Staly exited his patrol car, pointed his Glock firearm at the suspect and ordered him to freeze, but the suspect ran into woods near the entrance to the Plantation Bay Golf and Country Club.

Deputies from both agencies and the FHP then responded to assist the sheriff and apprehend the suspect.

The FCSO’s K-9 team began a track just as the Volusia County Sheriff’s Office’s AirOne helicopter arrived and put its night vision technology, FLIR, to use to help lead DFC Dawson and K-9 Baro to the suspect, who was trying to hide in a wooded area next to Old Dixie Highway.

K-9 Baro tracked right to the suspect and apprehended him with a bite when the suspect did not quickly surrender. This ended the car thief’s night of joyriding and running from the law.

The juvenile, identified as a 16-year-old from Belle Isle, was taken into custody and charged with Armed Burglary of a Conveyance, Grand Theft Motor Vehicle, Grand Theft Firearm, Flee to Elude with Lights and Sirens Activated, Possession of a Firearm by a Minor, No Valid Driver’s License and Resist Arrest without Violence.

Deputies transported him to Advent Health-Palm Coast for medical clearance and treatment of his dog bite.

Once cleared by medical he was taken to the Sheriff Perry Hall Inmate Detention Facility for processing and then transferred to the Department of Juvenile Justice.

“This was a great team effort by Nassau, Flagler and Volusia County Sheriff’s Offices, FHP, our Communications Center, On-Star and VCSO’s AirOne technology helped apprehend this car thief,” Staly said. “This thief had actually run right out of his shoes when I found him, with only socks on his feet. Whether they work on two or four legs, or in the air, every member of the FCSO and our law enforcement partners play important roles in keeping the people of Flagler County safe and stopping criminals in their tracks — literally in this case! You can run from us, but you’ll just go to jail tired.”

Baro specializes in criminal apprehension, narcotics and explosives detection. Baro’s handler previously made headlines for his life-saving efforts last October when he saved a three-year-old boy from a house fire in the W-Section of Palm Coast.

“Deputy First Class Dawson and Baro truly live up to the FCSO motto, ‘An honor to serve, a duty to protect,’” added Staly.