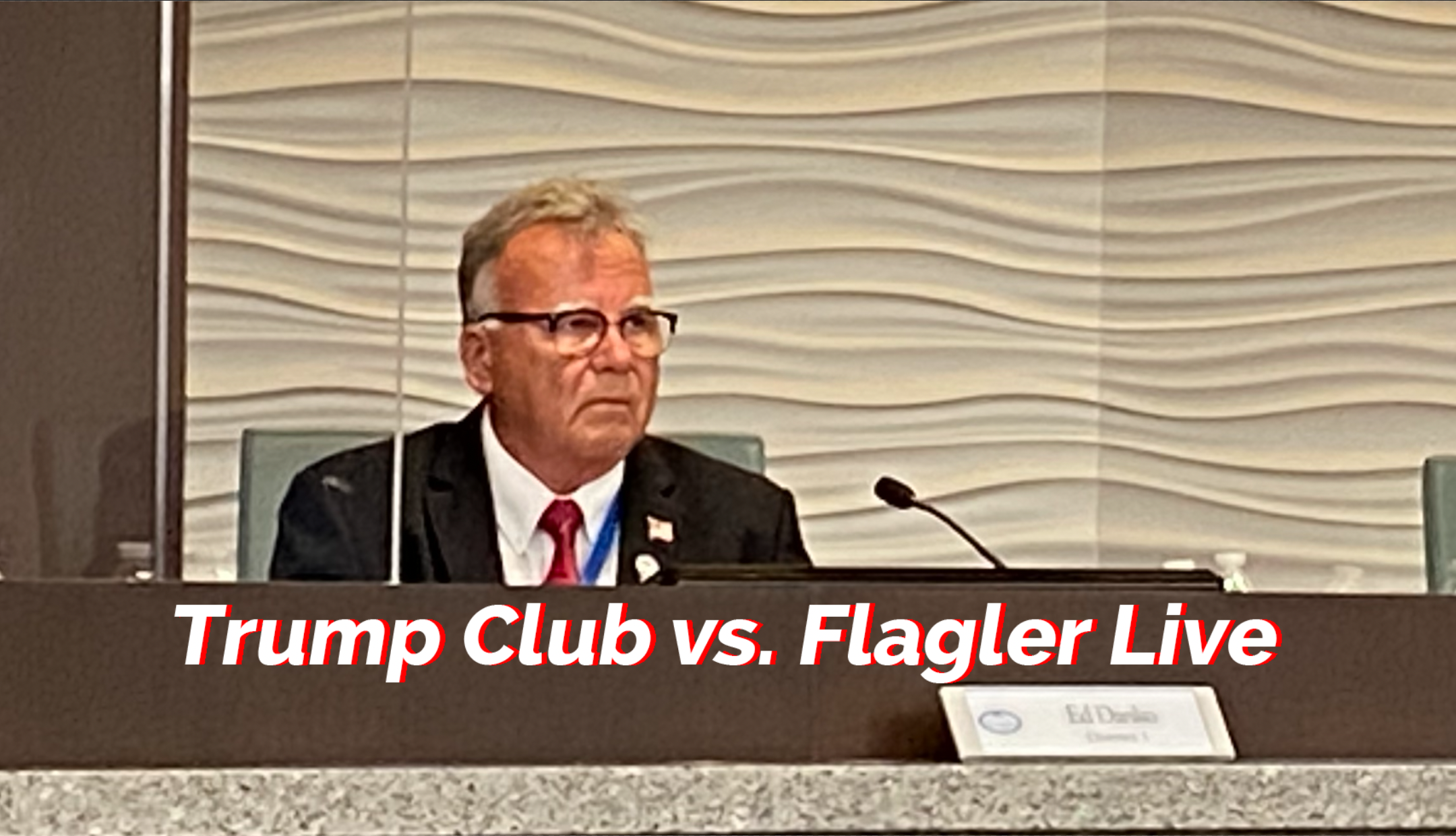 The Flagler Trump Club, a countywide conservative group with members in the hundreds, are encouraging their members to boycott Flagler Live, a news website which the club sees as antithetical to its values. The announcement has sparked controversy within the community, and has placed the 21 businesses listed in the boycott at the center of the debacle.

Palm Coast City Councilman Ed Danko, who’s listed as the Vice President of the Trump Club, has been the de facto figurehead of the movement against Flagler Live; him being the only elected official on the Board of Directors has made him arguably the club’s most recognizable face. Those expressing opposition to the boycott have often named Danko as the driving force behind it. At an October 5th City Council meeting, Danko was indirectly confronted by the owner of one of the businesses during the public comments portion.

Scott Spradley is a Flagler Beach-based attorney whose law firm, Scott Spradley Law, was on the boycott list. He took to the podium in public comments to express his dissatisfaction with the fact that a boycott of his business was being called for by a City Councilman. Danko interrupted Spradley the moment his own name was mentioned. Turning to Mayor David Alfin (the mediator of the meetings) Danko asked, “is the Flagler Trump Club and its agenda on our City Council agenda?” Alfin asked Danko to save any response to Spradley’s comments until after public comments concluded, as is consistent with decorum. At first, Danko complied.

Spradley continued: “Two weeks ago today, Mr. Danko began a social media-“. Danko again cut in, turning to Alfin and pleading that it’d been a decision made by the Club. Alfin for a second time asked Danko to reserve his response. “He was asking for his followers to boycott 21 local businesses,” Spradley then said. “And the sole reason for his request to boycott these businesses including my law firm is that we do or we have advertised on his archenemy Flagler Live. That’s it, that’s the reason why.” 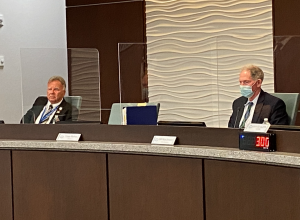 At this point, Danko’s frustration was about to boil over. Spradley continued, “This particular individual, out of one corner of his mouth, says he supports businesses-” Danko cut the lawyer off for a third time, telling Alfin: “Alright, I’ve had enough of this Mr. Mayor. The Trump Club is not on the agenda of this Council!” Alfin slammed the gavel and attempted again to silence Danko. “This man is just making stuff up trying to pin it on me,” the Councilman said. “I’ve had enough of this garbage from this guy!” Amid continued pleas to Danko for him to yield, Alfin delivered a frank reply: “Then leave the dais.”

“I’m appalled at you allowing this,” Danko said, now turning his frustrations to the Mayor. Now escalating to a yell, he argued to Alfin that “he doesn’t have a right to come in here and present false facts!” Again gaveling at Danko, Alfin told him, “that’s enough.” He turned to Spradley and asked him to continue.

“I’ve said nothing about any clubs,” Spradley responded. “I’m talking about Mr. Danko’s-“. Danko interrupted a fourth time. “You’re talking about the Trump Club and their press release. That’s 575 members, sir. 575 members, I reposted a press release. You’re in dangerous territory as a lawyer and you should know it!” Alfin gaveled an undeterred Danko once again, before City Attorney Bill Reischmann spoke up.

“All members of this Council are not to speak over other members of this Council,” Reischmann reiterated, a point he’s touched on more than once in recent times. “When they receive direction from the Mayor, they are to follow the Mayor’s directions. The Mayor has the power to remove individuals, including Council members, from this gathering if the order is not followed, and his orders are not followed…sometimes in this business we hear things we don’t like to hear, and I respect that, it’s painful at times to hear certain things, but we are required to keep order and to follow the rules, and it’s my legal opinion that the comments that were made during public comments this evening do not rise to the level that would require the Mayor to cause this individual to cease his presentation.”

In finishing his comments, Spradley said: “My concern is the viewpoint that’s being expressed through this Council to other businesses. This Council has sought not only to satisfy its constituents, which my employees are for, but also wants to bring in business. The message that I’m hearing to businesses is, ‘come to Palm Coast, we like business. Unless you advertise with the wrong guy, then we’re going to do everything we can to undermine you and take away your employees’ wages.’”

Following Spradley’s conclusion, Alfin allowed Danko to make his case: that the boycott was presented to the Board of Directors by a member, and that upon presentation to the club, it was supported unanimously. Danko called Spradley “an anti-Trumper” and “a liberal” derogatorily, and bemoaned what he saw as a personal attack. Again Danko criticized Alfin for sanctioning Spradley’s speaking time, a complaint Alfin did not respond to.

Procedurally speaking, Spradley was entitled to bring up a matter not on the agenda. Almost every Council meeting has speakers raise issues not on the meeting agenda, and it’s not something the Council has ever acted to deter or prohibit. As for naming Danko directly, there was less immediate precedent since Danko joined the dais, but in his role as counsel to the Council, Reischmann interpreted Spradley’s remarks as fair game.

What is Flagler Live? 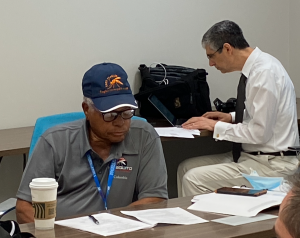 Pierre Tristam (right, at a Mosquito Control meeting in June) is one of Flagler County’s most widely followed journalists. ⓒ AskFlagler

In the words of a contemporary: Flagler Live is a nonprofit news website founded by Pierre Tristam, a journalist who currently boasts over 30 years’ experience. As editor and publisher of Flagler Live, Tristam’s site updates with regularity, usually multiple updates a day on local news, as well as commentary on issues at home and abroad. The site is one of the most viewed news sources in Flagler County, having grown to six-digit monthly viewership since its inception in 2009.

Before starting Flagler Live, Tristam wrote for the Daytona Beach News-Journal, another heavy-hitter in Flagler news. It’s been a longstanding and common assertion from mostly conservative-minded readers that Flagler Live wavers further left than is pleasurable, a notion that the Trump Club espoused with fervor.

The full press release sent out by the Flagler Trump Club reads as follows:

“At our September 20, 2021 meeting the Flagler Trump Club voted overwhelmingly to boycott all sponsors of the FlalgerLive.com blog.

“This online blog masquerades as a legitimate unbiased news organization, but in reality it is a liberal socialist political blog ran by a former Daytona Beach News-Journal editorial writer who was laid -off and now goes by the name of Pierre Tristan.

“This online blog hides behind a Not-For-Profit Internal Revenue Service 501(c)(3) Corporation and claims to be ‘organized exclusively for charitable and educational purposes’ and not formed for ‘profit or financial gain.’

“Anyone who has clicked on Flagler ‘Fake News’ Live knows the truth – it is a radical opinionated socialist “Blame America First” blog teetering on Communism that distorts the facts to defend extreme liberal beliefs.

“Worst of all, while Pierre Tristan constantly attacks elected Republican officials with blatant liberal lies, including Governor Ron DeSantis, he saves his most poisonous leftist venom for President Trump and his supporters.

“Enough is enough!  It’s time to push back on this fake news fiction and propaganda…and we do it by using a favorite tool from the liberal’s war chest – Boycott!

“Below is a current list of all the advertising sponsors of FlaglerLive.  We encourage all our members to pick up the phone and call each one listed and ‘politely’ let them know you will not do business with them until they stop sponsoring this socialist left wing anti-Trump blogger!

“Without saying, as always, we are courteous while calling and reminding these businesses that Palm Coast is Republican Red and Flagler County is Trump Country!

“Please pass the list below along to your family, neighbors and friends!”

Following this message, the release listed each of the 21 businesses it was asking its members and their friends and families to stop supporting. Among the list were Daytona State College, the City of Palm Coast, and Grace Community Pantry. A followup announcement removed Grace Pantry, AlarmPro, and Total Secured Data Storage from the boycott. After the list in the email was a photoshopped picture defacing Tristam’s likeness.

At the Council meeting on October 19th, the first since Danko and Spradley’s exchange, no public commenters brought up the Trump Club or Flagler Live.

What Actually is Fake News?

(For full consideration to our readers, the following portion adopts the editorial format of writing, and reflects the author’s opinions.)

Ever since Donald Trump began his first bid for the presidency, he and his supporters’ relationship with major news media has been rocky. ‘Fake news’, as the Trump Club characterized Flagler Live, is certainly a real thing: it is unavoidable that there exists major news organizations in America that act chiefly in bad faith, intentionally spinning their information to rally readers behind a cause or gather them around a subjective idea. On the other hand, there are instances of the subjects of legitimate news stories branding outlets as ‘fake news’ for reporting on unsavory developments they were involved in.

The faculties needed to discern one scenario from another, true objectivity in news consumption, are far from universal. It requires being proactive, and the ability to remove what one wants to be true from the act of reading news. Social media has allowed information to spread faster than ever, and the rapidness of its onset has left much of the population without the requisite time to learn how to foster a healthy relationship with a new phase of news media.

Generally, readers are susceptible to adopting outright untrue beliefs if reading misinformation taps into a feeling they already have. This is confirmation bias. What makes a reader feel good and what’s objectively true are often times opposing things, and a community of like-minded, passionate citizens who don’t make that discernment can kickstart anything from a new urban legend to outright acts violence and destruction. A public which feeds its biases above all else is one which quickly becomes radicalized.

When an elected official calls an outlet fake news, one of two things has happened. Either they’re identifying an intentional manipulation of the outlet’s readership, or the elected official is seeking to disarm the outlet’s merit in the minds of their constituency, for self-serving and nefarious purposes. Both scenarios occur. Both lead to many people being misled. For truth to prevail, a great number of people inevitably have to override their own internalized biases. Democracy, and with it society, hinges on individuals making that choice.

Flagler readers have to be brutally honest with themselves: is it the news outlet who’s acting in bad faith, or the elected official?

“In seeking truth you have to get both sides of a story.”