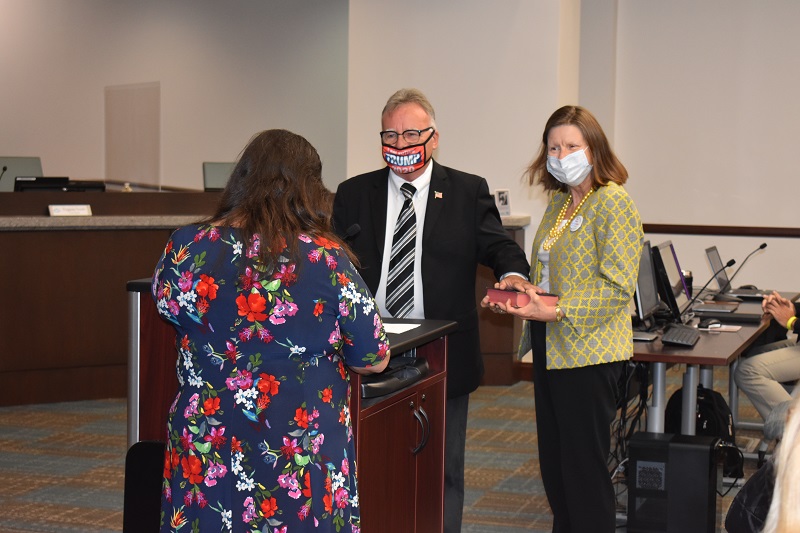 Councilman Ed Danko, being sworn in to the Palm Coast City Council alongside his wife, Beverly, on November 17th. ⓒ City of Palm Coast
ADVERTISEMENT

Palm Coast city councilman Ed Danko defended his usage of a Trump-themed mask on his personal Facebook page Thursday afternoon. According to Danko, he’d received an email from a constituent imploring him to reconsider his usage of the political mask. Danko went on to post the full reply he sent to the Palm Coast resident, which read:

“Today I received an email from a resident complaining about me wearing a Trump mask at City Council meetings and telling me to be non-partisan. I am sharing my response to that person below:
I’d like to correct a few misconceptions here.
The city council is not a non-partisan body. Elected members of the council can and do belong to political parties. In fact, presently all current members are registered Republicans.
However, elections to the council are conducted as non-partisan elections, which simply means that party affiliation is not attached to the candidates on the ballots or on campaign signs. So, when you cast your ballot you will not see an “R” or “D” in front of a city candidate’s name, nor will you see Republican or Democrat on a candidate’s yard sign.
I am a registered Republican. I am a lifelong Republican and proud of it. I am also Vice-President of the Flagler Trump Club and proud of that too. I support President Trump and I will work for his re-election in 2024, should he decide to run again.
I was endorsed by the Flagler Republican Party. My opponent, who is a Democrat, was endorsed by the Flagler Democratic Party. Both parties campaigned for their candidates.
Over 60% of the voters elected me because of my Republican conservative values and positions, which includes Trump values, such as less government interference, free enterprise and lower taxes.
Elections have consequences. Florida is still a “Red” state and the same goes for Flagler and Palm Coast.
Finally, we have freedom of speech. Wearing my Trump mask is protected by that freedom. If my Democratic opponent had won instead of me and wore a Biden mask to council, be assured I would be the first person to stand up and defend his right to do that. This is an American freedom. It is the freedom I defended while serving in the United States Navy and the freedom I still defend today serving in the United States Coast Guard Auxiliary.
I will continue to wear my Trump mask.”

Councilman Danko has been outspoken about his support for President Trump all throughout his campaign cycle and since his swearing in. In addition to his social media profiles showing him donning a signature Make America Great Again cap, Danko’s campaign website also advertises his Trump support prominently. Danko touts an endorsement from former Trump campaign manager Corey Lewandowski.
As stated in his message, Danko is Vice President of the Flagler Trump Club, the most notable of Flagler County’s Trump-centric grassroots support groups. Danko tagged 97 of his Facebook friends in the post, and received comments of support from dozens in the first hour the post was live.
In this article:donald trump,ed danko,palm coast,palm coast city council