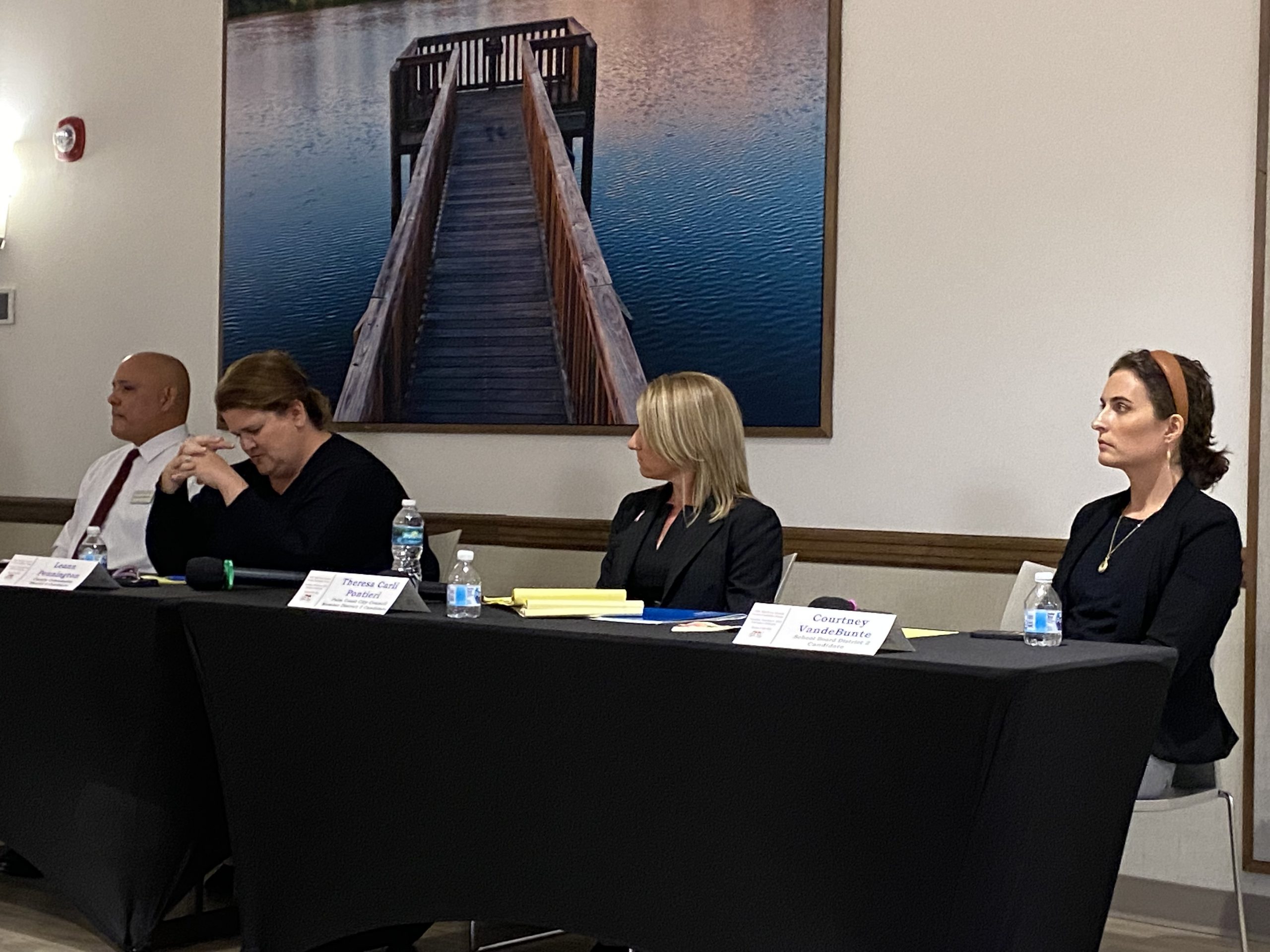 PALM COAST – Flagler County voters were given a thorough opportunity to vet six of the eight candidates appearing on the November ballot Thursday night, thanks to the Flagler Tiger Bay Club’s election forum. The event was organized by the club’s nonpartisan board, and moderated by former Flagler Sheriff Jim Manfre.

County Commission candidates Leann Pennington and Jane Gentile-Youd, City Council candidates Alan Lowe, Fernando Melendez, and Theresa Pontieri, and School Board candidate Courtney VandeBunte agreed to participate. Two candidates elected not to participate; Cathy Heighter skipped due to being sick, and Will Furry turned it down for unstated reasons. 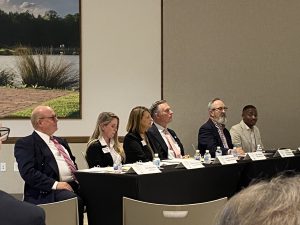 The first question prompted candidates to describe if they’d ever been arrested, ticketed, or had their license suspended. VandeBunte and Melendez had nothing to report. Pontieri described a DUI arrest in college and said she’d learned from it. Pennington said that around the turn of the millennia she’d briefly had her license suspended due to a late fine payment. Lowe said he received a right-on-red violation ticket years prior. Gentile-Youd said she’d been given a speeding ticket three years ago.

The next question was the first to be tailored to a specific candidate, this time to Lowe. It challenged the third-time candidate to give his plan to restore the trust of the citizens in the City Council following a series of public blunders. Lowe cited personal town halls and community sessions that he’d held, and said he planned to continue them if elected.

Melendez received the next question, asking how to attract new businesses to Palm Coast. He stressed diversity, hoping to include technological companies in the area as opposed to the current service-driven economy. Melendez here, as he did multiple other times throughout the night, cited his experience on the county Planning & Development Board.

In keeping with the Palm Coast theme, the same question went to Pontieri. She advocated for developing into west Flagler County, and building up more industry to share the load of Palm Coast’s tax base. This, she said, could potentially make the kind of rollback property tax rate that many citizens have clamored for more feasible.

Pennington was then asked about how she would bring tech companies to Flagler County. She agreed about bringing resources west of US-1, but said the county couldn’t afford to pick and choose which industries it welcomes amidst the current local economic climate.

Next was VandeBunte, receiving a question from Pastor Wines. Asked how to balance quality education with hot button issues, reminded voters that Critical Race Theory is not in Flagler County, and vowed to uphold the education standards set by the Governor. It was a pledge to conservative voters that she wouldn’t resist controversial education legislation on the Board, but short of an endorsement of these measures on a personal level.

Gentile-Youd was then asked the same question as Pennington, an opportunity which she took to advocate against the west side of the county receiving emphasized treatment. To balance it out, however, Gentile-Youd pushed to have expanded broadband access in the Mondex and Daytona North communities.

Another all-encompassing question was issued to the candidates, asking if they’d ever declared bankruptcy or had a civil judgment rendered against them. All candidates gave a plain No answer except Lowe, who mentioned the red light ticket and a past foreclosure. 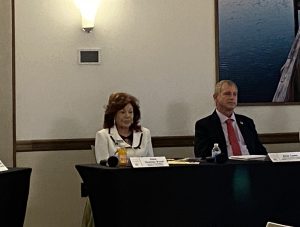 Next asked to all candidates was their strategy to promote affordable housing in Flagler County. Melendez advocated for discussions that include developers and realtors. Pontieri suggested to base multi-developments off how much demonstrated need there is. VandeBunte upheld highly rated schools as a top attractor of professional and business owners, and stressed the need of lower-paid school faculty to have affordable housing. Gentile-Youd pushed for condos with low down payments. Pennington erred against local government incentivizing development, and said that developers aren’t interested in making the kinds of homes that might quell the affordable housing need.

Pastor Wines then asked Pontieri about a solution to the city’s homelessness issue. Pontieiri took it from a mental health and addiction standpoint, hoping to reached the homeless community on that level.

Pennington was then prompted to weigh in on the state of and need for public transit in Flagler County. She stopped short of advocating for more public transit infrastructure, but pointed to the Sunshine Bus Company in St. Augustine as an example of the concept executed well.

Gentile-Youd was asked for a top three list of priorities, and though she didn’t have a defined three points, she took the opportunity to form more robust discussion on certain consent agenda items, and expand public comment sessions from three minutes per person to five minutes.

Turning to Lowe, Moderator Manfre asked whether he’d met with other elected officials to prepare for the role. Lowe is close friends with City Councilman Ed Danko, and though he didn’t mention Danko by name he did say he’d met with most currently seated elected officials. In the same vein, Pontieri talked about conversations she’d had with Palm Coast City Manager Denise Bevan, in which she’d learned more about the city budgeting process.

Melendez, in speaking about the budget, harked on the importance of essential services like the fire department, and said he didn’t think there was likely room in the budget to find the cuts for a rolled-back millage rate as many residents wanted. He went on to speak to his positive relationship with the realty community when asked if governing bodies treated the industry too kindly. He stated that this gave him a good perspective on the housing crisis.

Pennington and Gentile-Youd were then both asked if they supported budget increases for the Flagler County Sheriff’s Office. It’s a measure with overwhelmingly positive public outlook, and so Pennington endorsed a fully-funded FCSO and left it at that. Gentile-Youd had a bit more to say on the matter.

With Sheriff Rick Staly seated in the audience in Gentile-Youd’s view, the candidate said that the Sheriff’s Office budget was in need of cuts, and that it was his responsibility to find the money within his own programs to afford pay raises, not the County Commission’s. “I think it’s a disgrace,” she said, saying that the local fire departments were woefully underfunded and ought to receive the fruits of potential FCSO cuts. She additionally cited low crime numbers as a reason to ease up on law enforcement funding.

Moving toward the final round of questions, VandeBunte then was asked to weigh in on the performance of Superintendent Cathy Mittelstadt. VandeBunte reserved full judgment until after this school year, but praised the strategic plan that Mittelstadt has implemented over the last year.

Lowe, asked about the debacle between the City Council and local Green Lion Café, lamented that a deal couldn’t be struck between the city (and its publicly owned restaurant building) and one of the area’s most beloved local eateries. He tied it to an overall need for more economic development.

VandeBunte was then asked a question submitted by AskFlagler: in essence, how can the School Board deal with divisive issues without repeating incidents like the November 2021 meeting that saw police interjection, violent and sexual threats against students, and little in the way of progress on the issue at hand. Her answer was to promote unity and transparency, to try and rehabilitate community confidence in the Board and its proceedings.

Another AskFlagler submission came next, this time to the County Commission and City Council candidates: how big a priority is protecting the county’s green spaces from being developed over? The candidates uniformly held it in importance, and each described personal perspectives that backed up their positions.

The final question of the evening went to VandeBunte, and it was something of a layup: does she support the ballot initiative to continue the county’s half-cent sales tax to fund public schools? The tax is about as popular as any tax could possibly be, and so VandeBunte gave her enthusiastic support. By a show of hands, the other candidates all gave their approval as well.