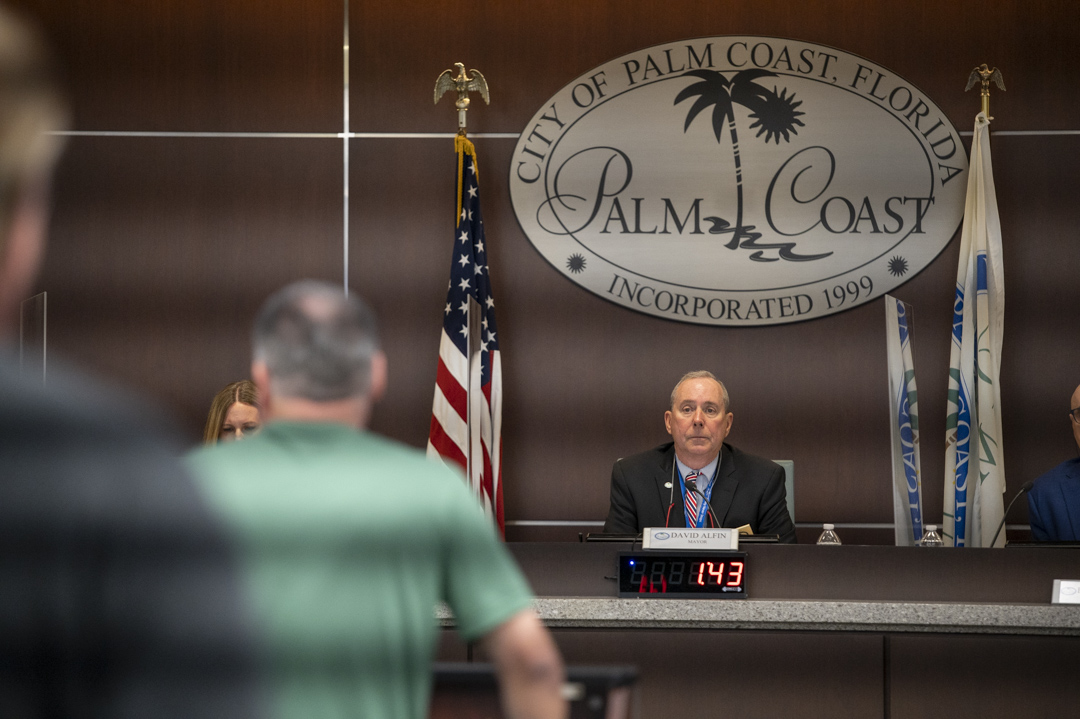 The below article described an interview that was to take place between Palm Coast Mayor David Alfin and Green Lion Café owner Chris Marlow. It should now be noted that Alfin has pulled out of the interview. The reasoning provided by the city of Palm Coast is that a letter from the Green Lion’s attorney has caused the need to review the situation, making Friday’s scheduled interview date untenable.

“We will not go quietly.” This was the most recent statement by the Green Lion Café as of Wednesday afternoon. This promise will now been followed up on.

Palm Coast Mayor David Alfin has agreed to sit down for a radio conversation with Chris Marlow, co-owner of the Green Lion Café. It’s the first at-length conversation between the two parties since the beginning of an extended negotiation process which has been contentious at best and vitriolic at worst.

The conversation will air live at 9:00 am on Friday, July 1st. It can be tuned into on 93.5 FM, 1150 AM, or via web at newsdaytonabeach.com. It will take up the first half hour of Good Day Daytona, a weekday morning news show hosted by WNDB’s Trei Johnson (Writer’s Note from Chris Gollon: I myself will be a part of the discussion as a WNDB reporter).

One of Marlow’s chief criticisms of the Palm Coast city government has been communication. The Marlow family and their associates have described being told about developments in the process at the last second, including that their restaurant’s fate would be discussed at the June 21st Council meeting. “You emailed me [at] ten o’clock on a Friday night asking for my financials,” Tony Marlow snapped at City Manager Denise Bevan that morning. “Which you have no right to do.”

Chris Marlow objected during the meeting to being confined into one three minute public comment slot to plead his case, versus longer presentations for other parties during that meeting. On Friday he will enjoy at least a 30 minute block of time to air his grievances.

Marlow and his family own the Green Lion and Golden Lion cafes, both well-known and popular establishments in Flagler County cuisine. For the Green Lion, they were given a lucrative offer in 2017 by the Palm Coast government to open up in a restaurant building adjacent to thePalm Harbor golf course, at the time a strained amenity.

The City Council raised objections to their deal in 2022, with critics calling it ‘a sweetheart deal’ and accusing the Marlow family of taking advantage of taxpayer funds. The family came to a City Council meeting in February in which their deal was in danger of being axed. They were joined by dozens of employees and community members who chastised the Council for jeopardizing the Green Lion, leading to a decision to go back to the negotiating table.

Come June, the negotiations crumbled and the Green Lion was once again put at risk of being ousted. Nowhere near as big a crowd assembled this time, potentially as a result of the short notice that Tony Marlow bemoaned. The Council voted to approve an ultimatum with the family: agree to terms by July 1st, or see their location put out to bid.

The discrepancies between the two parties amount to factors like monthly cost per square foot and who pays for each utility. The city wants the restaurant to split the water bill with them; the Marlows contend that the city uses that water line for purposes that have nothing to do with the restaurant.

Alfin and Marlow will have their conversation with hours remaining in the period for a deal to be reached. It’s still to be seen what effect, if any, the chat will have on the final stages of negotiation. It will, however, mark the first time both parties are given the opportunity to make their case transparently before the public.

“Palm Coast Council is deliberately extorting our family,” the Marlows said in a post to the Green Lion’s Facebook. “They have been trying to throw us out for the past year and we have the emails to prove it – they aren’t worried about taxpayers. They have spent endless amounts of taxpayers money on the trailer concession agreement. what is their agenda?”

The majority of commenters on social media have shown support to the Green Lion, sometimes accompanied with derision for the City Council.