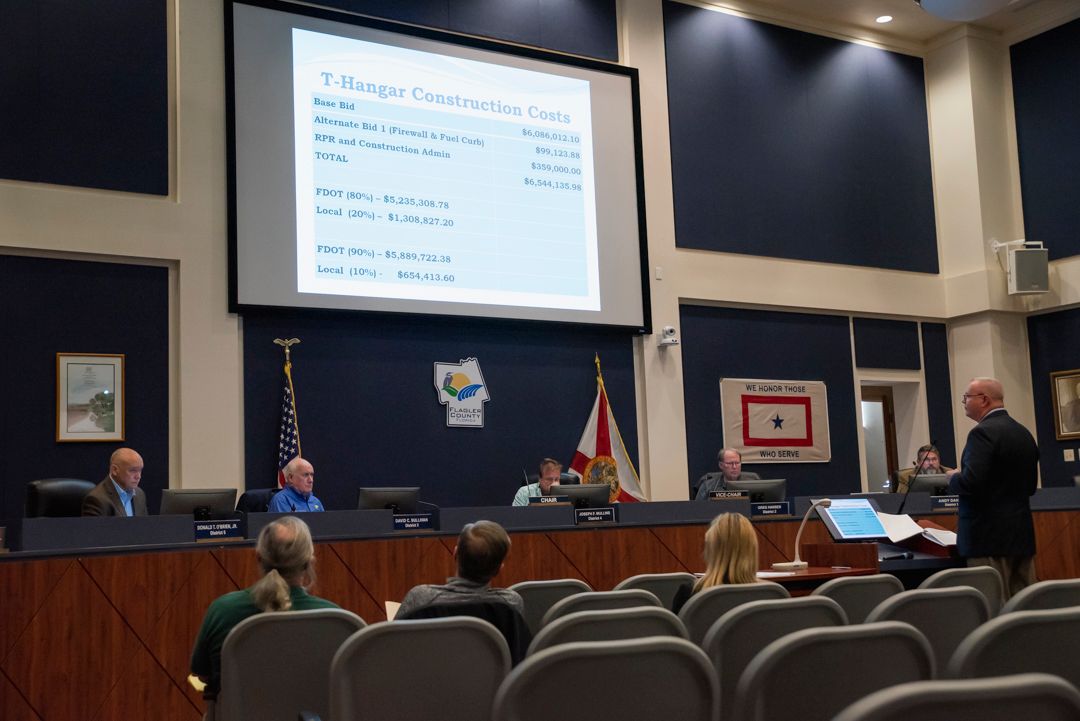 BUNNELL – The Flagler Board of County Commission heard two extensive proposals Monday – one for weighty renovations to the Flagler Executive Airport, the other for a proposed public library on the south side of the county. Since the meeting was a workshop, nothing was on the table to be officially voted on, but the Commissioners provided consensus support to the library, meaning it will be taking forward steps in the near future. 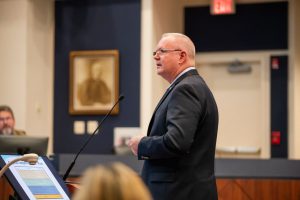 Airport Director Roy Sieger presented before the Board of County Commissioners on Monday. ⓒ Stephen Helfrich

Airport Director Roy Sieger presented to the Commission an extensive plan to beef up the airport’s facilities over the coming years. He showed some previous improvements as well, such as a greatly expanded electrical vault which had been upgraded from a glorified supply closet to a spacious building which could fit several cars if it had to. The vault includes environmental controls and a new backup generator.

Current airport projects include replacing ATC equipment ($302,304 paid by the Florida Department of Transportation), newly designed T hangars ($117,000, also FDOT subsidied) and taxiway rehabilitation ($185,000 in FDOT money). Sieger spoke to the wait list for private customers to get into a T hangar, currently at 122 people. Once 42 proposed hangars are added, they’d hopefully produce $215,400 in annual revenue.

Construction costs for the airport were another concern entirely; Sieger spoke of rising price tags causing unexpected delays. The base bid was reported to be just over $6.5 million, with FDOT covering 90%. $654,000 of that money would be funded by local taxpayers. 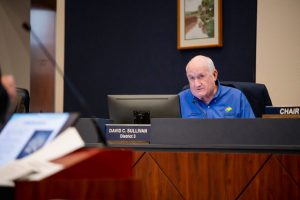 A new terminal building was also a tentpole of Sieger’s presentation. Commission Chair Joe Mullins seemed taken aback when he learned the new terminal would carry its own separate $10 million cost, independent multimillion dollar hangar extensions they’d heard about before.

For the airport’s Capital Improvement Plan, the bill is projected to run $37,277,000. Commissioner David Sullivan briefly pitched in to solve the airport’s marketing issues, suggesting a sign out front which says ‘Flagler County Airport’ might not be the most effective way to get residents to refer to the airport as the Flagler Executive Airport, as is its official name.

On the other hand from the impressive cost figures put forth by Sieger, the airport was able to report a handful of unanticipated sources of federal funding. The CARES Act, signed into law by President Trump in 2020, provides the airport with $69,000. Grant money would tack on an additional $116,000 and change, and the Infrastructure Investment and Jobs Act signed by President Biden in November gave the airport a whopping $1,475,000 spread out over five years. 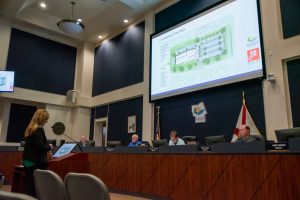 Flagler Public Library Director Holly Albanese presented on a planned new public library set to be built off of SR-100 in Bunnell. The library had been an idea since 2014, but is only now starting to look like a near-future event.

Sprawling floor plans were presented by Albanese, detailing a 32,000 sq/ft facility which serve both as a new public library and as a multi-use facility which could accommodate business gatherings, audio production, and even outdoor live music events. A Health and Human Services section would also be located within the new facility. Stewart-Marchmann-Act would also have a room to address mental health needs within the community.

“What we’re building is the library of the future,” Albanese said. “But it’s really the library of today.” Architects Ruffin Rhodes and Max Brito attended the meeting via Zoom from their Orlando offices, but the commissioners never piped up with a question for them. 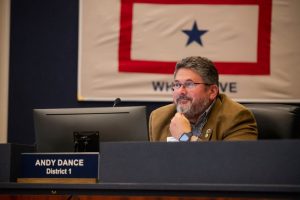 The current public library off Palm Coast Parkway generates a bit over $100,000 in annual revenue for the county, and this new one would be expected to produce about the same. The total cost would be around $16,000,194 in Albanese’s projection, and it would open in summer or fall 2024 at the earliest.

Commissioner Greg Hansen was first to offer his support for Albanese’s presentation, saying it had encapsulated all of the Board’s concerns concisely. Andy Dance was a bit more reserved, wanting to go through the county’s upcoming strategic action plan sessions before deciding to write the multimillion dollar check the library would require. He specifically brought up a potential new fire station as something which may be competing for the same funds. Dance also raised issue with the current sidewalk and bicycle access to the area the library would be constructed, off Commerce Parkway in Bunnell.

Only two individuals utilized the public comment section at the end of the meeting (only them and three members of the local media were in attendance), both offering their wholehearted support for Albanese and the library. 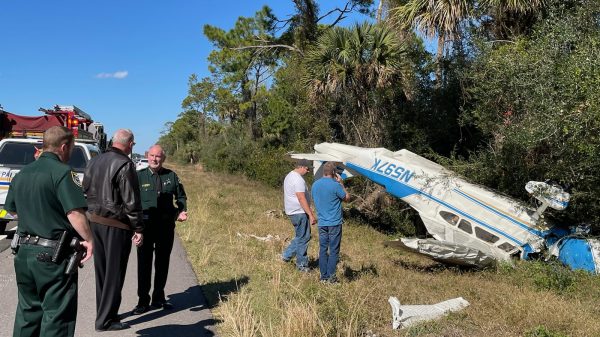 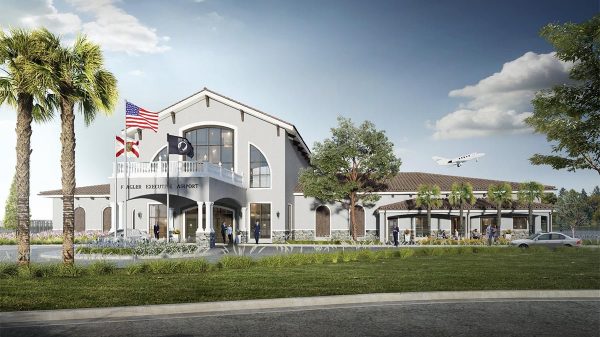 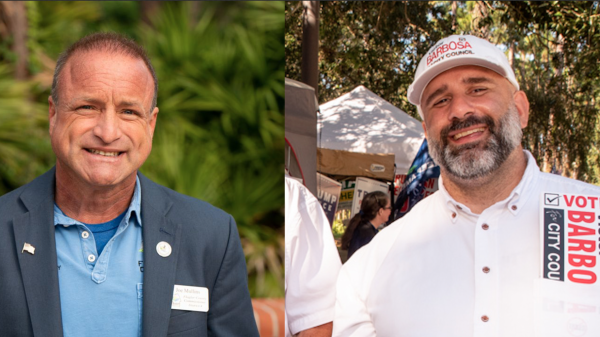 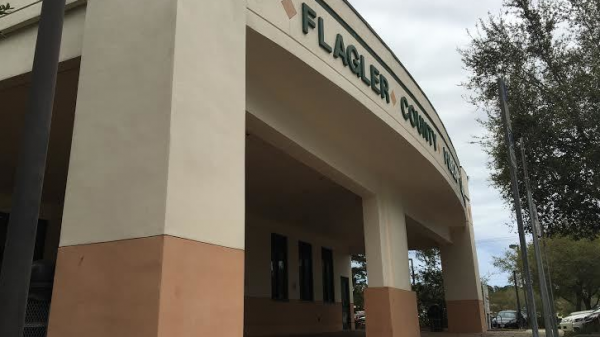 According to a press release Wednesday, the Flagler County Public Library is planning an event to honor members of United States armed forces who...