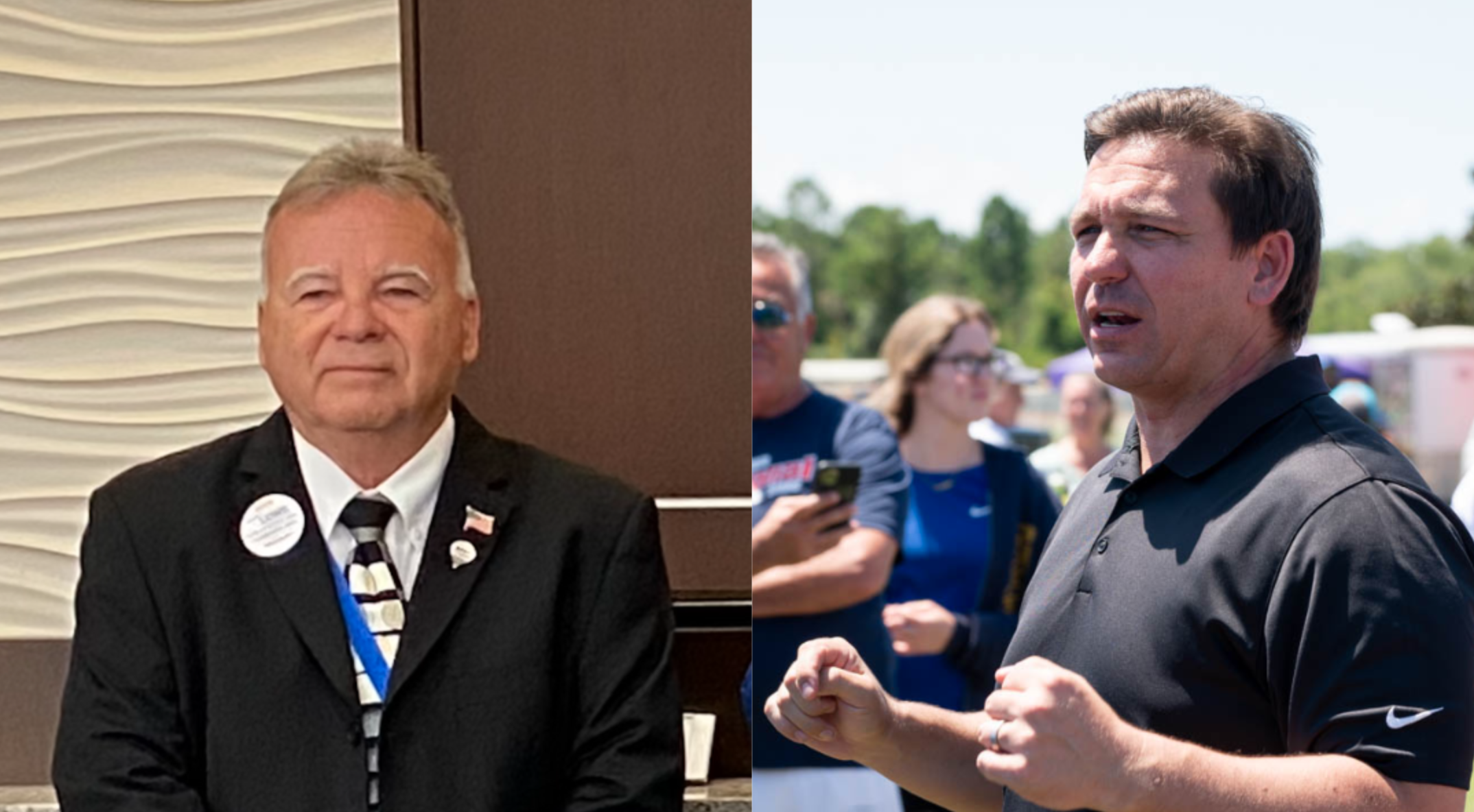 Ever since Alan Lowe threw his hat in the ring for Palm Coast’s recently vacated Mayor post, one of his closest campaign helpers has been City Councilman Ed Danko. Both Lowe and Danko have stated that Danko is not Lowe’s campaign manager, but that his capacity with the campaign is advisory in nature.

Danko is now receiving criticism for a conversation he had with a voter, recorded by the voter’s Ring doorbell. Both Danko and Lowe have been regularly knocking on doors to communicate with voters for the July 27th election, hence Danko’s visit to this individual on Monday. As seen in a video provided to FlaglerLive by individuals who are kept anonymous by their writer, Danko began the conversation by asking if the voter was aware of the upcoming election. The conversation turned quickly to Milissa Holland, and the reason for her recent resignation. The woman recalled that Holland cited her ailing daughter, to which Danko quickly told her “that’s a lie.” He said that Holland’s daughter was waitressing in Flagler Beach, and therefore couldn’t be too ill.

The video of the conversation, courtesy of FlaglerLive:

For context, Danko recently vented several personal frustrations in the Council comments portion of Tuesday’s meeting, during which he accused former Mayor Holland of being under criminal investigation. He stated then that Holland lied about resigning to be with her daughter, and he’s remained adamant of such. Danko told the Council and the meeting’s attendees that he’d been given a confidential briefing from a law enforcement agency who informed him of Holland’s charges. At the meeting Tuesday and in the time since, Danko has refused to name which agency he says gave him the briefing, saying its confidential nature has bound him to secrecy. No other members of the Council or city staff, including acting Mayor Eddie Branquinho, have said they’ve received a similar briefing.

The comment Danko made that ultimately brought this attention was, “Ron DeSantis came here, and said, ‘either resign or I’ll pass the criminal charges up’. She abruptly resigned, she used her daughter as an excuse.” Danko’s claim of Holland warranting the Governor’s interference is certainly a serious accusation, and very little is known on the record about the degree to which Holland has been investigated since first taking office. Multiple city employees claimed they’d been interviewed by the FBI about Holland last year, but neither FBI or any other major law enforcement entity has gone public about investigations involving Holland. The Florida Commission on Ethics received a complaint from former employee Jay Maher, but this stands independently from what Danko claims is happening at the state level.

Ron DeSantis’s office has stated to FlaglerLive that Danko’s claims are untrue. Ron DeSantis had not visited Palm Coast since before his election in November 2018, they say, and communications director Taryn Fenske has said that it wouldn’t even be in the scope of DeSantis’s job responsibilities to give Holland such an ultimatum. The Governor’s office could not be reached this weekend to give further comment to AskFlagler, as the story became known shortly before the end of business hours.

In comments given to AskFlagler, Danko characterized the original story as coming from ‘Flagler Fake News Live’. In regards to Fenske’s statement calling DeSantis’s actions described by Danko as “impossible”, Danko said: “They can say whatever they want. All I did was [I] told this person what I had heard from my briefing.” He then clarified that the purported encounter between DeSantis and Holland was described to him at the same confidential briefing he’d referenced at the recent Council meeting. “I have nothing else to say about it,” Danko added. “Just because the person asked me about it, and I told them.”

Danko also wondered aloud about the legalities of his conversation with the voter being recorded without his knowledge. As stated by SecurityProFlorida.com:

Florida Statute §810.145 titled “Video voyeurism” makes it illegal to record video of a person without their knowledge in a setting where they have a reasonable expectation of privacy. The laws do not apply to the following instances of home security:

Danko’s conversation with the voter would likely satisfy the second and third bullet points even if the resident did not have a posted notice about their doorbell camera. The doorbell did not appear to have anything obstructive around it, and a person’s doorstep is, in suburban neighborhoods, not a place one could safely assume they were not being recorded. 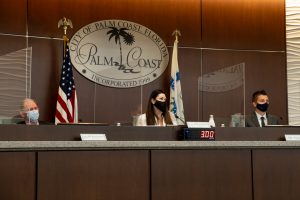 Milissa Holland (middle) resigned suddenly in May, citing a need to tend to her ailing daughter. Councilman Danko has accused Holland of resigning due to criminal investigation. ⓒ Stephen Helfrich

Alan Lowe, who Danko was campaigning on behalf of when speaking to the voter, was also asked about Danko’s exchange. “Obviously I wasn’t there when he made those comments, and I have not spoken to Governor DeSantis about it,” Lowe told AskFlagler. “I have no knowledge about any of that, and I don’t support anything that’s wrong. All I know is, when Mayor Holland resigned, I stood at the podium and wished her daughter the best of health, and Mayor Holland the best future.” Lowe chose not to speculate about whether Danko had misrepresented the situation, either intentionally or in error.

As circumstance would have it, Governor DeSantis was in Palm Coast when news of Danko’s exchange first broke. He’d flown in to throw out the ceremonial first pitch at a Little League Baseball tournament at the Indian Trails Sports Complex. A variety of elected officials were on hand watching the Governor’s appearance, including former Mayor Holland. AskFlagler asked Holland about Danko’s comments first accusing her of being under investigation, to which she had no comment. Holland said that since resigning, she’d been focusing on her daughter and her job.

Voting in Palm Coast’s special election for Mayor is already underway with early voting. Find out how to vote today from the Flagler Elections Office.

UPDATE 7:07 pm: County Commissioner Joe Mullins spoke to Governor DeSantis and members of his staff at the Governor’s Friday appearance in Palm Coast. He recalled talking about Danko’s claim: “Governor’s PR person said he has spoke to no one and was very upset that a person on the council was using him in any conversation to attack the former mayor. They also added he has not endorsed or approved any pictures to be used in any campaign material. And highly discouraged it. It was a tense situation and it was made clear to me they were very unhappy about the latest drama and being drawn into it.

“I was told and that they would be watching it closely. It was a very embarrassing moment for this community. It was very obvious he wanted no politics around him and wanted to be here for the kids and made it totally about that.

“I also had several other Florida commissioners bring up this embarrassing stuff at NACO in DC earlier this week. As a representative of this county; I am ashamed of this being casted on our community and it needs to end immediately.”