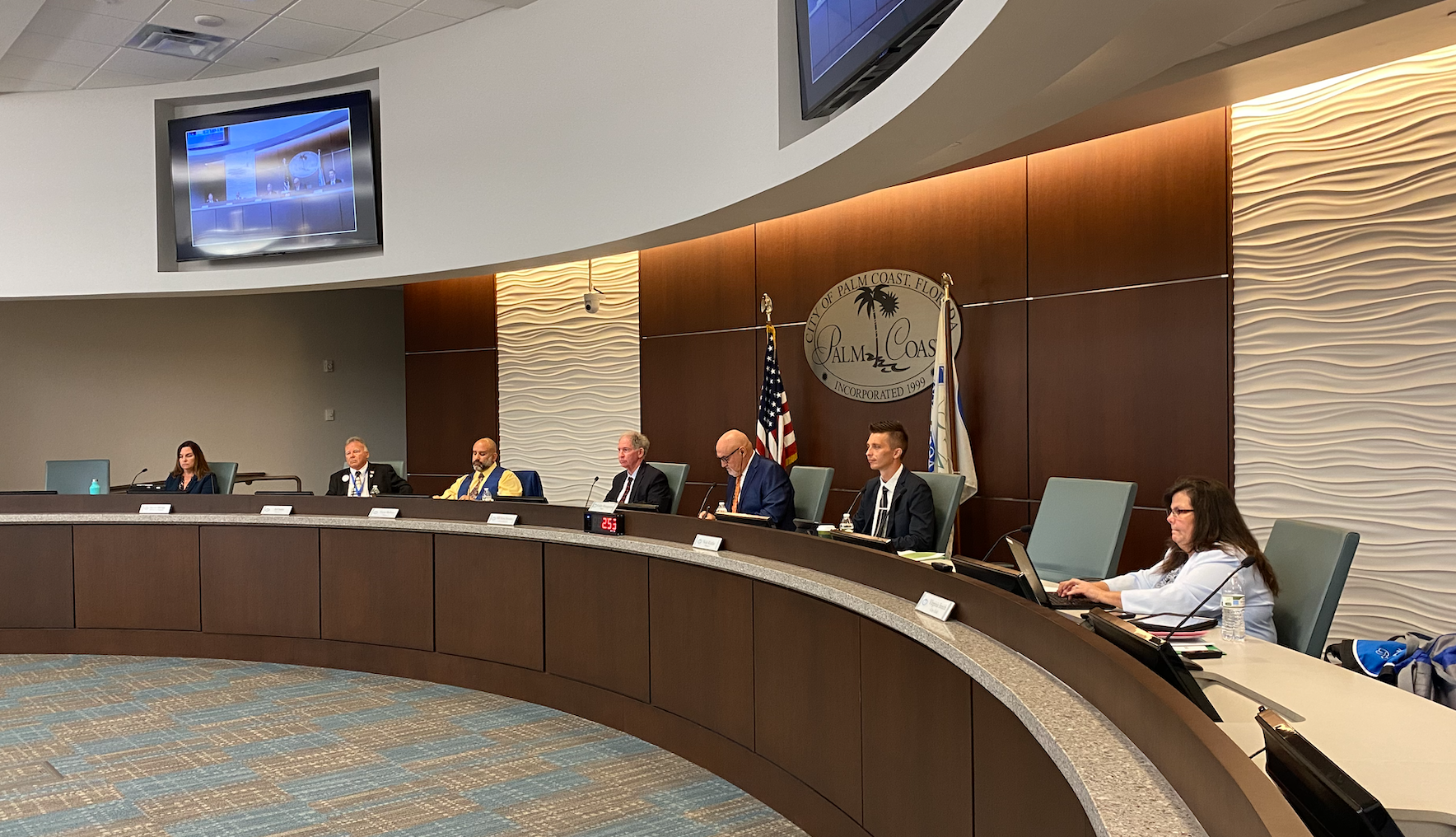 Tuesday’s City Council meeting started off relatively routinely. Acting Mayor Eddie Branquinho was his first meeting back from a family trip to Portugal, and had the opportunity to lead the Council and several dozen attendees in the Pledge of Allegiance, and call roll for his fellow Council members. 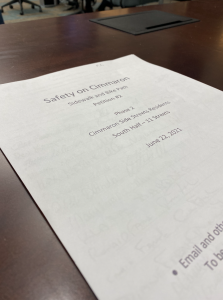 Public comments covered a variety of different topics, as they always do. Bob McDonald opened the section up to implore why the City Hall was, in his words, not properly accommodating to residents with disabilities. He also observed that the Hall had added a metal detector for security as he’d requested, but that there was no one in the hallway operating it and conducting safety checks.

Four speakers came to address recent safety issues on Cimmaron Drive, with most thankful for how the City of Palm Coast has worked with them so far. On hand at the meeting was a petition they’d gathered of C section residents, on which nine pages were filled with signatures imploring for the construction of a sidewalk alleviating dangers for cyclists and pedestrians.

Among the four who mentioned Cimmaron Drive: mayoral candidate Alan Lowe. Before comments began, acting Mayor Branquinho warned the three candidates in attendance (Lowe, David Alfin, and Cornelia Manfre) that they were not to use the public comments section for campaign purposes. Lowe complied with Branquinho’s request, and used his time to reinforce what Cimmaron residents were saying as a C section resident himself and to ask for a prevision in the contracts of future City Managers avoiding thousand-dollar payouts for vacation/sick days as now former Manager Matt Morton received after his resignation.

Democratic Women’s Club President Jill Reynolds was on hand to request Council consideration for a trail and plaque honoring Shirley Chisholm, the late Palm Coast resident who’d become the first black woman in Congress among other firsts. Branquinho asked Reynolds to come speak with him and interim City Manager Denise Bevan after the meeting, to go over ways to explore honoring the late Chisholm.

Speaker Michael Arnold approached the stand with a purpose: he levied accusations of misconduct against City Attorney Bill Reischmann, who he stated had violated whistleblower laws in contacting Arnold’s own private employer. Arnold was evidently not pleased with Reischmann’s reaction, telling Branquinho, “I like the little faces Bill Reischmann is making to me right now.” Branquinho reminded him to keep comments directed to himself, with which Arnold complied.

Carrie Purdy, swim coach at Matanzas High School, took the podium to advocate for the creation of a community center that could expand recreation and athletics resources for residents of Palm Coast. Purdy was skeptical of expenditures on a recently approved tennis and racquet center, calling it “a little overboard” to place large sums of money into something a little less universally appealing.

Mike Cocchiola, a prominent Democratic activist in Flagler County, came to oppose a half-cent county sales tax for public safety. Item G5 on Tuesday’s agenda was to approve a letter of support for the tax, and so after speaking on it Cocchiola was informed by Branquinho that he would not have the opportunity to speak again in the public comments section designated for the resolution. He was, however, backed up by Alan Lowe during Lowe’s comments.

The last three speakers all had the same concern: the proposed closure of Slow Way. All three citizens were strongly against closing the road, citing convenience, lack of data in support, and greater numbers advocating against closure. One speaker cited a gathering Monday night at Slow Way with Council member Victor Barbosa, in which they said their own side had a considerably greater presence. Though there have traditionally been residents at meetings also rallying for Slow Way’s closure, none stood up to speak until the final public comments section.

After public comments closed, Branquinho addressed some of the matters that were brought up. On Slow Way, Branquinho remarked, “it’s no secret, personally I’m against closing it and I’ve already said why” and that “I hope they don’t vote to close it”. On Cimmaron Drive, Branquinho concurred with residents: “I think we have a problem there…I want the people of Cimmaron Drive [to know] that you have not been forgotten”. Branquinho requested to speak with Purdy and Reynolds after the meeting to follow up on their requests. Bill Reischmann took a moment to respond to Arnold’s accusations, summing up his feelings by saying “I do my best to make sure [I’m] consistent with federal and Florida law”. 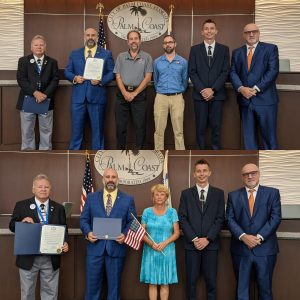 Three proclamations and presentations were on the agenda Tuesday. The first was to acknowledge Mosquito Control Awareness Week, in which Council member Barbosa spoke to Mosquito Control Board member Mike Martin, and M.C. District Director Mark Positano. Councilman Ed Danko then came down to honor Patriotic Palm Coast Weeks, and speak to the upcoming Freedom Fest being held July 3rd at Flagler Executive Airport. Third was a presentation on Flagler County Social Services led by staff from the county’s Departments of Social Services and Health & Human Services.

After Proclamations and Presentations was the Resolutions portion of the morning. First up: a decision on whether to approve a letter supporting a half-cent county sales tax, the measure which Mike Cocchiola spoke to at the beginning.

After a presentation outlining the tax, Coucilman Barbosa stated he was eager to support the Fire Department and Sheriff’s Office (which the tax would help fund) but was concerned about shoppers taking their business to Daytona or St. Augustine, hurting business in Palm Coast. Barbosa floated the idea of tabling the measure to give time to brainstorm alternate funding options. Councilman Nick Klufas made note that out-of-towners would be paying a portion of the bill when visiting Palm Coast and shopping in it. The two members briefly debated how much consumers would be driven to shop out of town, with Klufas then questioning how much cost would truly be levied. Branquinho related a story of when his son needed emergency services, and response time was critical. “They’re the ones who keep us sane and safe,” Branquinho said of Flagler’s fire and police forces. “Look at the cause. I would like my colleagues to put a hand to their heart.”

Councilman Danko was critical of the County for seeking Palm Coast’s approval on the tax, citing County Commissioners potentially not voting to pass the tax without the Council’s letter. There were no public commenters on the resolution (excluding Cocchiola’s from earlier) and Councilman Klufas motioned to approve the latter supporting the tax. No council member seconded it, and the letter failed. “Seconding the motion would’ve allowed you to say what you had to say.” Danko responded: “I don’t need a lecture from you…It must be a cold day in hell today, because the first time that I can ever remember, I actually agree with the head of the Democratic Party Mike Cocchiola…I’d rather drink antifreeze than vote for any tax increase…I don’t want [the county] coming to us for cover to get a tax increase.” Danko’s antifreeze analogy referenced a campaign promise in last year’s election, where he framed his opposition to tax increases in the same terms. Many exited the room, and the discussion concluded.

“I think it puts the county in a tough position,” Klufas said after the meeting. “I think funding our emergency services and our police forces is something that should be a priority for all Council members, and I think some of our Council members chose a poor way to use their political capital, to make their stand on a half-cent sales tax that will support our police officers and our fire safety.”

Danko also spoke on the issue from his perspective. “I was waiting for us to get to the resolution. And then we normally have Council, so I thought there was a little too much discussion before we got to the public and then back to the Council. I held off until after we had made the motion. Normally we don’t have that much discussion until a motion is made and seconded. It’s always good to ask questions of who’s ever presenting, which I did. I asked about the insurance question, which they couldn’t answer. But the rest of the discussion went a little too far, which is why I just held back until we got to the vote.”

On whether he was pleased with the outcome, Danko added: “I’m totally pleased with the outcome. When I told voters I’d rather drink antifreeze than vote to raise their taxes, it wasn’t a campaign slogan. I meant it. I will never vote for a tax increase. We need to learn to tighten our belts and cut the wasteful spending, like the $47,000 we gave a City Manager for being here for less than two years. There’s plenty of waste. Let’s start finding it, let’s start cutting it.”

In Item 11, the Council was tasked with appointing one of its members to an oversight committee. Councilman Klufas and former Mayor Milissa Holland had previously been chosen as the Council’s two selected members, but the resignation of Holland in May. The Council chose Victor Barbosa to take Holland’s place.

After three final Consent measures, a last portion for public participation took place. One Slow Way resident advocating for its closure described the meeting with Councilman Barbosa Monday night, in which she’d been confronted aggressively by members of the opposite mind. “I’m simply trying to do the correct thing to make the neighborhood safe for the residents of the city,” the resident said, before revealing she would likely move away out of concern for personal safety. One more resident approached to speak against tax increases, and public comments ended. Branquinho rebuked those who’d purportedly threatened the Slow Way resident.

Victor Barbosa then raised a motion to change the Council meeting schedule, allocating two to take place in the evening and one in the morning. Danko immediately seconded. Attorney Reischmann clarified that changing the meeting schedule would require an ordinance amending the City Charter, and that action could not be taken presently. Branquinho asked about the ability to bring the new Mayor into meetings, and Danko joked about Lowe already being in the audience. Barbosa reiterated that he’d heard complaints from residents about scheduled meeting times, particularly from those whose work schedules prevented them from attending morning meetings. Alan Lowe took the podium again and concurred with Barbosa. A vote was taken to change the ordinance; it failed 2-2.

The Council, Reischmann, and Bevan then gave their final comments, and the meeting adjourned.

UPDATE 2:25 pm: Michael Arnold, the citizen who criticized City Attorney Bill Reischmann in the public comments section, has stated on Facebook that he filed a complaint with the Florida State BAR association today.