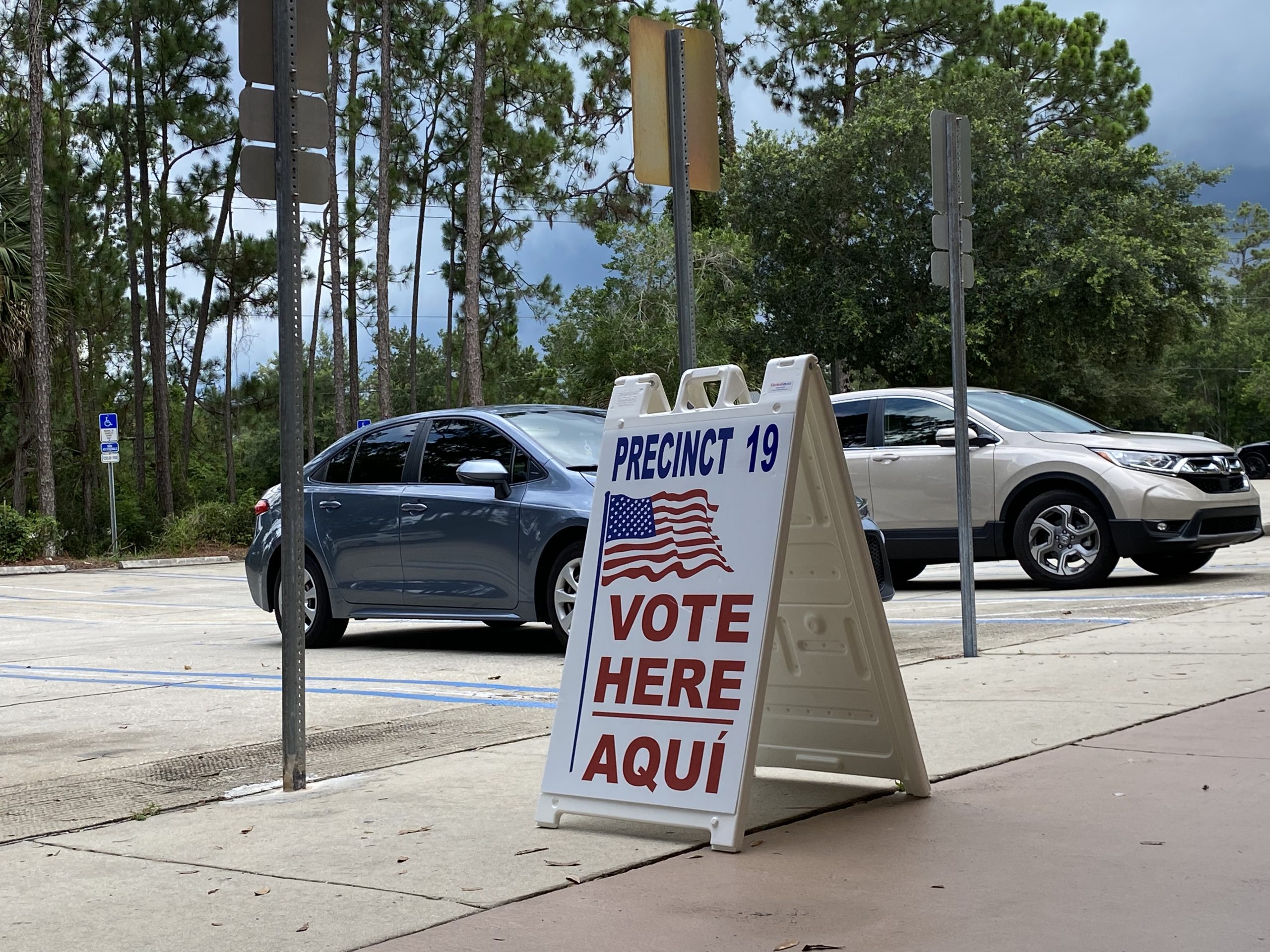 At last, the big day has come. Palm Coast residents are making their way to their precinct locations and casting their ballots to elect a new figurehead for the City Council. Candidates Alan Lowe, David Alfin, Cornelia Manfre, Doug Courtney, Kathy Austrino, and Carol Bacha eagerly await good news, as do their supporters.

It’s never the wrong time to wonder – what name are we going to see blowing up the headlines later on this evening? Even so close to the election, it’s hard to tell. There are scenarios that could lead to several different candidates clinching victory. In this feature, we’ll attempt to outline what might need to happen for each candidate to win the race, and what their odds are looking like this close to the polls closing.

David Alfin is a realtor, and one of four Republican candidates to have entered the race. This is his second bid for elected office, having run for Palm Coast City Council last year.

Why will David Alfin win the election?

Alfin has had a strong outpouring of support in the community since he announced his campaign. He comes across as a candidate who knows his way around a business setting, and has pushed hard to make sure voters are aware of it. Alfin secured endorsements from two Council members, Palm Coast Observer publisher John Walsh, and from Palm Coast Professional Firefighters Local 4807. People with pull in Flagler County are putting their seal of approval on Alfin, and it’s hard to imagine that won’t translate for at least something.

Flagler County Republicans are somewhat split right now, and where Alfin might enjoy a more uniform support from the right in a different race, he’s having to fight tooth and nail for even those on his side of the aisle. Furthermore, Alfin has made multiple unforced errors in this election. He cancelled a speaking a lot with a Flagler Pride event last moment, earning his criticism, was shown to have shared a Cameo video from conservative commentator Tomi Lahren with the site’s watermark edited out, and has come under fire for DUIs earlier in life as well as having left the Naval Academy decades ago. The bad press and social media buzz against Alfin has been intense, so time will tell how much it dinged his hopes to assume Palm Coast’s Mayorship.

Kathy Austrino is also a realtor, as well as a community activist and organizer. This is her first campaign for elected office.

Why will Kathy Austrino win the election?

Not every candidate is particularly polarizing, but Kathy might truly have the fewest ‘haters’ out of the six. Pointed criticism at Austrino is few and far between, though it has happened. Austrino has built a reputation as someone who takes an active role in the community, and it’s not hard to envision her taking the Mayor’s seat in next month’s meetings.

Not being disliked isn’t on its own enough to actually secure votes. Austrino missed a couple candidate forums earlier in the race due to scheduling, and has not been as active in campaigning as some of her fellow candidates.

Carol Bacha is a nun and medical ethnomusicologist, having worked in the medical field for decades. She most recently appeared on the ballot in a Flagler County School Board race last year, when she ran against incumbent Colleen Conklin.

Why will Carol Bacha win the election?

Like with Austrino, it’s hard not to like Carol Bacha. She emanates warmth and creativity in her campaign appearances, certainly a sharp contrast from a recently vitriolic City Council. Bacha has also delivered some of the most memorable answers at candidate forums and debates, offering a perspective on the issues entirely unique from her competitors.

Name recognition and public awareness have been problems for Bacha so far, placing scarcely any road signs in Palm Coast and not having a strong online presence. Her approaches to some issues might also be seen as too far outside the norm for some voters, even if she can’t be knocked for unoriginality.

Doug Courtney is an author and former Palm Coast government employee with a doctorate in management from the University of Phoenix. He’s run for office in the past, including a race against Milissa Holland for the State House of Representatives.

Why will Doug Courtney win the election?

Courtney has enjoyed the support of many young progressives in Flagler County, giving his campaign a unique enthusiasm. He’s appeared all over the campaign circuit at forums, debates, and sign-wavings, and has spoken at community events when able. It’s hard to envision anything else Dr. Courtney could’ve done to strengthen his campaign, so whatever happens tonight, he can say he left it all out on the table.

Fellow candidate Cornelia Manfre has secured the support of the Flagler Democrats’ old guard, which usually carries with it most of that voting block. He was also a little lesser known than some of the other candidates coming in, which could work to his disadvantage. And of course, the solidly red Palm Coast will be tricky for a Democrat to win, though not impossible. Courtney is fighting that same uphill battle against not only a Republican majority, but another Democrat simultaneously.

Alan Lowe is a semi-retired handyman, inventor, and scuba instructor. Lowe ran for Mayor last year as well, falling just short to Milissa Holland, and was running for City Council until the Mayor’s seat reopened.

Why will Alan Lowe win the election?

Have you logged onto Facebook lately? Needless to say that’s not enough on its own, but it’s proof that his supporters are vocal, passionate, and not exactly scarce. Lowe has attended almost every City Council meeting since his November defeat, speaking at the podium, shaking hands, and becoming known to the kind of resident who’d attend a Council meeting. He’s got the endorsements of two Council members, and is active with the Flagler Trump Club. And while Lowe has caught a couple bad headlines in the last couple weeks, he’s still got that loyal, solid base of voters who aren’t going anywhere.

Like Alfin, Lowe is a major contender for a limited number of Republican votes. It’s hard to tell how much that’ll hold him back. Lowe has his share of baggage as well; though he’s maintained that they’re non-issues, he did only first vote in 2020, and had some degree of resonation with the sovereign citizen movement in the 90’s. As with any candidate’s baggage, the point isn’t whether these are actually legitimate blemishes on his past, it’s whether voters perceive that they are. And while those things probably didn’t sink his chances altogether, they’re not irrelevant to his prospects either. Furthermore, Lowe has been attacked aggressively in mailers and text blasts from organizations supporting Alfin, if not Alfin’s own campaign.

Cornelia Manfre is a realtor, and longtime negotiator in the corporate world. This is her second run for elected office, having ran for Palm Coast City Council last year.

Why will Cornelia Manfre win the election?

Cornelia is the textbook definition of a dark horse. A lot could happen in how the Republican vote gets split up, and with Manfre enjoying a potentially more solid portion of Democratic support, an even split between Lowe and Alfin voters might just be enough for her to take it. Manfre is more than just the potential spoiler winner though; she’s sold herself well as a skilled mediator with a history of bringing jobs to Flagler County. Manfre’s prospects might also hinge somewhat on impressions of her husband, former Sheriff Jim Manfre. They’re not the same person of course, but it could be an object in some voters’ minds, either as a positive or a negative.

We don’t need to repeat how hard it is for Democrats in Palm Coast, see Doug Courtney’s section for that. But it is though, and Flagler County didn’t see too many upset winners last year. We’ll put the Jim Manfre association in both columns here, because it’d be impossible to truly gage that effect without a whole separate poll on the former Sheriff. And of course, it’s certainly possible the Courtney coalition is the difference-maker for Manfre as well.
____________

If there’s still time when you read this, make sure to vote in the Palm Coast Mayoral election. Voting resources are available at the Flagler Supervisor of Elections website.