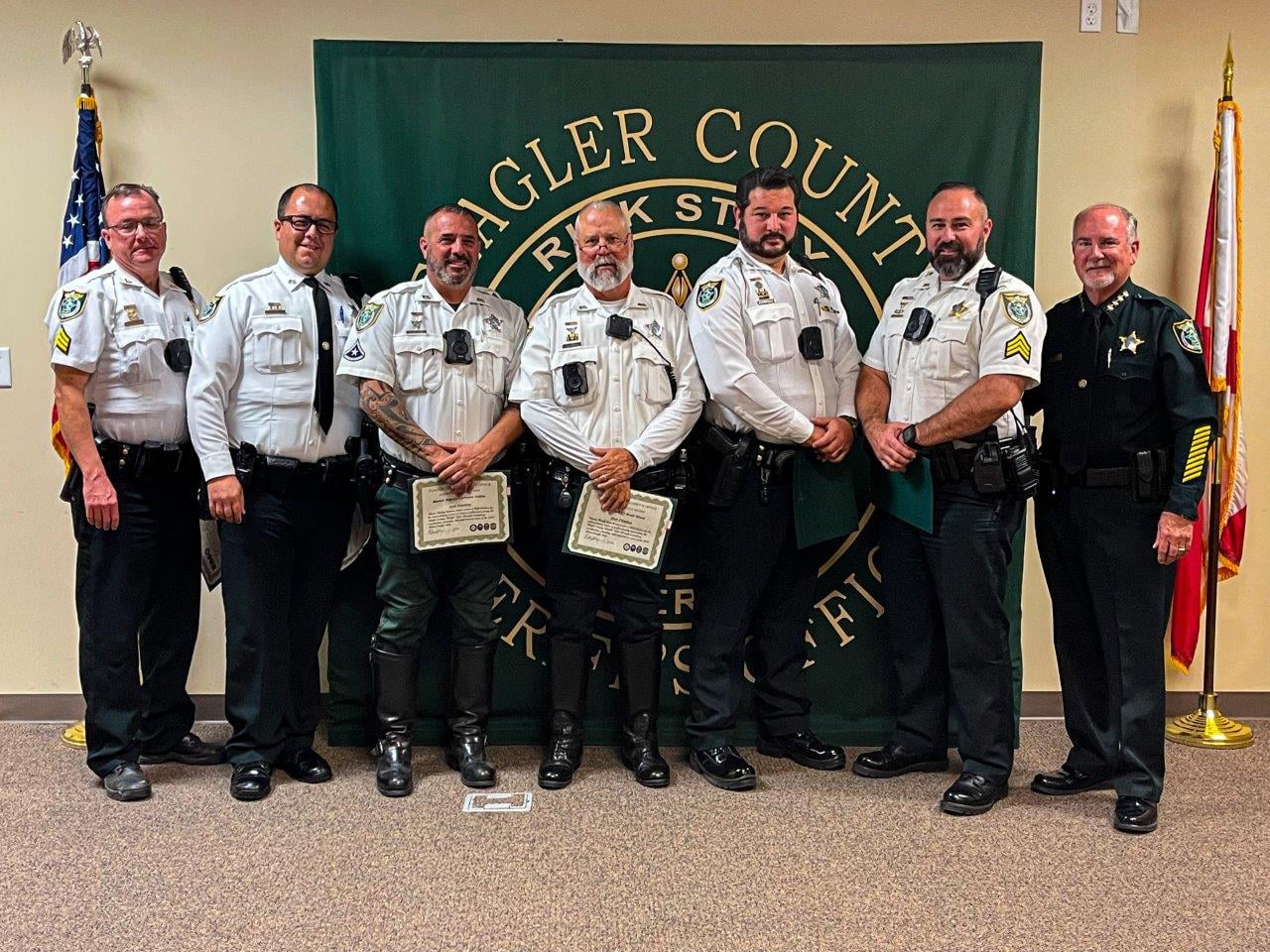 The Flagler County Sheriff’s Office (FCSO) celebrated those who serve and protect Flagler County with the 2021 Fourth Quarter Awards Ceremony Monday inside the Kim C. Hammond Justice Center in Bunnell. 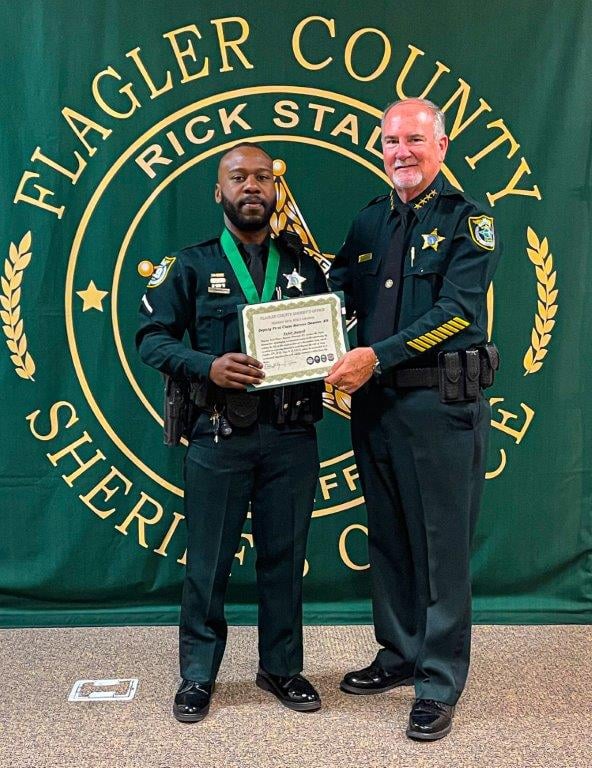 During the ceremony, Sheriff Staly recognized exceptional service by FCSO employees and members of the community, including Deputy First Class (DFC) Marcus Dawson for his life-saving heroics when he rescued a three-year-old boy from a house fire on October 17, 2021.

The following FCSO employees received awards for the 4th Quarter of 2021.

Responded to a house fire on October 17, 2021, where he was the first on the scene. After entering the home, he called out looking for people trapped inside. He would find and rescue a three-year-old boy hiding under a blanket inside the home.

An 11-year-old boy who called 9-1-1 after his mother had passed out and made it possible for responding units to be immediately dispatched and arrive at their home to care for her.

Responded to a call where a man had overdosed. After assessing the situation, he gave the necessary treatment that helped save the man’s life.

After answering a 9-1-1 call reporting a man on the roof of European Village was unresponsive, he provided life-saving instructions to the caller. This included how to administer CPR until responding units arrived eight minutes later.

Responded to a call where a man had overdosed. After assessing the situation, he gave the necessary treatment that helped save the man’s life. Deputy Aaron Clay: Responded to a single-vehicle accident, assessed the operator who was having a medical crisis and provided treatment helping the patient survive.

Responded to a call where a man had overdosed. After assessing the situation, he gave the necessary treatment that helped save the man’s life.

Responded to a call involving a man who was unresponsive. After assessing the situation, he administered medication and CPR to help save the woman’s life.

After answering a 9-1-1 call from a woman reporting her father was having a medical episode, she instructed the caller on how to administer CPR until authorities arrived on the scene.

Responded to a call at a residence where they found a woman unconscious and shallow breathing. They administered proper treatment including the use of an AED, performing CPR and Narcan until the arrival of paramedics who administered more Narcan and the woman regained consciousness. 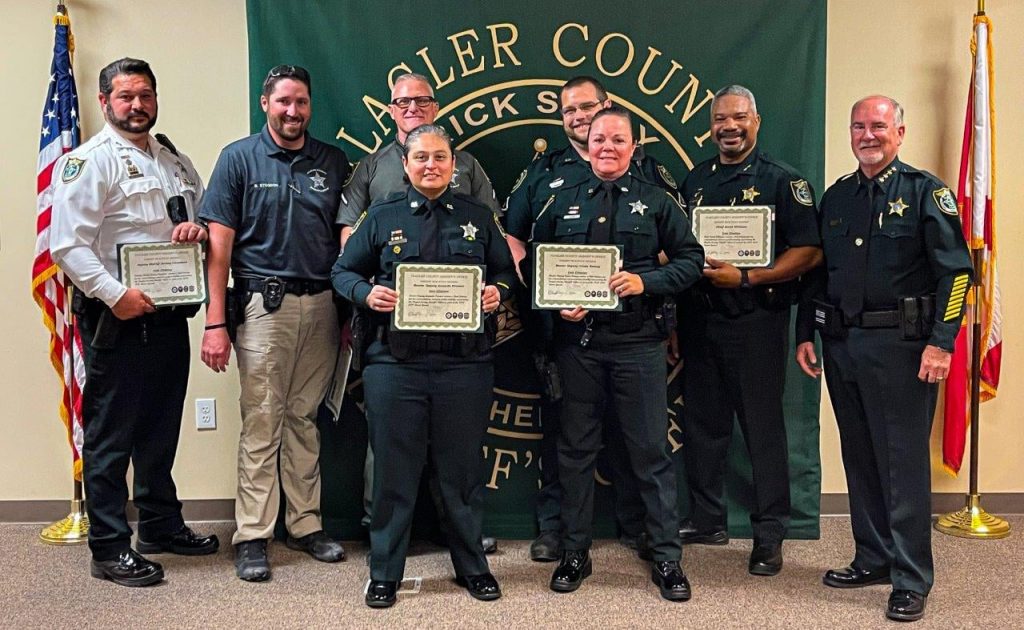 Helped located a wanted man using numerous resources to help law enforcement in another state find him and take him into custody.

Communication Specialist Lainie Rittenour: Answered a 9-1-1 call from a mother in labor. Within four minutes, the baby was crowning. She guided the caller through the steps of helping deliver the baby.

Deputies teamed up with a child as they shopped for presents. 122 children took part in the event which helped spread cheer at the holidays.

COP Paul Matarazzo and COP Bernard Kershner: Responded to a call in the FCSO COP Marine Boat to a canal where a man was found in distress against the seawall. Not able to pull the man out on their own, they called for assistance. After pulling him from the water, they began to perform CPR on the patient.

Assisting the Sheriff’s Police Athletic League (PAL), she played a huge part in several events this year including “Shop With A Cop.” On a regular basis, she helps plan activities and games for PAL and all of the children who take part. Behind the scenes, she is a major reason for the success of the events for children.

Going above and beyond her normal duties, she donates her resources to involving children and Sheriff’s Police Athletic League programs.

Involving a fraud case with more than 100 victims, she was a key part of the team (Community Policing Division) tasked with organizing and summarizing of each individual interview in the case. Victims lost more than $850,000 as a result of fraud and the case was turned over to IRS Investigations.

Always going above and beyond her normal duties to involving children in the community in Sheriff’s Office programs that affect them.

The men and women of the FCSO Honor Guard played an important role in honoring our fallen law enforcement officers and their families in 2021. They will continue to serve in 2022 as these heroes who left us too soon will be honored on the state and national level in the coming months.

“Getting to recognize the brave men and women of the Sheriff’s Office is a true honor for me,” Sheriff Rick Staly said. “Having this opportunity each quarter to pay tribute to our sworn and professional support employees who support Flagler County is always special. Thank you to all the members of our FCSO family for their service and dedication.”