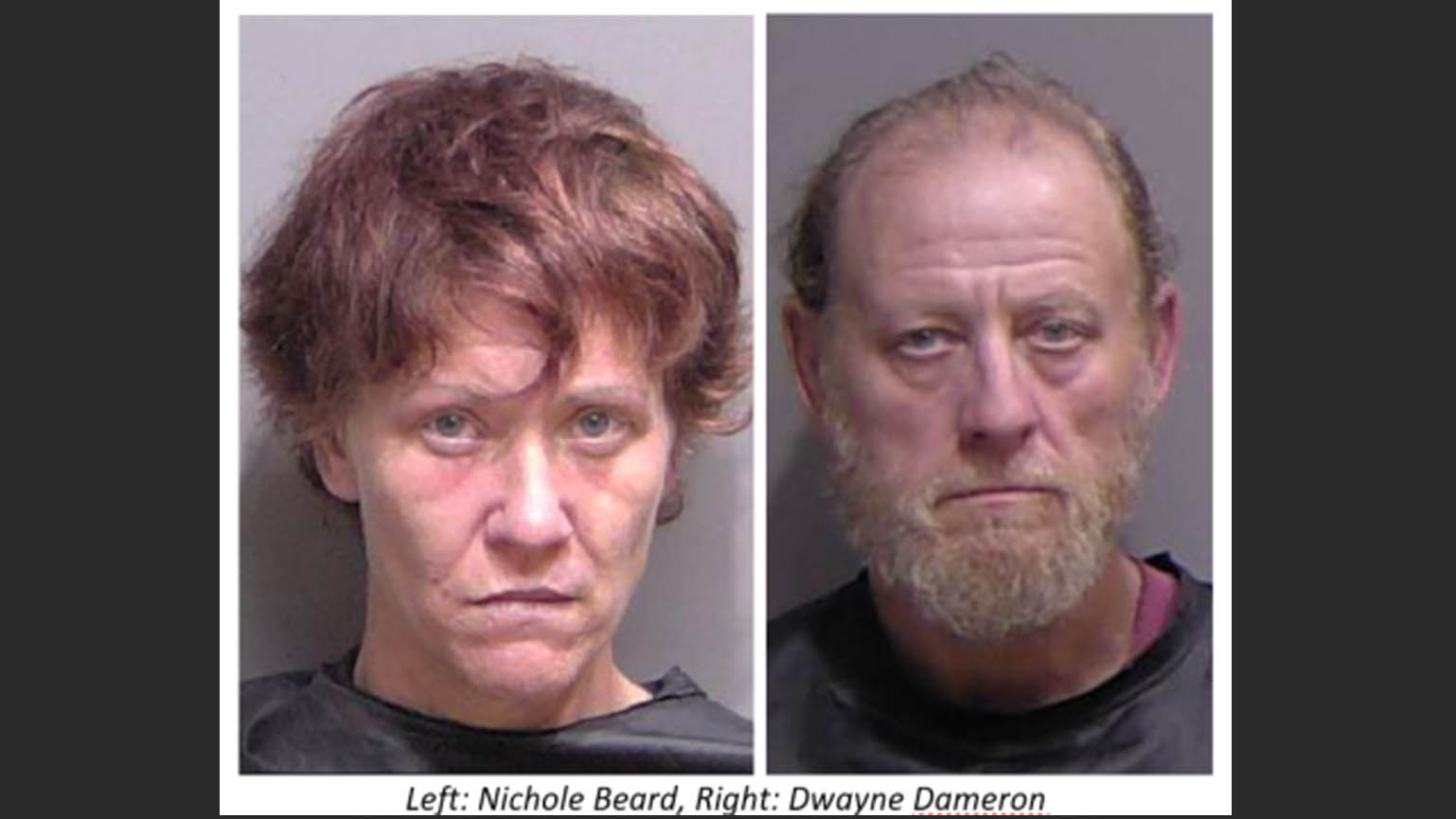 On Tuesday, March 23, 2021, the Flagler County Sheriff’s Office (FCSO) responded to Nutwood Avenue, Bunnell, in response to a medical call. The victim stated that he had been shot in his arm one hour before by a man, later identified as Dwayne Troy Dameron (DOB: 9/28/1969), and needed emergency medical assistance.

The victim was transported to Halifax Health Medical Center for treatment. Once there, he told deputies that he believed he was shot because he had been fighting with his girlfriend, Nichole Beard (DOB: 10/21/1980), earlier that day.

The victim further stated that on more than one occasion the arguments had become physical, resulting in Beard stabbing him twice in his right arm and him leaving her residence.

A short while later, the victim returned to Beard’s trailer to retrieve a toaster and found Dameron waiting for him outside. The victim stated that Dameron would not allow him to come near the trailer, threw the toaster at his feet, and threatened him with a silver revolver. The victim then kicked Dameron’s pickup truck, at which point Dameron drew the revolver and shot the victim in his left arm.
The victim stated Dameron was immediately apologetic and told him he was only intending to fire a “warning shot”. Dameron gave the revolver to Beard and then offered to take the victim back to his house where he could render first-aid. The victim went with Dameron to his residence where Dameron applied bandages to the gunshot wound, as well as promise to “take care of him” by offering to give him a vehicle and then drove him back to the victims residence.

The victim stated he was reluctant to call law enforcement because he did not want Dameron to get in trouble but felt he had no choice since the wound would not stop bleeding.

Deputies then made contact with Beard at her residence and questioned her about the incident. Beard stated that the arguments did get physical but indicated she was only acting in self-defense. In regards to the shooting, Beard told deputies that she did ask Dameron to come to her residence after arguing with the victim but that she did not witness the shooting. Beard confirmed that she did take the revolver from Dameron before he and the victim left the scene and returned it to him when he came back. Beard also stated that Dameron told her that he intended to burn the clothes he wore when the shooting happened. After the interview, Beard was arrested.

When questioned, Dameron admitted to shooting the victim but claimed it was accidental. When asked about the current location of the firearm, Dameron told deputies that he had buried the gun that was used in the shooting and burned the clothes he was wearing during the incident. The firearm and clothing were both recovered.

“I am grateful that the victim was not more seriously injured and that we were able to get him the medical care he needed,” Sheriff Staly said. “This is an example of how a domestic dispute can quickly escalate into a more critical situation. No relationship problem is worth going to jail over or losing your life. If you need help call us before the situation becomes dire.”
Nichole Beard and Dwayne Dameron were arrested and transported to the Sheriff Perry Hall Inmate Detention Facility.

Beard is charged with Domestic Battery and is being held on a $1500.00 bond.