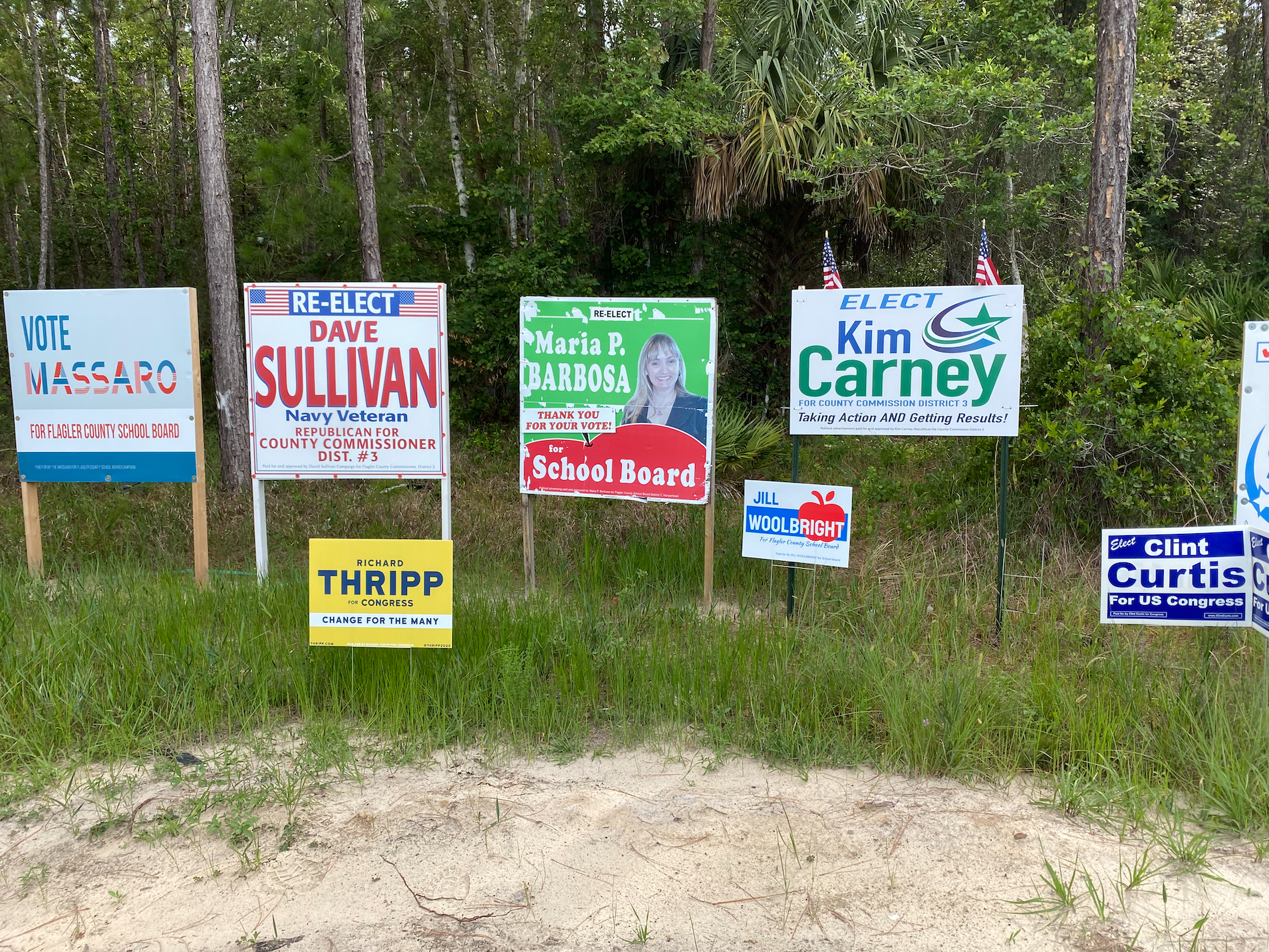 Every even-numbered year in Palm Coast, the town is slowly filled with swaths of campaign signs from local, state, and national candidates for office. They pop up north of the Smokey the Bear sign all the way south to Old Dixie Highway and everywhere in between. Whether you’re political or not, you’re bound to know at least some of the people running for office solely from seeing their signs. If you’re just driving around town, you might never notice the coming and going of certain signs; they tend to appear and disappear without the average resident ever realizing. But how and why do campaign signs get taken down before they’ve officially served their purpose? If you’re one of those dedicated few people running for office, campaign sign politics is a very real and very frustrating thing. 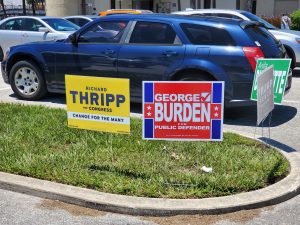 2020 campaign signs of Richard Thripp for Congress and George Burden for Public Defender.

Most campaigns send volunteers out to drive around town, putting 24″ x 18″ signs along the side of the road in the most traffic-heavy locations they can find. Usually, there isn’t a centralized strategy around picking locations, which means sign placing is largely up to the discretion of the volunteers. Lots of times, a well-placed sign can even turn into a temporary landmark in the community. Still, other times campaign signs may only be up for one or two days before vanishing mysteriously. There are two main reasons signs get taken down before the election they’re for: vandalism, and code enforcement.

Vandalism of campaign signs is persistently common in Flagler County. Often it’s candidates with more detractors, such as the two presidential candidates, who experience vandalism at the highest rate. Some campaigns suspect vandalism has correlated with political parties, others see it as rogue agents acting on their own accord. One such candidate who’s raised concerns about partisan vandalism is Richard Thripp, former Democratic candidate for United States Congress.

“No one should steal or deface campaign signs,” Thripp says. “When we see it happen, both in Flagler and Volusia counties, Democratic signs are targeted the majority of the time. In fact, I had my Democratic campaign signs stomped on in one occasion and stolen in another, along with my car being keyed. People with Trump signs do not seem to have much of a concern about being targeted nor are they targeted with much frequency. Advocates for ‘law & order’ should behave lawfully and orderly.”

Meanwhile, others like County Commission candidate Paul Anderson, find vandalism as a sign that their campaign is simply hitting the right nerve. Asked to elaborate his theory, Anderson told AskFlagler: 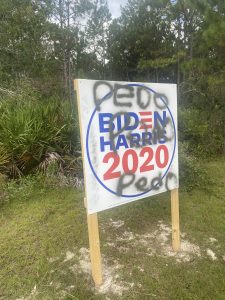 A Biden-Harris sign in Palm Coast after being vandalized. (Laura Alvarez)

Anderson is right that sign vandalism is a misdemeanor, and his outlook certainly makes sense: you’d assume the candidates most likely to see vandalism against their campaign are the ones who outrage their ideological opponents the most. And typically, candidates who do that are also around haphazardly depositing signs in unwilling residents’ yards. And the principle holds for undeveloped land as well, it’s obvious that landowners should control their lots regardless of whether there’s a house or business on it. But the problem comes when candidates are left to more or less guess where private property ends and city or county land begins. In many instances, campaigns see signs removed with no reason relayed to them, and no apparent recourse for recovering the sign. making quite the positive stir on their own side.

Another challenge of local candidates’ campaigns is regional code enforcement. Flagler County does have an official policy pertaining to campaign signs, but for many, enforcement seems to be an enigma. One portion of the code that seems to become troublesome is its first rule, which states that signs on private property must only be placed at the consent of the property owner. Of course, this makes perfect sense for residential yards, it’d be a different problem entirely if campaigns were driving around haphazardly depositing signs in unwilling residents’ yards. And the principle holds for undeveloped land as well; obviously, landowners have control their lots regardless of whether there’s a house or business on it. But the problem comes when candidates are left to more or less guess where private property ends and city or county land begins. In many instances, campaigns see signs removed with no reason relayed to them, and no apparent recourse for recovery.

One candidate who’s frustrated with county-sanctioned sign removals is Victor Barbosa, a contender for Palm Coast City Council, District 2. According to Barbosa:

“It’s not so much sign vandalism, it’s the mayor having code enforcement picking up our signs and throwing them away. Years ago they would put them behind public works building, and you could go there and pick them up. It’s sad because it cost a lot of money for them. Another thing is other parties putting their signs in front of yours so people get confused what party you’re affiliated with.”

Barbosa is one of many who believe mayor Milissa Holland is partly to blame for erroneous removals. On whether sign policy is due for an update, Barbosa added:

“They should contact [the] election office and have us move it. They are picking and choosing because of the mayor.”

Holland has also faced criticism for purportedly allowing her own signs in areas where other candidates see their signs removed.

For most local campaigns, the cash supply is simply not deep enough to keep replacing vandalized or removed signs. If a sign was defaced at a certain location, it’s likely an identical one won’t appear there again, as most choose to simply refocus efforts on areas where signs stay up. In cases of vandalism, sometimes spray paint or ink can be scrubbed off, while other times candidates have to take the loss. It’s a dirty play, but it’s easy to see why perpetrators of vandalism view their tactics as effective.

Increased concern over lost and vandalized signs comes in the wake of a statement from Supervisor of Elections Kaiti Lenhart about the prospects of voter intimidation at the polls this season. Lenhart rebuked County Administrator Jerry Cameron, who controversially ordered construction that blocked the main path to one of three polling locations in Flagler County.

“What we have seen is a true example of the unprofessional and divisive behavior that this country has resorted to. The flagrant and abusive nature of violating state and local campaign laws shows that some people can’t and do not want to accept change. Change is always hard for some to overcome but it can be done. It’s tiring for me personally to continually erect and display my campaign signs in areas of the county that seek such change, while there remains a select group of individuals who do not wish to see me take office. I use this as continual motivation for my campaign team and myself to knock on more doors and talk to just that many more Flagler County citizens. We can create change, break barriers and build futures for a Flagler that works for all of us.”

Click for resources on how to vote this election season.

Our thanks to Richard Thripp, Paul Anderson, Victor Barbosa, and Larry Jones for contributing their experiences to AskFlagler.